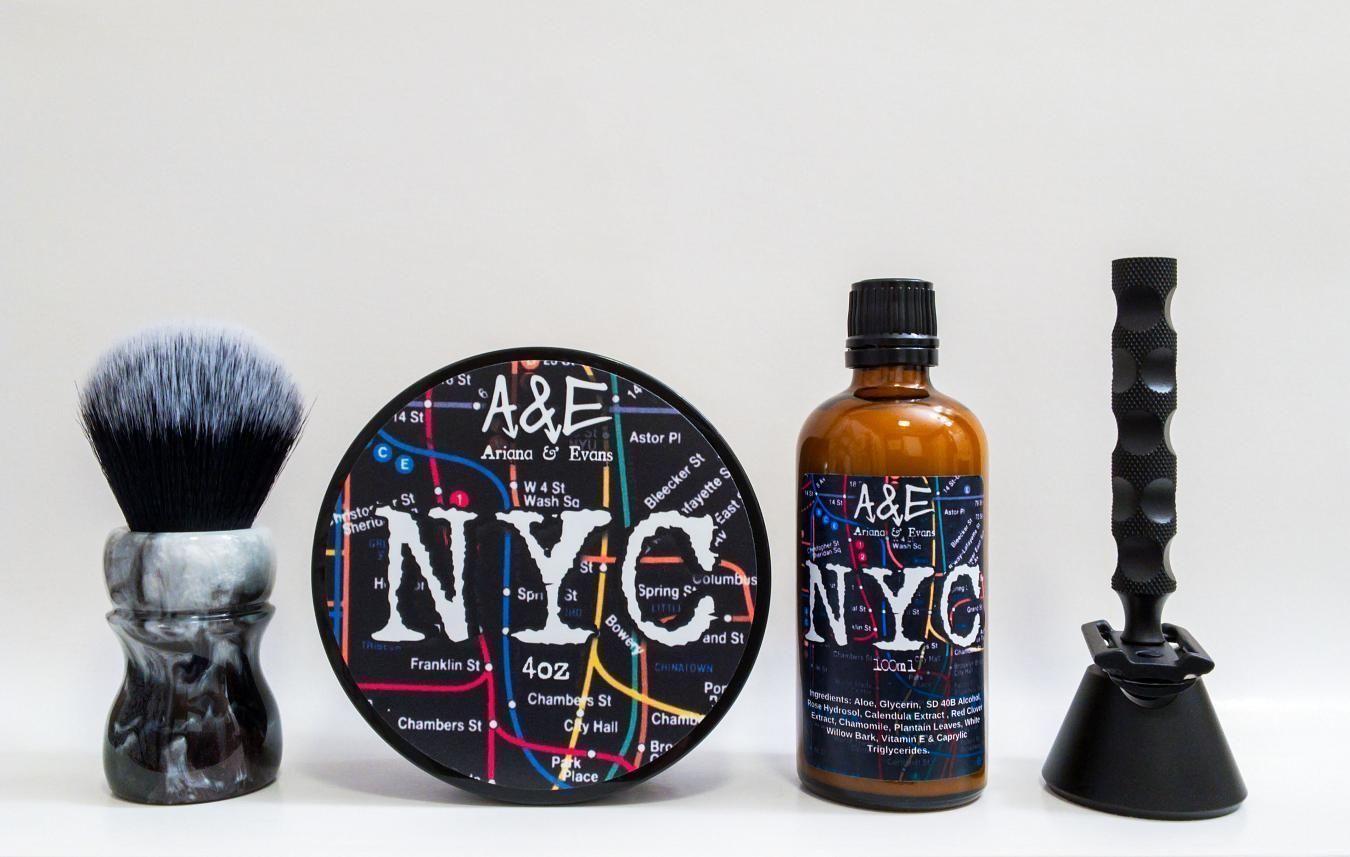 Another intoxicating scent by Ariana & Evans called NYC in a #soap and #aftershave that's a Limited Edition and only available from Pasteur Pharmacy in NYC!

Smokey, gritty, masculine. This Fougere is sophisticated, complex and redolent.

I’m making this as a special soap for my friends at Pasteur's. This exclusive product will only be available at Pasteur's and VIP Members here at The Club.

For a background on Ariana & Evans check out the appropriately named article; What is Ariana & Evans? Check out my earlier reviews of L'Orange Verte, Asian Plum and Khalifa for much more info. Today I'm checking out NYC which is a Pasteur Pharmacy (and VIP club member) exclusive. As with the three prior - the artwork, branding and packaging are excellent. The underlying subway map of New York City as the artwork nails it.

The NYC scent is robust, lovely and just lasts. It features notes of lavender, geranium, orange, anise, chamomile, tobacco, sandalwood, vetiver, patchouli, cedar, hay, cardamon and musk. If that sounds at all familiar, it's inspired by (and not a clone) of Azzaro Pour Homme (which has top notes of caraway, iris, lavender, clary sage, basil, anise, bergamot and lemon; middle notes of sandalwood, juniper berries, patchouli, vetiver, cedar and cardamom; and base notes of leather, tonka bean, amber, musk and oakmoss). As you can see, they're similar, but distinctly different - NYC is its own unique beast. It's more accurately called an aromatic fougére (as Azzaro Pour Homme is) as they contain additional notes of herbs, spice and wood. It's described by Peter thusly:

I wanted to get the grit and masculinity of NYC, but in a beautiful cologne type scent. I'm really pleased how it came out.

I'd have to agree on all points. On open you get the lavender and geranium for a floral hit as the herbal chamomile and citrusy orange come in with just a hint of anise at the end to sharpen things up... Making a nice segue into the tobacco and sandalwood that announce the earthy, green vetiver, hay and patchouli middle. Cedar is one of the last notes to develop in the middle and lingers as the base of cardamom and musk takes shape. The classic fougére component of oakmoss in the base is instead represented by the tobacco in the middle; both are woody, sharp and slightly sweet - while coumarin is replaced by the hay; both smell similar. The entire transition through the tiers takes about 15 minutes or so. Both the soap and aftershave scent strengths are a high medium with the former blossoming further when lathered. I could smell it easily for the duration of the shave. The aftershave has a medium sillage, but a good longevity at 6+ hours.

The performance of the soap also lives up to the hype. Loading was fairly easy, rather reminiscent of Declaration Grooming soaps. Once loaded, the soap lathered up very easily in the #GTP scuttle. The lather is thick and creamy, with very good primary and secondary slickness - and resulted in very good face feel. Just for the sake of completeness, the ingredients of the soap, followed by the aftershave are:

The aftershave performance was very nice. Despite containing alcohol, it has a fairly mild bite. A lot of the ingredients come from the artisan's serums, which were added to the aftershaves by popular demand. In the context of the soap as a combo, both products performed above their price point(s). The soap goes for $16.99 and the aftershave $18.50... Not bad at all, earning them strong value for the money.

The hardware consisted of The Assassin Razor which is technically a The Shaving Shop product rather than #arianaevans. It's a fairly typical three-piece design; the handle is made of stainless steel while the head is made of zinc alloy (a.k.a. zamak). The handle is the only real reason to get this razor - it's badass. The head is a poor clone of the Mühle R89 head. Because of the thick matte black coating, the fresh #PolSilver razor blade would not easily insert and remained rather distorted until the handle was tightened down, forcing it flat. The ends of the blade stuck out of the head's ends more than most razors I've seen. Ugh. All that said, it did shave nicely; though very mild. Rather similar to a real R89 head, though not quite as efficient. I'll be replacing the head with a Matte Black Mellon Safety Razor Head Without Logo from Yaqi and really murder this razor out. The brush was an understated black and white piece from #LowbornSupply with a 24mm Tuxedo knot.

Another very pleasant shave with Ariana & Evans soap, bolstered by the matching aftershave. Performing above their price points, it's an excellent value - the soap is up there with say, Wholly Kaw (but not quite Declaration Grooming) in its ranking. The aftershave is similarly high quality, but not up to Barrister and Mann or Chatillon Lux standards. Regardless, I find these Ariana & Evans offerings in the (increasingly crowded) top tier. Finally, the scent of NYC is the real raison d'etre here!