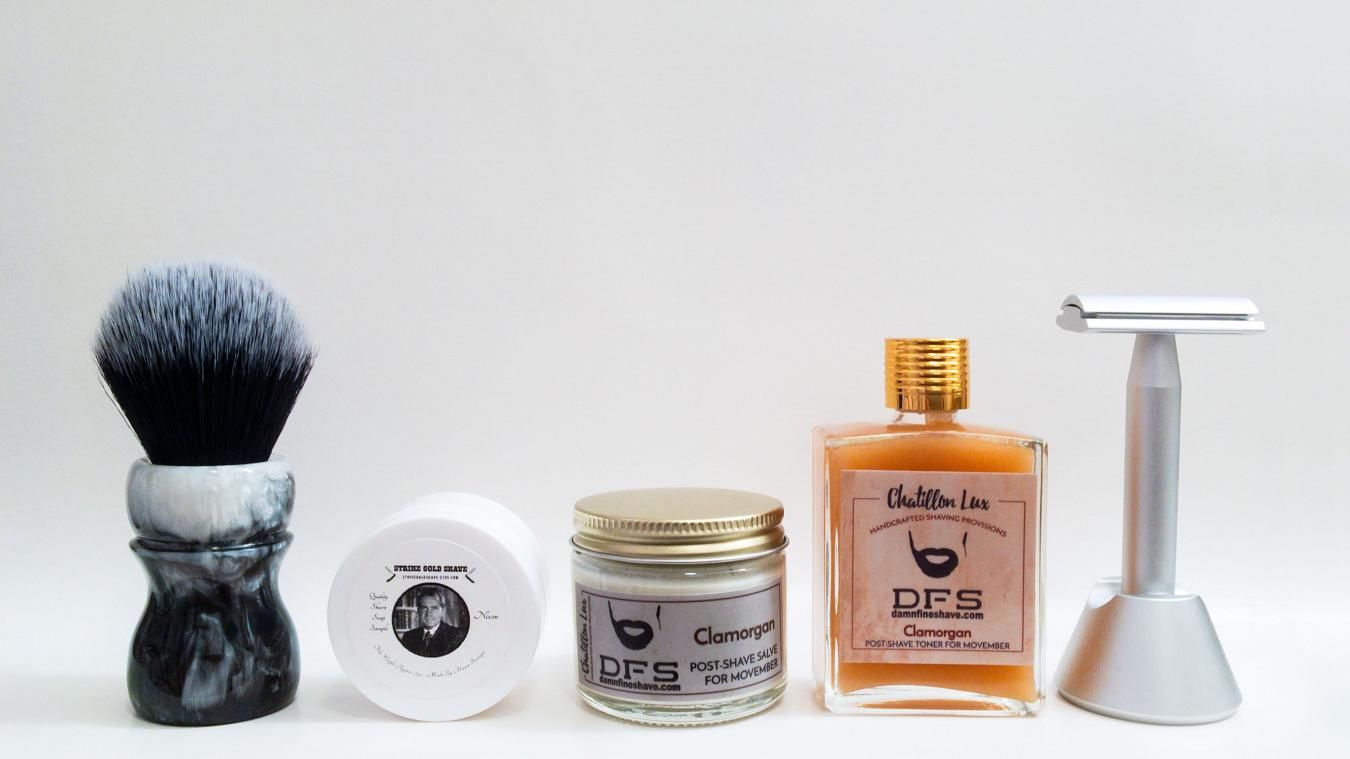 Shaking off the snowy winter doldrums with heaps of citrus, thanks to Strike Gold Shave Nixon #soap and Chatillon Lux Clamorgan #balm (salve) and #aftershave (toner)!

Just a quick note here on the charts above... I rated the #StrikeGoldShave soap under the Value and Lather sections and the #ChatillonLux balm/aftershave under Post-shave and Scent.

You will love this fabulous sweet and sour blend of fresh Sorrento lemons, cane sugar and a hint of lemon zest, inspired by Italy's beloved Limoncello.

The official scent of the Nixon soap includes notes of lemon, cane sugar and lemon zest. Indeed, it's a fairly simply accord, but it's a very nice lemon overall and does suggest Limoncello. Somewhat potent and slightly sweet, it reminds me a bit of Derby Lemon shaving cream, but a bit more natural. I'm a big fan of citrusy scents, though more so in the warmer months. Still, on a cold and snowy winter's day, it's definitely uplifting. As for the soap itself, I have to admit that I was a bit leery. See, the somewhat infamous base is made by the now defunct Mason Boutique. They will continue to make the soap for Strike Gold Shave however.

I didn't notice anything out of the ordinary with the soap other than it has a somewhat light, airy base. Since I had a sample, I scraped a fairly good amount out, put it in the scuttle and lathered it up. There's a good chance I used too much as the lather filled the scuttle and was very fluffy. It reminded me of the older Synergy formulas from PAA yet decidedly fluffier. Not necessarily a bad thing, but quite different from the soaps I'm used to these days, which tend to make creamy, yogurt-like lather. Slickness was outstanding, both primary and secondary. While I think that dialing in the soap would definitely help, I suspect it will remain of the fluffy sort, though perhaps only slghtly so. Regardless, the soap performed rather well despite the hit on cushion. I'd certainly use it again, and if/when I do, I'll update the chart above as necessary. The ingredients are fairly simple:

One shouldn't judge an artisan's offerings from samples, as they don't always reflect the best experience. The packaging is no different, yet it's identical to the full-sized tubs. A fairly nice white plastic tub, with a more disappointing matte paper label printed in black. I suspect it's not waterproof in the slightest, though it did hold up perfectly through this shave. The naming scheme of the artisan, former President's names - is as equally odd as Mason Boutique using female names.

Clamorgan was a very limited release including a total of 75 aftershaves, 40 salves and 30 toners. What you see above is one of each of the latter two; one toner and one salve (balm). The scent has notes of lemon, bigarade, petitgrain, mandarin, bergamot, oakmoss, basil, ginger, patchouli and musk. There's no mistaking this scent as a very citrusy "barbershop" - whatever that really is - as it's not a proper scent category and there are a lot of interpretations. If you get the gist, this certainly fits; though it lacks the common powdery vibe.

The top notes include lemon, bigarade & petitgrain (both from citrus aurantium a.k.a. bitter/sour orange leaf), mandarin and bergamot... All are essentially lemon and orange with bitter components. The middle starts with the slightly floral, woodsy bigarade and mingles with the spicy, herbaceous basil - and ends with the similarly spicy, warm, woodsy and earthy ginger. As the scent further dries down, the green and earthy oakmoss and patchouli, respectively, settle in with the musk. The earthiness of the ginger and patchouli make a nice segue, though the ginger is a bit piquant until it fades. The scent strength of the toner is strong, with medium sillage and longevity of 4-6 hours.

The performance of the salve (which I used on my face) and the toner (which I used for scent elsewhere) is of course, typical Chatillon Lux and simply outstanding. Despite having used it countless times, it never ceases to amaze me that you really need very little of the balm for application. Leave (or make) your face slightly damp, gather up not even a pea-sized amount of the balm and rub it between your hands - then massage it into your face. Just a divine face feel.

Hardware for today included the raw-colored #StandardRazors with a #PolSilver blade on shave two. The #LowbornSupply brush made quick work of generating the impressive heap of lather in the #GTP scuttle.

I was pleasantly surprised with the soap. While it likely needs a little dialing in, the fluffy lather isn't really my style these days. That said, it was very slick - think Taylor of Old Bond Street slick. The heavy, sweet lemon of the soap gave way to the very citrusy accord that is Clamorgan perfectly, which adds some sour orange in the top notes. Once all the citrusy business is concluded, the manly, yes, "barbershop" like scent of oakmoss, patchouli and musk remained. Though I'd have to say it doesn't quite exemplify the category, as it's missing the aforementioned powdery notes, it pulls it off nicely. Both products smell outstanding!