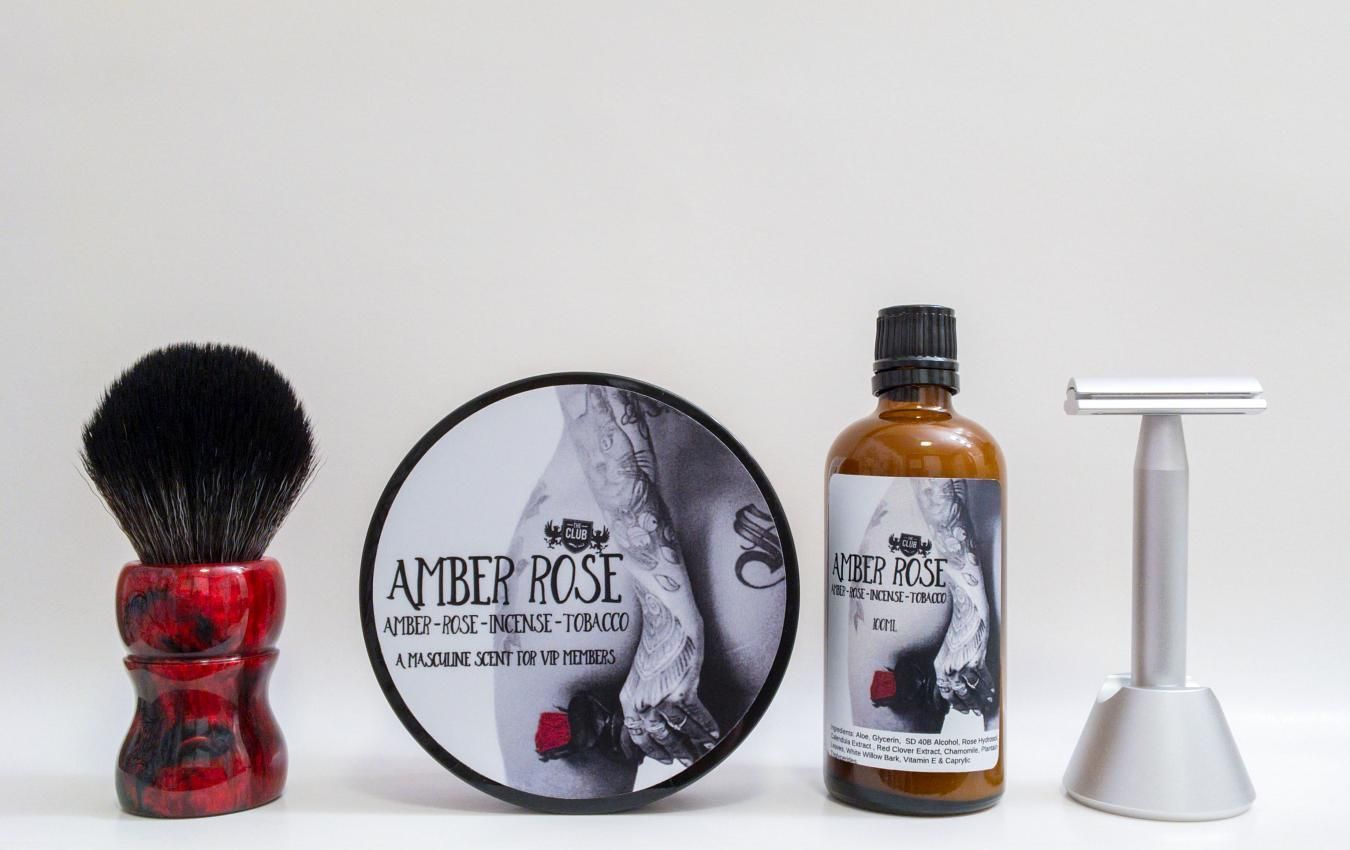 Introduced at the recent Ariana & Evans release party, members of The Club can look forward to Amber Rose in a #soap and #aftershave being rolled out soon!

Today's product is technically a product of The Club rather than Ariana & Evans. However, I'll kind of lump it in just the same (especially since the soap and aftershave bases are identical). For a background on #ArianaEvans check out the appropriately named article; What is Ariana & Evans? Unlike the more upscale Ariana & Evans offerings, this one is more Keith Richards than trendy and elegant and more inline with The Shaving Shop and The Club products, as expected. Think of the latter as a club within the former (and thus the "VIP members" blurb). Also, note that the aftershave label is a pre-production version.

As mentioned, this combo was one of several released at the recent launch party on August 25, 2018 - hosted in a New York City loft for new Ariana & Evans products. One I already covered, which was The Loft and I planned on writing up a review of this one, Amber Rose last week but I was on vacation and didn't get to it, or the reviews of Frozen Mojitos and Choco Cubano which will be forthcoming shortly. There's also Which One's Pink? (a Pink Floyd tribute) that I'll be reviewing shortly as well, but it's still in development with some potentially exciting tweaks. Stay tuned for all this goodness right here!

Amber Rose has notes of amber, rose, incense and tobacco. On open you get the unmistakable rose; floral and from the flower; not green or inclusive of the stem and overall not too sweet. The amber creeps in near the back half and into the middle with its warm, resinous vibe - pairing perfectly with the note of incense. The tobacco note dances about before it eventually trades places with the former two - really coming into its own as the base. Scent strength is a medium with a longevity of 4 hours. The rose is just the right touch to keep the otherwise masculine scent from being overwhelming; but fear not, it's a fleeting presence.

Hardware today consisted of a silver #StandardRazors with a #PolSilver blade on shave five. The brush is a lovely one from #LowbornSupply called Drac sporting a 24mm BOSS knot. The #GTP scuttle naturally kept the suds in line and warm throughout.

Another pleasant shave with a The Club product in the Ariana & Evans soap and aftershave bases. The scent is as billed; masculine but with a touch of floral rose to keep it from being too much so. It smells lovely, but with a fast transition through the tiers and shorter longevity. It dries down to a simple, mostly amber-tobacco base. Amber Rose is a really nice scent, especially as shave software and would make great base products for a fine tobacco-based fragrance to follow for the day. Good stuff!