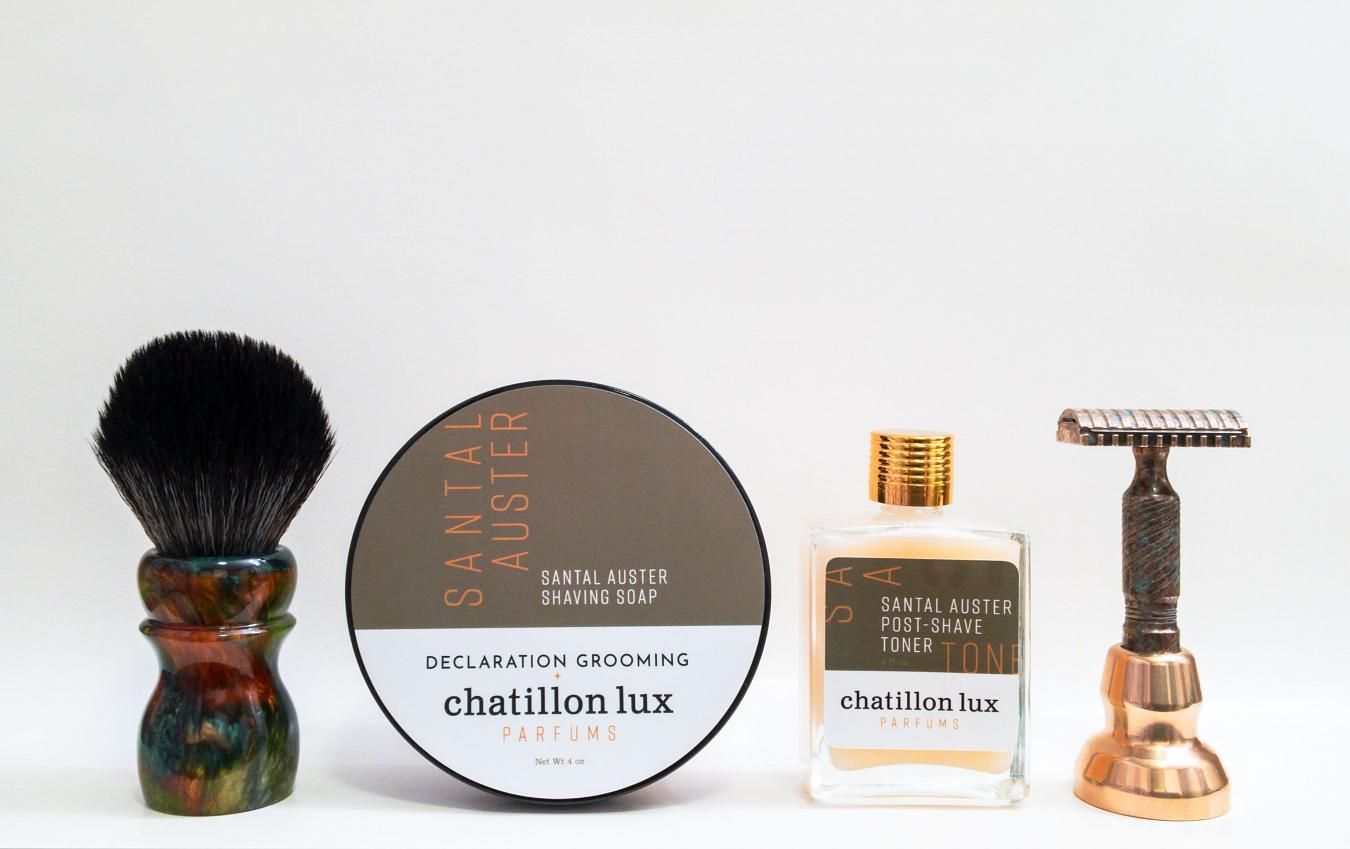 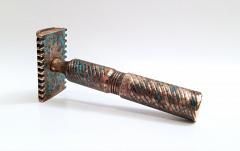 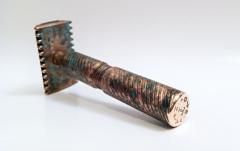 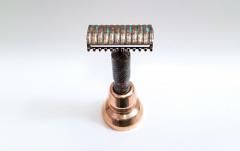 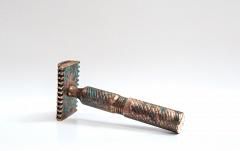 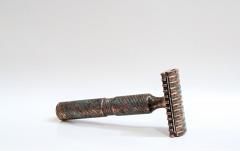 A thoroughly verdigrised bronze Timeless Razor and a collaboration between Chatillon Lux and Declaration Grooming called Santal Auster in an #aftershave (toner) - and #soap - combo!

Santal Auster is a sandalwood accord that replicates the timeless scent of Mysore sandalwood. The distinctively rich creaminess of the scent is enhanced by real sandalwood essential oil that is sustainably grown and harvested and is supplemented by a powdery undertone that evokes an incense used in a timeless ritual. Bold yet understated, Santal Auster is a refined scent perfectly suited for special occasions.

I've reviewed a lot of both #chatillonlux and #declarationgrooming (formerly #landlgrooming) here (click on any of those hashtags to see them all). What's new with today's offering is the matching soap in the special Icarus base and the scent itself of Santal Auster which is a bit different from the previous release on May 20, 2017. That release only offered an aftershave, toner and salve. Today's combo came from the release on March 14, 2018. Needless to say, everything sold out in no time flat, and was followed up by a second, more limited and last release a week later. That too sold out completely. This is actually my second shave with this setup.

As mentioned, this year's release is a bit different from last year's in packaging - and scent. I've reviewed Santal Auster in-depth when it came out (which of course, didn't come with a soap as this year's has). The packaging for both the soap and aftershave products is all-new, and quite frankly - amazing. Absolutely top-notch, professional looking branding and packaging. The toner even came in a customized cardboard box to dress it up some. So let's talk briefly about the scent difference.

Last year's Santal Auster was made with a custom sandalwood accord; nothing more, nothing less. It was smooth and creamy and unfortunately, fairly light in strength. That last part was a strong consideration for this year's release; making it stronger. It was successful, but I have to say, it's not that much stronger nor longer lasting than last year's. This year's is bolstered with Mysore sandalwood essential oil; the net result is that it's a bit spicier, less smooth. There's a lengthy blog post from Chatillon Lux called Scent Notes: Inside the Making of Santal Auster Parfum Extrait that explains it in more detail, albeit the parfum extrait - which is decidedly different and more complex than the aftershave provisions. The important bits are:

When I originally created Santal Auster in last year’s aftershave release, I was looking for a particular type of powdery, light sandalwood scents that would linger closely to the skin and also blend well with other scents. So much so that it spawned Rose Santal, our most popular scent. But in the year since it was originally released, I’ve thought quite a bit about how it would be best represented as a fragrance while also developing how to improve the aftershave scent while staying true to the original...

...Additionally, I have slightly updated the aftershave/toner/salve version of the scent, as well, to add for longevity and projection with some fixatives and the same sandalwood essential oil used in the Parfum Extrait.

That brings us to the soap, which is new - but the soap is in a new base called Icarus for this release only (so far). I won't get into all the nitty gritty of it, as it's best explained by a lengthy blog post from Declaration Grooming called What Is Project Icarus? But let's boil it down. New ingredients include goat's milk, lamb tallow, colloidal oatmeal, tussah silk and Tetrasodium EDTA. There was also some tweaking over the standard formula including the fact that it's a harder soap now and the avocado and castor oils ratio modified. Finally, there's the price... Setting a new standard for regular artisanal shaving soaps it sold at $31 USD. This was due largely to the cost of the fragrance.

Why all the changes, you might ask. To make an easier to lather soap, more like "traditional offerings" rather than the fairly soft soap they've been known for. This is definitely a harder soap but as a consequence needs additional loading time; nearly double. You'll also want to add quite a bit more water than you're accustomed to - it's a thirsty soap! The other tweaks are more to do with slickness and face feel and on both counts this soap is among the very top. This soap is amazingly slick. It also feels just as amazing post-shave; you could get away without applying anything else.

So what's the catch? Besides the price, there's a known issue of a "gamey smell" from the soap. The advice was to let it air out. Indeed, the fresh tub was plenty ripe and airing it out even for a short while - went a long way to alleviating that. Once lathered, the soap doesn't smell funky at all and the sandalwood comes forward. For the second shave, there was again a bit of a gamey smell in the tub but it was far less than the first time around and of course, once lathered - was again fine. If this bothers you, you'll have to decide. It's because of the goat's milk and lamb tallow. You'll recall last week's review of Mickey Lee Soapworks Drunken Goat that the goat's milk was an issue there, too.

So let's talk about the other elephant in the room... That #TimelessRazor #TRBR78 in bronze (with a fresh #Astra blade) that looks rather funky. If you caught the preview from last week you'll know that I started forcing a patina (and then some!) on the bronze. That process (which is somewhat time consuming) is now complete, and resulted in the darkened patina and bluish-green verdigris. Yes, verdigris is technically toxic, but you'd have to consume quite a large amount of it - it can also cause contact dermatitis (rash) and itching on some folks. Not to worry; I applied two coats of caranuba wax to the finished product and it shaved without issue today. I might also point out that this is copper sulfate (blue) and not copper acetate (green) verdigris, which is different.

The process merely gives a patina; a coating. With a little elbow grease and a product like Nevr-Dull it'll come right off (witness the bottom of the razor handle, which I polished back to a shine to show off the logo). While the surface feels just slightly rough, it shaved perfectly well and wasn't noticeable in the least. At least one person has taken to darkening their razor to near black using straight ammonia fuming. It essentially sped up the normal process bronze goes through, albeit dramatically. I decided I wanted something different, something more... Ancient looking. Success! The #LowbornSupply brush with a 24mm BOSS knot and #GTP scuttle rounded out the hardware for today.

This is some seriously good software, all around. The Santal Auster scent is lovely but I'm still a bit disappointed in both the strength and longevity. It's also not as creamy as it was last year, rather spicier. As for the soap, aside from a bit of a gamey smell, the performance is outstanding by any measure. The soap does take longer to load and requires more water than most soaps. The price is a bit of a shocker, regardless. The razor performed perfectly, rendering a BBS shave with ease. I definitely recommend Astra blades in it; they take some of the edge off (literally and figuratively) a ruthlessly efficient cleaver.