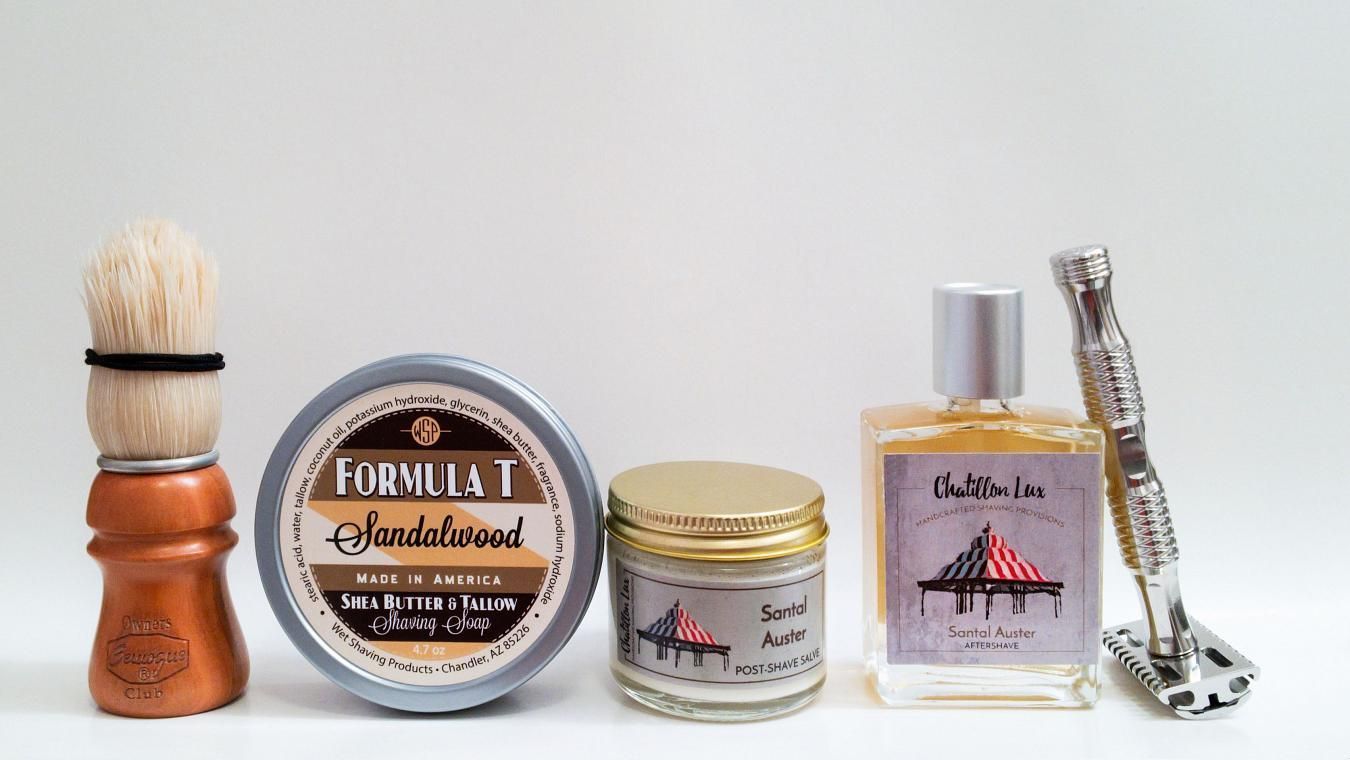 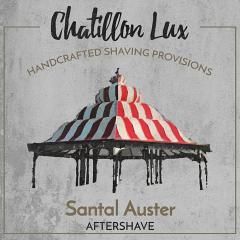 Holy mother of all shaving... Today was a bombastic day in regards to top tier goodies in the den. Featuring Chatillon Lux Santal Auster #balm (salve) and #aftershave along with a Timeless Razor in cold, hard steel on its maiden voyage!

This creamy, sultry sandalwood is an homage to the 19th century Saint Louis men who could afford the luxury of a shave from the highest quality steel in the globe. Shaw’s legacy may be rooted in his history of philanthropy and botany, but his contribution to the fashion and style of Saint Louis is highly underrated.

I won't get into the Wet Shaving Products Sandalwood #soap since I reviewed it extensively already. I used it today as a sandalwood base for one of the real stars in today's shave... Namely, the limited edition release from #ChatillonLux called Santal Auster in both salve (balm) and aftershave form. It's a single note; sandalwood. While this seems to fly in the face of every other Chatillon Lux offering, it's no ordinary sandalwood. It was created in-house by Shawn, after he couldn't find a sandalwood accord that he really liked. As I've mentioned here as well - most tend to be a bit odd, cheap or artificial; especially in mass-produced offerings. I can tell you that Santal Auster is for the real sandalwood connoisseurs out there. It smells very natural and woodsy, refined and smooth. It smells like sandalwood should (and then some). The scent strength is a medium but longevity is above average at 6+ hours. The best part is that it will be featured in future releases, such as the upcoming Rose Santal release. It's a great pairing with the WSP soap, which is also of an excellent quality and highly recommended.

And now for a brief (and exclusive) interlude, courtesy of the man himself for this review...

When I began making fragrances, I spent a ton of time just mixing stuff and learning how different elements interacted at different ratios. I slowly learned about how fragrances were constructed on the micro scale and the macro scale. As I grew as a perfumer, I found myself searching for certain scents that did not exist. So last year I decided that my education began for real. I began learning about scents at the extremely micro-level: how different molecules affect different scent notes and how to create an accord from scratch. As I began to feel comfortable in this new realm, in which it almost felt like starting over, I set my sights on creating my own vision for a sandalwood scent. I had found sandalwood accords that were close, but not quite there. So I built one from scratch for my own use in fragrances and finally nailed exactly what I had dreamed of. I was so proud of this scent that I decided to release it on its own, as a celebration of a milestone of my personal development. The name Santal Auster is a reflection of the sandalwood accord developed in South Saint Louis. It is a culmination of countless hours of research and development and a declaration of a new era for Chatillon Lux, released on the precipice of our second anniversary.

So yeah, it smells awesome. How's the performance? Typical Chatillon Lux if you're familiar with the brand... Both the salve and aftershave perform exceedingly well. In fact, today was my first experience with their salve, so I'll talk about that. You can check out my other Chatillon Lux reviews for more on those). Its consistency was most unexpected... It's light, airy and fluffy like a mousse. As with most balms, the key is to use them very sparingly. It's all too easy to overdo it (which can leave your face feeling greasy and/or tacky). I didn't experience either with this salve - just extreme healing and moisturization. Looking at the ingredients, which include glycerin, lanolin, shea butter, avocado oil, coconut oil, witch hazel and aloe vera - it's easy to see why. I actually applied the salve to my face, then the aftershave on top and in other areas (i.e. wrists) for more of the scent for the day. Face feel was exceptional by any measure.

That brings us to the hardware, and the other star of the show today. The maiden voyage of the #TimelessRazor in polished stainless steel, with a .95 blade gap on a custom base, featuring an open comb on one side and scalloped, solid bar on the other - with a smooth cap up top (a scalloped top cap is enroute). Everything you've heard about the Timeless Razor is true - and it's a work of art to boot. I plan to do a seriously extensive review of it soon, once all the parts are in and I've had a chance to shave with all the combos... So I won't talk about it too much today except some notes. First off, it's highly efficient ("aggressive") yet it doesn't feel that way! No, it's utterly smooth on the face and in fact, using the open comb side feels just as comfortable as the solid bar (more on this in the upcoming review). Thanks to the tight tolerances, absolute rigidity of the entire unit (including the blade) and excellent design, this beast whacked off every last hint of whisker. Even under my nose and chin, where mild razors often leave at least some stubble... Was gone without a trace. While that's not uncommon when I use more efficient razors, none do so as easily as the Timeless Razor in this regard. Absolutely effortless BBS shave. This baby instantly made me rethink my choice for top razor.

Man, what a great shave day. Both software and hardware went beyond expectations today. I can highly recommend every product in the photo above without reservation. Stay tuned in the coming days for more on the Timeless Razor ending in the penultimate review once I've got some mileage out of 'er... I've got a .68 gap smooth straight bar base and scalloped top cap to mix and match yet. As for Chatillon Lux I strongly suggest you check out their most recent and upcoming ([1] [2] [3]) releases. Man, it's a good time to be alive - and shaving!