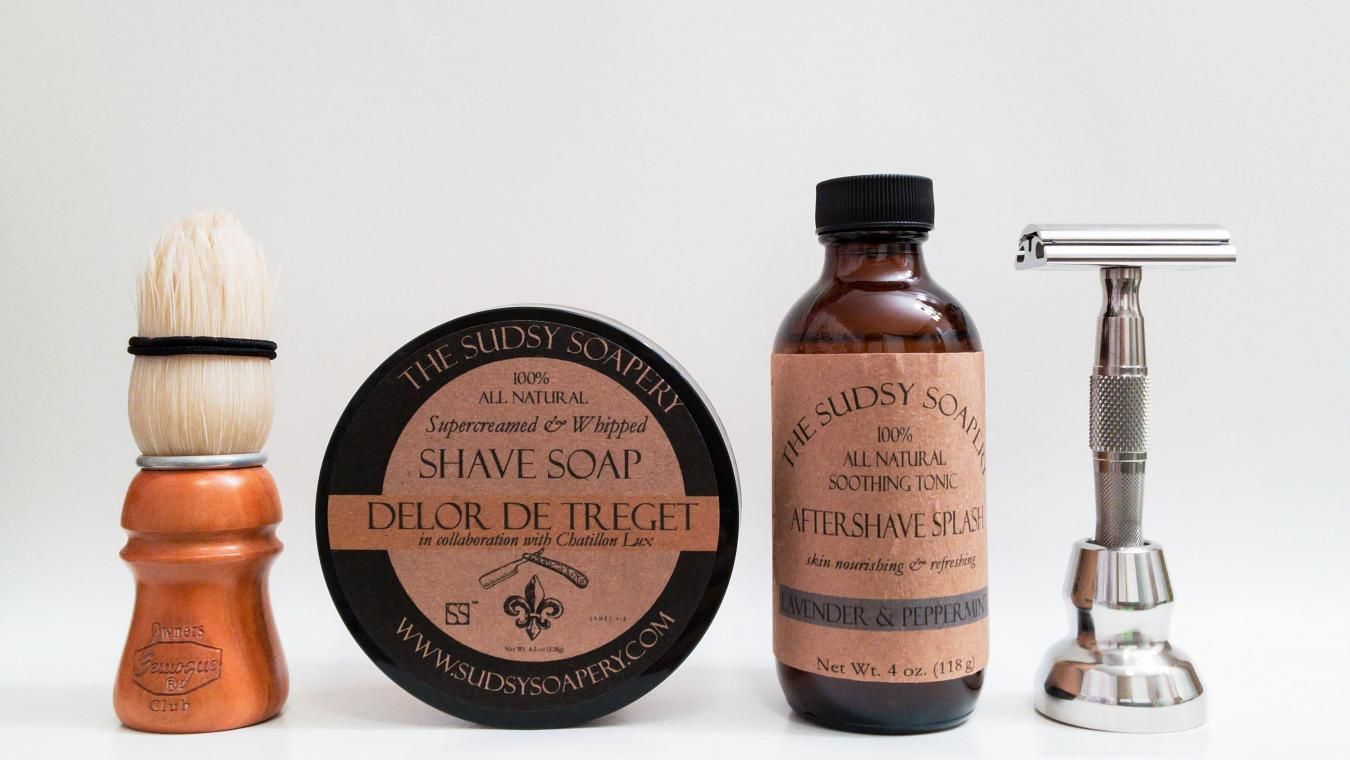 A collaboration between Chatillon Lux and The Sudsy Soapery begat this #soap to go with the (original) #aftershave provisions in the Delor de Treget scent - which was made exclusively for the St. Louis meetup. Besides what was available there, only 40 additional tubs exist (and they're all gone).

The original scent from Chatillon Lux was inspired by Carondelet's original resident and founder, Clement Delor de Treget. As a French Spaniard who was the highest authority in a lowly trading town, Delor de Treget represents the humble magnificence of Saint Louis.

This scent is more rugged than masculine, suitable for anyone preparing for a long day collecting pelts, pushing pencils, or anything in between.

Until now, the scents tended to be rather one- or two-dimensional, often carrying only a couple of notes... Just look at the accurate and apropos product names. This most recent offering, a soap made for the St. Louis meetup and a collaboration with Chatillon Lux - is called Delor de Treget. It features notes of bergamot and cedarwood, rounded out by orange and lavender with a base of labdanum.

I don't have the matching aftershave (yet) so I'll judge the soap scent here, but the aftershave (pictured) in the chart above. The scent strength is on the lighter side of medium. I get a nice citrusy accord overall, with the bergamot and orange interacting with the cedar and lavender towards the middle. The base is more pronounced in soaps as it all blends together a bit, and the labdanum provides a musky, animalic sort of amber vibe. It's a nice scent overall; light and great for the spring and summer. I'll get a better feel for it once I get a hold of the aftershave.

For this one-off run, this soap was enhanced over the usual formula to include yellow shea butter and skin enhancing "multi mitti" (actually multani mitti, a.k.a. fuller’s earth clay) and French yellow clay. The latter two are essentially kaolinite and bentonite clays (respectively), with various skin-related properties but also provide a bit more slip. They can be a touch drying, so the added shea butter should offset that.

I've mentioned in the past that the soap produces a plentiful amount of semi-fluffy/creamy lather with good cushion and glide. I get a good primary - but still slightly lacking secondary lubricity, as with past formulations... But I think this version of the formula does improve on both the lather density and residual slickness. Either way, it performs quite well, especially in face feel - this is a very nice soap. And you get an above average amount of 5.5oz. As mentioned in the opening, unless you have a tub already, it qualifies as unobtainium at this point, aside from third-party forum classifieds, second-hand.

Hardware consisted of the #TimelessRazor in the "mild edition" with a #Stork handle and and a fresh #Feather blade, while the #SOC brush made quick work of loading up the soap and lathering it in the #GTP scuttle. I've actually been traveling for the past (nearly a) week, and have used this razor with this blade exclusively, and it has just been amazing. I don't see myself returning to most of my other milder razors any time soon. This razor is just as mild yet much more efficient.

A nice shave, and with a scent that's decidedly more complex than typical offerings from The Sudsy Soapery with an enhanced soap base. An improvement all around, further refining the nice face feel that these soaps offer! Now that I have a tub of Delor de Treget soap, the aftershave from #ChatillonLux is en route, so I'll revisit in the near future. Thumbs up on this software!