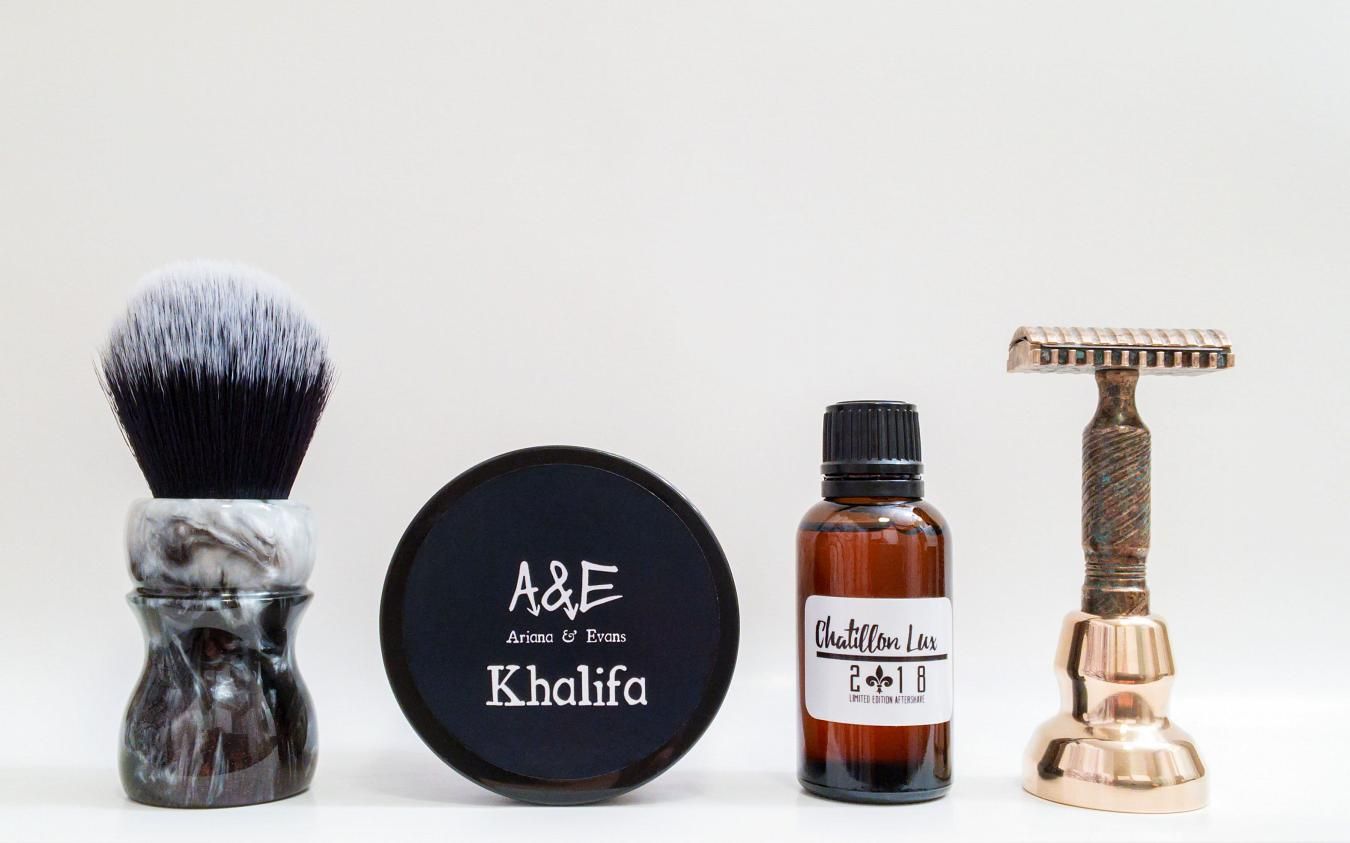 Khalifa has one of the most unique, complex and exotic scents I ever smelled. Khalifa is a mix of mysterious 'resins', t*bacco, vanilla, oud, coffee and incense. It's a dark, mysterious, smoky, woody mix that is reminiscent of a fine niche fragrance. This luxury shaving soap is now made in our tallow based, goats milk and lanolin soap. You'll find this soap to be among superb with it's slickness, as well as post shave feel. This soap will be elegantly presented within a 4 OZ jar, then inserted within special black glass exotic urn.

These two products don't share the same scent nor are they even closely related. Since I didn't have the aftershave for Khalifa nor the soap for this one-off "Maggard Aftershave" (since it doesn't even exist - sort of), and considering the double B&W theme... I decided to roll these two products into one review. #ArianaEvans makes Khalifa and #ChatillonLux made the "Maggard Aftershave." The former is a current product, while the latter (as mentioned) was a one-off. It can be revealed that the latter is actually a "silver cap" version of an existing product; Delor de Treget which I extensively reviewed previously. A brief recap; what's a "silver cap" version? A scent that differs from the shaving provisions (e.g. aftershave, toner or salve).

Some brief info on the packaging. I have the regular version Khalifa soap with the glass urn. The tub, while containing the usual 4oz. of soap, is a much smaller diameter tub that's taller to compensate... To fit within the glass urn. I didn't use it, as it's fairly large and the soap sits in a bit deep - making loading (and consequent post-shave clean up) bothersome. That and the fact that it doesn't sit on my shelf or fit within the regular photo constraints. That said, it's nice enough; with a semi-gloss, glazed finish but honestly, I'd rather see a normal tub. The "Maggard Aftershave" on the other hand, is in a simple, small bottle not unlike Barrister and Mann Awesome aftershave, if you're familiar.

For a background on Ariana & Evans check out the appropriately named article; What is Ariana & Evans? Khalifa is a pretty complete product line, including this soap ($32.00; $28.80 on sale currently), an aftershave ($22.50) and an Eau de Parfum ($38.45). That's $89.75 all-in, which is a bit on the high side at first blush. Taken in perspective, the soap has the nice glass urn, so that's fairly on target. The EdP is cheaper than most other artisans (which go for $40-90) so that's a win. Finally the aftershave, which I feel is a bit pricey given the ingredients.

Let's provide some scent notes for these products. First, for Khalifa which has notes of resins, tobacco, vanilla, oud, coffee and incense. The standard Delor de Treget has notes of bergamot, cedarwood, orange, lavender and labdanum. As for the Maggard Razors meet-up aftershave, nay, Delor de Treget on steroids - I'll let Shawn describe it best:

I added some fresh notes to give the citrus some more brightness, rose, and a great lily of the valley that I think is what really gives it the freshness. Additionally, I added oakmoss on the bottom end to make it a true chypre and to balance out some of the top notes I was adding, as well as some vetiver.

Khalifa smells as you might imagine; resins and incense with further warmth added by the tobacco and added creaminess from the vanilla, a subtle hit of coffee and a bit of twang from the oud. It's darker, more for cooler weather or at least evenings and smells very nice... But it might not be everyone's cup of tea. I can't say too much more about the scent, as I only have the soap - and it's hard to get the full picture with that alone.

The Delor de Treget "beta EdT" (a.k.a. "Maggard Aftershave") is lovely, and definitely a big enhancement over the simpler original. It's much more complex, and seriously boosts the initial citrus hit. There's also a more fully developed floral middle and greener base. It's truly a lovely scent and I look forward to its official release. It's an aftershave and not a true EdT so the scent strength, while robust - lacked the true punch and longevity of the latter. Longevity was only a few hours.

Performance of both products are as expected. However, the soap took a hit over the identically formulated L'Orange Verte and Asian Plum soaps, which both scored perfectly. How can that be? I attribute it to two things. First, the container size is quite small; in fact, barely larger than a 24mm knot just very slightly splayed. It's hard to get a solid load out of such a small container except by say, doubling your usual loading time (which I did not do). Second, this particular brush has a lower loft and therefore "small" knot - not one of my better loading brushes. I got a low density, somewhat unstable lather where I should have gotten what I previously described as: "The lather is thick and creamy, with very good primary and secondary slickness - and resulted in very good face feel."

The aftershave on the other hand, performed outstandingly. Really, really good face feel... Which I didn't quite expect as I usually use the aftershave toner; it has neither the alcohol nor the menthol of the aftershaves. It doesn't quite have the actual moisturization of the toner, but without looking at the ingredients you might not realize that. Because of the alcohol, it has a bit of a sting, as expected. The menthol also stood out, but I'm a fan and definitely appreciated it.

Hardware for today included the #TimelessRazor #TRBR78 open comb bronze razor with an #Astra blade on shave two. With about four days of growth to mow down, it simply didn't stand a chance. For some reason, perhaps the lather, it was a bit rough today... But there's absolutely no question about the results. Easily among the best of BBS shaves. The aforementioned brush is a piece by #LowbornSupply sporting a 24mm Tuxedo knot. Finally, the #GTP scuttle did its thing.

I was pleasantly surprised by both products, which performed exceptionally (the lather quirk notwithstanding). I definitely enjoyed both scents, despite being radically different from each other. Then there's the quality of the shave, with the razor delivering, full bore BBS. Nice start to a Monday, no?

gotta admit, my New Forest Tubby 1 Finest had no problems lathering this... great soap, great scent, and it will not be my last A&E soap, that's for sure.. :-)

I was pleasantly surprised by the latest formula and scents. 👍