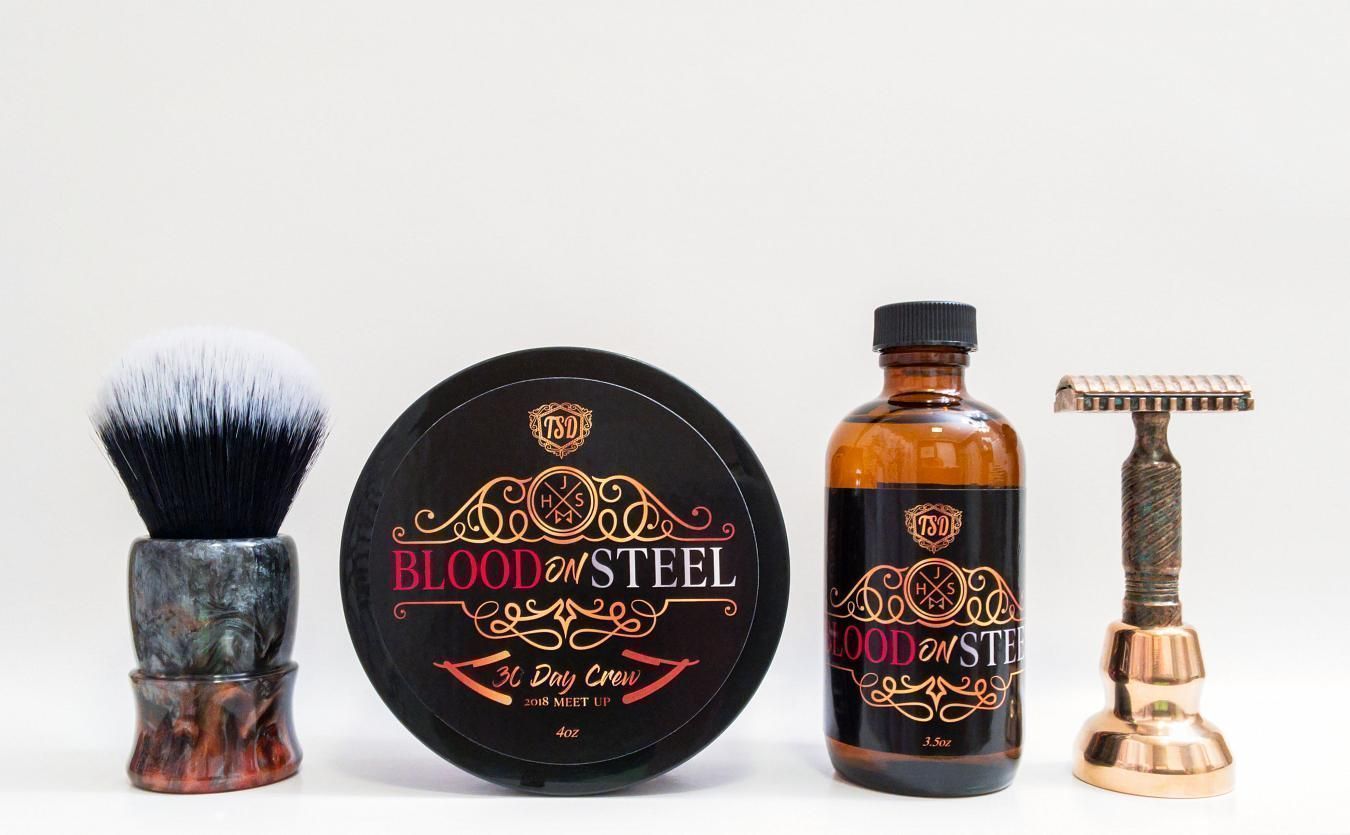 Finally getting around to a Special Edition Jeeves of Hudson Street #soap and #aftershave called Blood on Steel!

I've reviewed, one by one, the entire Jeeves of Hudson Street lineup in the past. In case you missed the earlier review of Zulu Foxtrot Golf (military parlance for "ZFG" or "Zero Fucks Given") check that out... It's the most in-depth review and indicative of the bases, packaging, etc. I mention that review because it talks about the soap and aftershave performance (which I won't but paraphrase below).

The aftershave, like the soap, also has a deceptively simple ingredient list. Also like the soap, it performed really well. Not so much alcohol where it just burns, as it's balanced well by the witch hazel. Similarly, the menthol isn't too potent where it overpowers the fragrance... Too many aftershaves have this issue. Finally, there's the glycerin which leaves a silky soft face feel without being tacky. Each ingredient is in just the right proportion. The scent strength is a medium, and the longevity a good 4+ hours.

So what's Blood on Steel about? It was the official St. Louis meetup (and The Shave Den forum) soap, taking place on Saturday, July 14, 2018. The scent is a dupe of Parfums de Marley Herod - essentially an Oriental fragrance of wood and spices. The scent was launched in 2012 and the nose behind it is Olivier Pescheux. He's made a remarkable number of scents. While they weren't all rockstars, there are definitely some heavy hitters on the list.

So how's the scent? Blood on Steel has top notes of pepper and cinnamon; middle notes of labdanum, incense, tobacco leaf and osmanthus and base notes of musk, Iso E Super, vetiver, cedar, vanilla and nagarmotha. I didn't get nearly enough time with the fragrance this morning to properly assess it. I can say that it smells wonderful. The hallmarks of an Oriental are there; wood, spices, a hint of floral with warming vanilla and musk and a healthy kicker of incense. It's a manly scent overall, with soft edges.

Scent strength of the soap, both out of the tub and lathered is a medium, as is the aftershave. Projection and sillage are similar. Longevity is decent at an easy 4-5+ hours. If you like incense infused scents - check out similar scents such as Chatillon Lux La Quatrieme Ville, Barrister and Mann Le Grand Chypre, Ariana & Evans Khalifa and of course, the mother of all incense fragrances, Declaration Grooming Harmony. Of course, there are others.

Hardware for today included the #TimelessRazor #TRBR78 with a fresh #Astra blade. It's been a while since I fired up this maneater... A lovely, near-BBS shave was had. The brush is from #LowbornSupply in his classic "ember" style resin; in fact it's called Ember in a "chubby" handle style. It's packed with a 24mm Tuxedo knot, which works perfect with the white/black portion of the resin. Bringing up the rear is my trusty #GTP scuttle.

It took me a little while to get around to this soap; not sure why... Just a never-ending stream of good stuff coming to the den I suppose. A shame, as I love incense infused fragrances quite a bit. Performance was a given of course, knowing #JeevesSoaps... Who remains a largely underrated artisan.