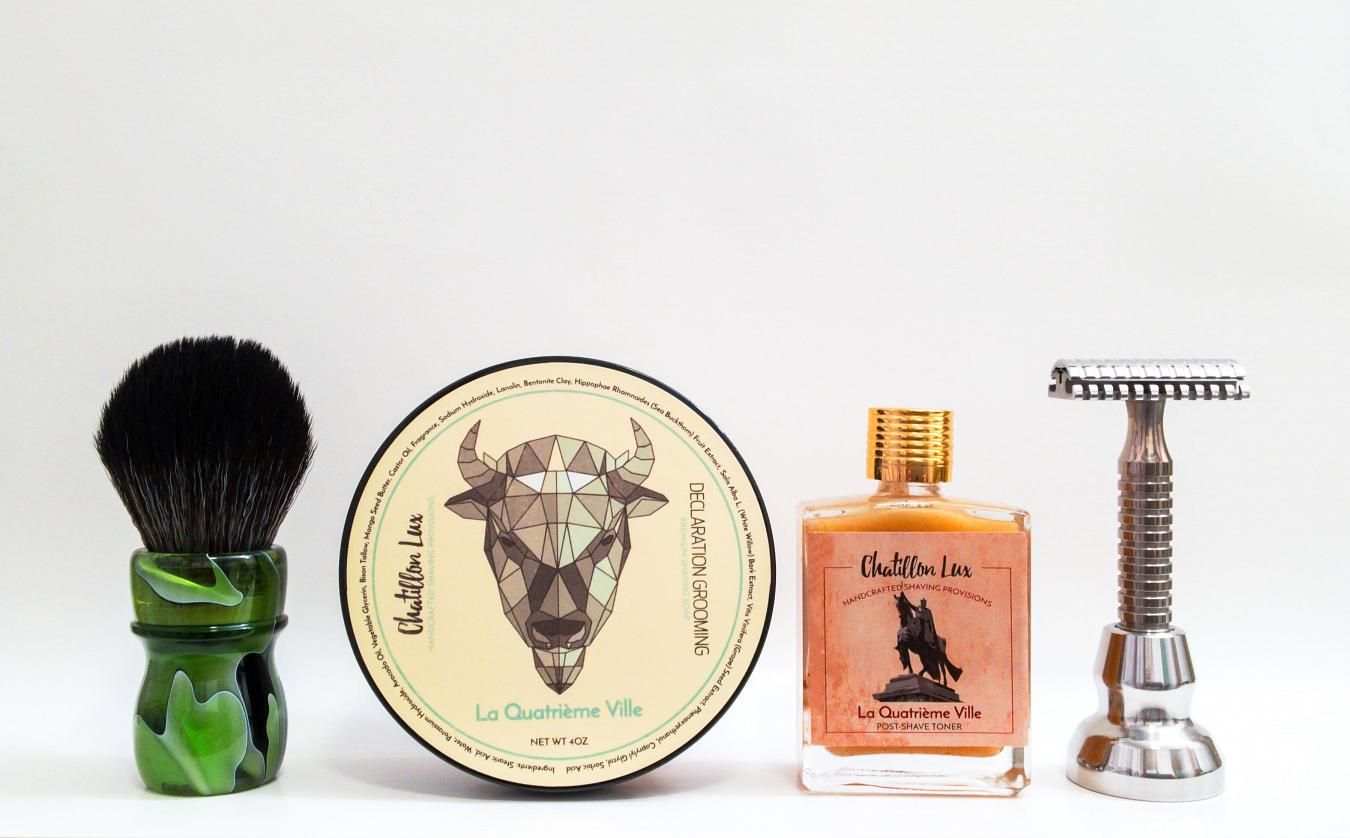 At the advent of the 20th century, Saint Louis was known as the Fourth City. As they prepared to host the 1904 World's Fair, an explosion of arts, culture and commerce took place. Coincidentally, in what was to become Forest Park and Washington University in St. Louis, the Summer Olympics took place that year, as well.

The smell of La Quatrième Ville seeks to recapture that time of refined character and ambitiousness. A refined, masculine smell brings back the bustle of Forest Park during the World's Fair: the woods, attractions and waterfronts are reflected in the vetiver, cypress, incense, nagarmotha, violet leaf, benzoin, and cardamom.

I've reviewed a lot of both #chatillonlux and #declarationgrooming (formerly #landlgrooming) here (click on any of those hashtags to see them all) so I won't get into the soap or aftershave performance here. Suffice to say, you can't go wrong with any of these products as they're all top tier and perform appropriately. So let's talk about the scent. La Quatrieme Ville has been around for a while in various offerings by Chatillon Lux but it wasn't until the January 15, 2018 release that Declaration Grooming provided the much anticipated "missing" soap!

The scent of La Quatrieme Ville officially has notes of vetiver, cypress, incense, nagarmotha, violet leaf, benzoin and cardamom. Nagarmotha is actually the Hindi name of cypriol or nutgrass. It has a rich, persistent, woody, earthy, deep, and somewhat peppery aroma with smoky notes of leather, displays great tenacity, and boasts rich, sweet-woody undertones. Basically along the lines of say, nag champa in that it has a sort of "incense aroma" and is potent. Curious that "incense" is a separately listed note, so it would seem the two boost each other. In any event; it's the two of these that are most prevalent in the accord and what really sticks around. The vetiver and cypress both combine perfectly and add a little depth - the former is earthy and woodsy while the latter is fresh and herbaceous. The violet leaf adds just a hint of floral to pull the accord back from getting too dark; the cardamom helps as well with a slightly spicy note. Finally, the benzoin warms things up a bit with a vanillic undertone.

It's basically a robust, incense-forward yet refined accord with a nice depth. It's not a simple or overpowering hit of incense or patchouli, as you might commonly associate with such a description. Sillage going on is on the lighter side of strong but mellows out to a medium after a couple of hours. Longevity is impressive (and not altogether surprising) at a solid 8+ hours. It's along the lines of Tallow + Steel Shag (limited edition and discontinued) or L&L Grooming Harmony (discontinued).

The razor for today was the #TimelessRazor "aggressive edition" featuring a .95 blade gap on a custom open/scalloped comb base plate with a titanium RazoRock Halo handle and #PolSilver blade on shave five. The brush is a lovely #WildWestBrushworks piece with an exotic, deep and three-dimensional resin sporting a 24mm BOSS knot. The #GTP scuttle did what it does, as always.

Awesome shave with a deep, rich, intoxicating scent. It's so much more than incense or patchouli (the latter which it does not include) but it along the same lines. Pungent, earthy, warm - and fabulous. I can easily see myself using this one often.