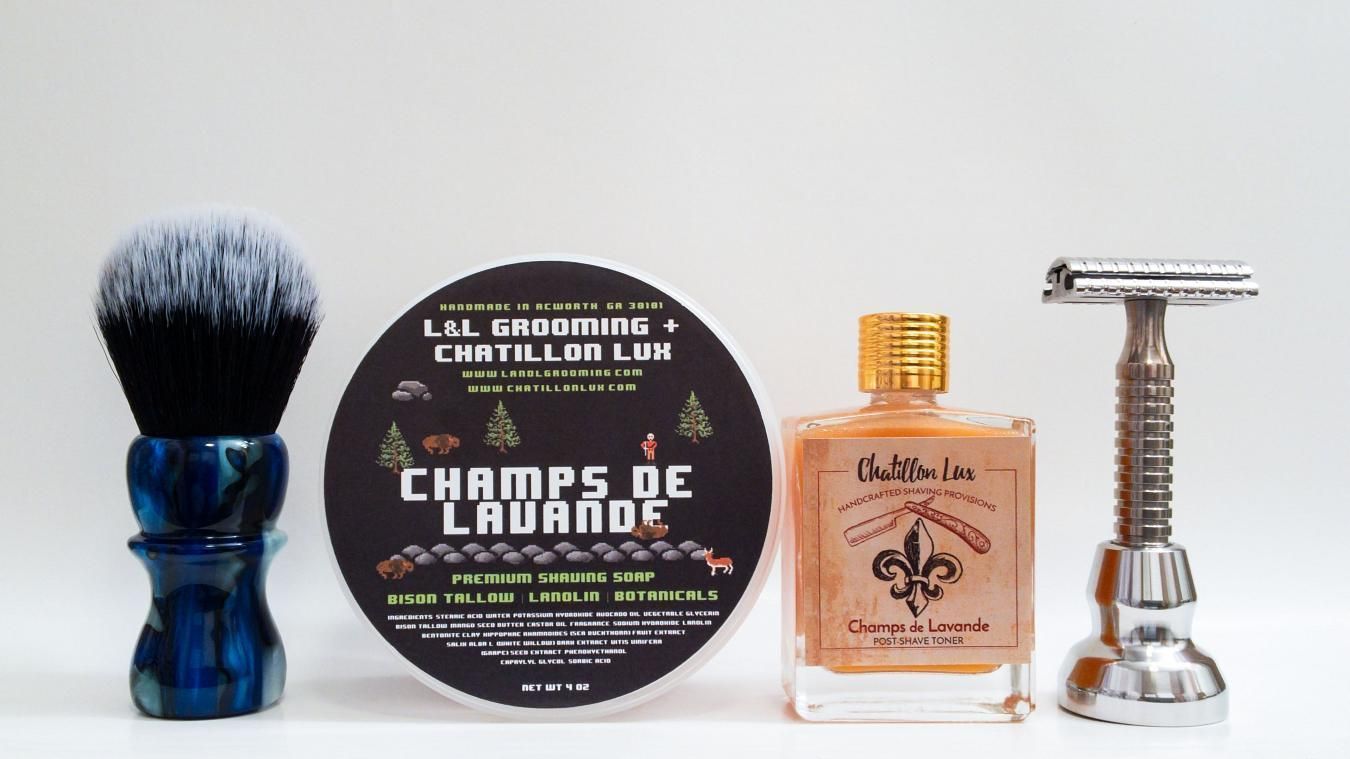 Another collaboration between Chatillon Lux and L&L Grooming - producing a blissful lavender accord called Champs de Lavande in a #soap and #aftershave combo, here in its second release.

This limited edition collaboration between L&L Grooming and Chatillon Lux is the embodiment of a Midwestern prairie in an early summer midafternoon on the Oregon Trail. After reading about the adventures of Henri Chatillon in the memoir, The Oregon Trail, Herman Melville called Chatillon the most gallant man to ever kill a bison. And it is the bison tallow that helps give the L&L Grooming shaving soap its superior slickness and protection...

I've reviewed a lot of both #landlgrooming and #chatillonlux here (click on either hashtag to see them all) so I won't get into the soap, aftershave or balm performance here. Suffice to say, you can't go wrong with any of these products as they're all top tier and perform appropriately. The cost is a little above average on the soap and average on the aftershave/toner/salve. Regardless, each is worth every penny. So let's focus on the scent used in this collaboration between the two artisans.

I kicked myself when I missed the first issue of Champs de Lavande as I waffled too much - and then it was gone. So I was pretty happy when they re-released it on September 12, 2017. I made sure to grab the soap and aftershave toner this time around. One difference is the artwork on the soap tub; it's much more old school, recalling the classic game called Oregon Trail by MECC. It's rather fitting, considering the backstory above.

Champs de Lavande officially has notes of (two types of) lavender, ylang ylang, eucalyptus, rosemary, bergamot and black pepper. To my nose, it's definitely a lavender forward scent overall. Subtle and not "too floral" it is tempered by the other, slightly herbaceous notes with a bit of sharpness courtesy of the bitter bergamot citrus and spicy black pepper. This is different from a lot of other lavender treatments, which focus more on the greens like Barrister and Mann Lavender or are just an all-out blast of lavenders (in this case four) like Mickey Lee Soapworks Jefferson Square. It's also more complex than a singular lavender as is the case with Wet Shaving Products True Lavender. It's worth having for the lavender fans, but not too dissimilar from L'Occitane en Provence Eau de L'Occitan line of products; trading the spicy warmth it adds in favor of the herbaceous undertones.

All that said, the scent strength on both the soap and aftershave toner are on the lighter side of medium with an equally short longevity. I'm a bit disappointed at that, as it's a nice scent. I'd definitely layer these products with another scent if headed out for the day. You'll only get a couple of hours or so, otherwise. A good pairing might be Chatillon Lux Lavande Poivre EdT or the aforementioned L'Occitane en Provence Eau de L'Occitan.

Hardware was the #TimelessRazor "aggressive edition" with a titanium RazoRock Halo handle and a #PolSilver blade on shave four. I was looking for a closer shave today (and got it). The #WildWestBrushworks brush made quick work of lathering up the soft soap in the #GTP scuttle, where it just blossomed nicely.

A lovely shave today with all-around fantastic products. I much enjoyed the scent of Champs de Lavande but I was disappointed a little by the scent strength and longevity. It's great if you like lavender - but aren't necessarily a real lavender fan (as I am). It's subtle and will stay out of the way for layering another scent on top if you want to keep your lavender fix on the D.L.