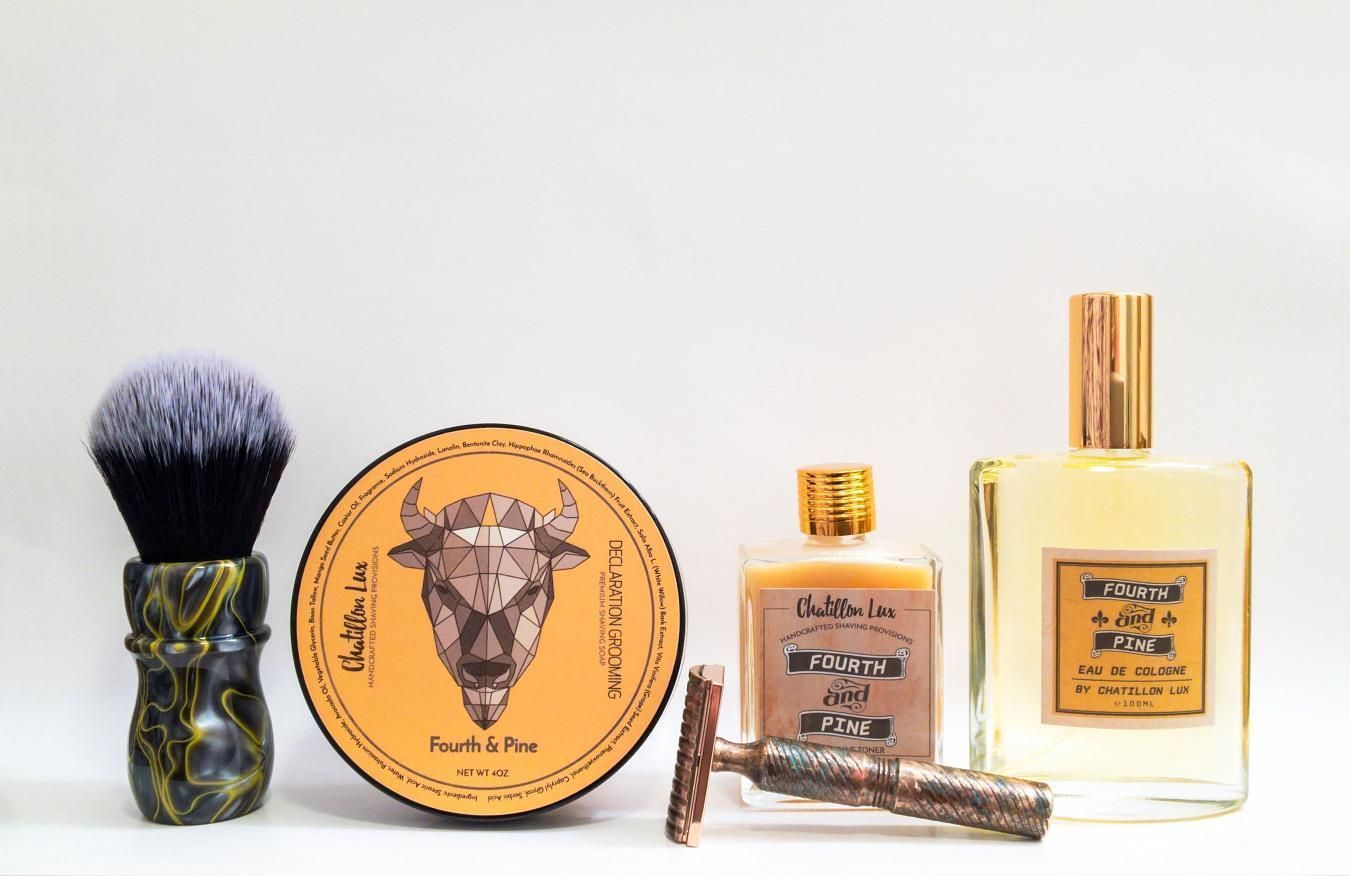 CL and DG "Fourth and Pine"

The hits keep coming - between Chatillon Lux and Declaration Grooming called Fourth and Pine in a #soap and #aftershave (toner) combo that pays true homage to some classics!

Johann Farina is widely regarded as one of the patriarchs of the fragrance world. His classic combination, the original eau de cologne, is still as relevant today as it was over three centuries ago. One of the first American destinations to carry it was Clamorgan's, a premier bathhouse and gentlemen's grooming salon that attended to local luminaries like Ulysses S. Grant.

The Clamorgan brothers were the mixed-race sons of Henry Clamorgan, one of the titans in St. Louis' early history. Despite their second-rate status, they provided the highest level of luxury and carried the finest grooming products in their renowned store, including Farina's Eau de Cologne. This scent is not intended to replicate that master's work, but to provide a new take on it. One that pays homage to the Clamorgan's ability to thrive despite the high hurdles put in front of their success.

I've reviewed a lot of both #chatillonlux and #declarationgrooming (formerly #landlgrooming) here (click on any of those hashtags to see them all) so I won't get into the soap or aftershave performance here. Suffice to say, you can't go wrong with any of these products as they're all top tier and perform appropriately. Fourth and Pine has been around for a spell, but went away at the end of summer last year as a seasonal. It's making a triumphant return this year at Chatillon Lux but it wasn't until the recent April 7, 2018 releases that Declaration Grooming provided the much anticipated "missing" soap! A quick note; the name Fourth and Pine is an intersection (much like San Francisco's Haight and Ashbury) and the site of the aforementioned Clamorgan's - and nothing to do with the scent. Interestingly enough, there was a very limited Chatillon Lux Clamorgan release.

Let's talk about the scent of Fourth and Pine. I won't get too heavy into the "what does it smell like" in practice. Most of you are familiar, at least somewhat, with 4711 and it's not that different, and in the same vein... That is, a citrus bomb. The official notes actually differ between the aftershave, toner and salve vs. the eau de cologne (much like the recent Santal Auster release):

Astute noses, people that recognize some of the names mentioned or the notes just listed... Might see a resemblance to another classic besides Farina Eau de Cologne - and that's 4711 Original Eau de Cologne by Mäurer & Wirtz (as of 2006, also of Tabac fame). In fact, there are several heavy hitters in this citrus bomb genre. Let's take a look at all four; the last two in particular served as inspiration for Fourth and Pine - Atelier Cologne Orange Sanguine and Parfums Berdoues 1902 Tonique:

Obviously, each smells somewhat unique, but all share a similar vibe... Citrus, florals, various herbs and/or woods. Unfortunately, they all suffer from the biggest drawback of citrus; its volatility as a scent. That is, it just doesn't have much longevity. This wasn't so much an issue with Farina and 4711 as they were marketed as personal hygiene fragrances - meant to be reapplied over the course of the day. There's a really good explanation of all these subtleties on the Chatillon Lux site in this blog post about Fourth and Pine. This is why it's an eau de cologne strength, and why there's an additional, smaller sprayer (and pipette) shipped with it... So it can be carried with you and reapplied when necessary. Sillage is mild but longevity is actually decent at 5+ hours.

Hardware consisted of the #TimelessRazor #TRBR38 with an #Astra blade on shave four (more on the patina and verdigris). The brush is a neat piece from #WildWestBrushworks called Solar Flare sporting a 26mm Tuxedo knot, in a ribbony resin that's primarily black and silver with a yellow accent. The #GTP scuttle did its thing, yeah, yeah.

I've long been a fan of 4711 since it's such a "German thing" and we always had some in the house in one form - or several. A huge bottle on the counter, sprtizes on the shelf and towelettes when traveling. It was everywhere. I've also been a long time fan of citrus, and that perhaps, at least in part, is why. I love it in all its various forms and combinations, and I have to say Fourth and Pine pays outstanding homage to the masters as intended. It's really got that same vibe (but better longevity). This is the complete software package for fans of these classics!