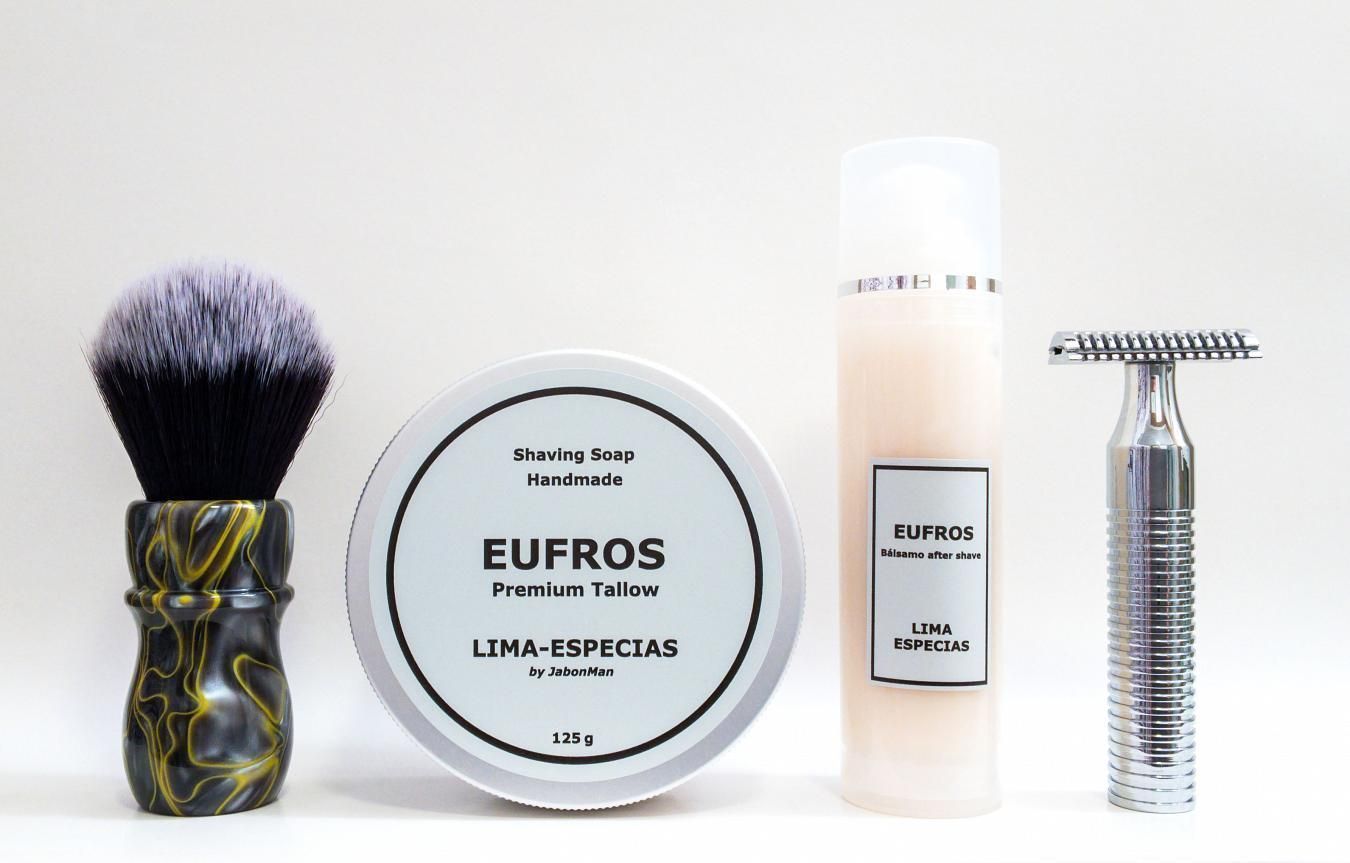 I did an in-depth review of Rosas from the older Regular Line. Today's offering is the latest formula, and considered the Premium Line which I covered in an in-depth review of Dama de Noche. Check those two reviews for tons of backstory and the performance. The software is made by a (very nice) gentleman in Barcelona, Spain by the name of Manuel Garcia (a.k.a. JabonMan on the Spanish forum Foroafeitado). The soaps originally were sold by word of mouth on various forums under this name, in clear PET tubs with a simple label for the name. Later, the packaging improved with aluminum tins and better labels and the brand name became Eufros (which is seen here). In its latest incarnation, the tins and labels have improved further; on par with Wet Shaving Products (albeit in a larger tin) or prior generation Cold River Soap Works. Getting a hold of it is still essentially word of mouth, however. There's no website, no Facebook page - or any other social media for that matter. The only way to reach him is via email. Send him a note and he'll tell you what's available, what the costs are - and then you guys work out an order and payment. Pasteur Pharmacy in NYC usually keeps a decent stock of various scents, in soap and balm as does West Coast Shaving as of April of this year.

Let's talk about the scent of #Eufros Lima-Especias (Lime Spices). This is one of his older scents. Officially, it has lime and "spices." That's certainly accurate, though no details on the spices are given. They are cinnamon, pepper and maybe one, two more spices - possibly a little bay (pimenta racemosa). I need to spend more time with the scent.

Scent strength of the soap is strong; in the tub or lathered. The balm is perhaps a medium to high medium. Sillage isn't very strong and the longevity is about 3-4 hours. What sticks around are the spices; obviously the lime (being a citrus) doesn't stick around too long. Follow this up with something like Ariana & Evans St. Barts (ideally the EdT) a.k.a. Creed Virgin Island Water. Chatillon Lux Fourth & Pine also works, and while it's abundantly citrusy - it leans towards orange forward with a lemon kicker. By extension (and inspiration) 4711 Original Eau de Cologne works as well.

What is lurking beneath the surface is a surprisingly chill (but not over the top) menthol. Between the strong lime and spices, it's not as obvious as other, more chilling soaps. The only one of his soaps/balms to feature it. Clearly it won't compete with the likes of Barrister and Mann Arctique or Chiseled Face Cryogen but it's stronger than say, Mickey Lee Soapworks Paradise Frost and Proraso Menthol (Green).

Hardware choices today fell to a brush from #WildWestBrushworks called Solar Flare which sports a 26mm Tuxedo knot and of course, the #GTP scuttle. What about the razor, you say? Glad you asked...

The #razor is from #Yaqi and called the Tony Godzilla Razor (Chrome version). It's also available in gunmetal for $7 more. I extensively reviewed the Mellon Safety Razor Head in the review prior to this one, so definitely check that out for more information. The difference today (besides the chrome treatment) is that handle... It recalls the beefy UFO handles. But of course, ridiculously cheaper and granted, not of the same caliber... But it's finished pretty nicely considering. Underneath the chrome, it's made of brass so you know it's going to be heavy - especially with dimensions of 100mm x 19mm. How heavy you ask? How about 200g (7oz) heavy - that's nearly a half pound worth of brass!

For this shave I ditched the blade in the matte black head, since it was already on shave four - and threw in a fresh #Feather blade. I also had a weekend's worth of stubble to mow down so that I could see how it does with that. Like the other head, it was insanely smooth helped of course by the yummy #Eufros lather. The handle... I have to be honest, I'm not the biggest fan of heavy and/or long handles - and this one's no different. I prefer them lighter and about 85mm in length. But I had to see what the fuss was about, seeing more than a few fans of these bombastic things. I will say that the weight helped this thing cleave hairs with abandon - which resulted in a shave just short of BBS. While the heavy handle helped in cutting, it hurt in handling; so I suspect a lighter handle will fare better. In terms of efficiency, I'd place similar to a Mühle R89 and less than a Timeless Razor with a .65mm gap and smooth bar/top cap. For a razor that runs just under $28, this is pretty damn good. Of course, with the head being chrome, part of my motivation besides seeing what these monster handles are about, it pairing it with a nice titanium handle (which I'll be doing tomorrow).

What can I say, really? Another fantastic shave with Eufros software! The lather of this soap is just amazing. It's so creamy and plush with excellent pro- and post-shave properties. The balm is no slouch either. Hopefully one day we'll see an EdT line. At any rate, looking forward to see what else Manuel has in store for us! As for the Yaqi razor, the handle wasn't really my cup of tea typically but the razor head continues to impress.