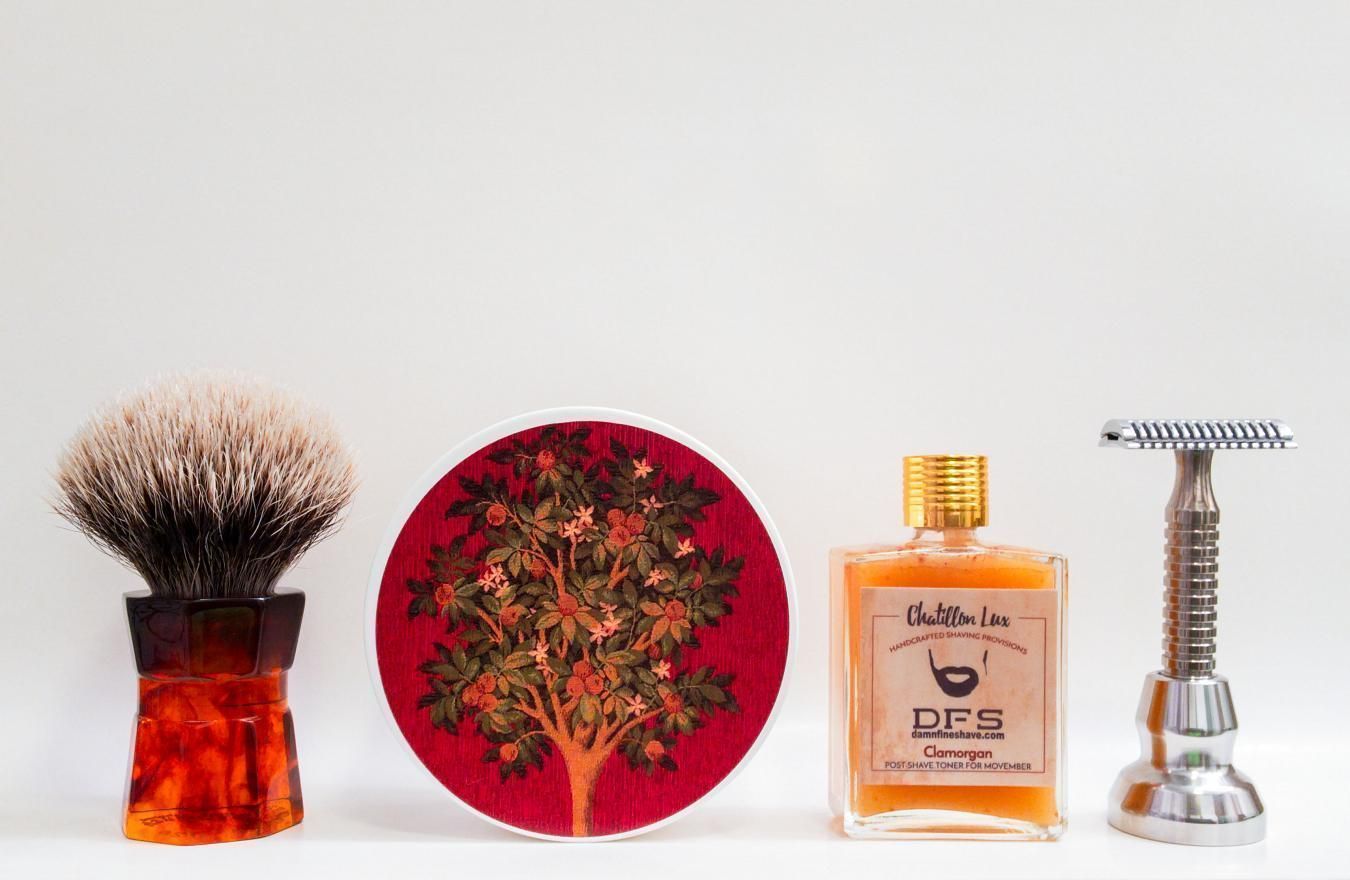 Just a quick note here on the charts above... I rated the #GroomingDept soap under the Value and Lather sections and the #ChatillonLux aftershave under Post-shave and Scent. Also worth mentioning; I've had this soap for quite a while, even shaved with it for a review... But somehow never posted it. So here's a fresh one!

An explanation is in order, as the artisan's offerings are confusing and constantly in flux. The soap reviewed today from Grooming Dept is a vegan formula, which saw some reformulation last summer. It is one of three "regular" bases offered; the other two being tallow and duck fat. Occasionally, fats may be swapped out - for example, lamb tallow (most recently in Angel) for a limited run. While I applaud the artisan's need to experiment and tinker, the promised new "simplified formulas" are even more insane now at 6+ formulas! Having things constantly changing makes customers feel like beta testers. Personally, I'll wait until the dust settles.

The packaging consists of a nice, all-white plastic tub. The artwork has definitely improved since the early days. That said, I'd like to see the branding improve which has been as random as the formulations. Other than a label on the top (outside) of the tub, and a list of ingredients on the top (inside) there's nothing else. The artisan's name and even product name is absent on the tub (as too, for example, is Mallard). Novel and artistic, but a fail in my opinion. We're promised this will improve with side labels, etc... Time will tell.

The official scent notes include blood orange, mandarin, geranium, lemon, lime, bergamot, grapefruit, "herbal accord," neroli, "woody notes" and musk. The scent of Conca d'Oro is overall somewhat heavy, despite the many light, fresh citrus notes. The "herbal accord" does temper them, as do the "woody notes." Underneath it all, there is a bit of a musky base. It's hard to judge a scent from soap alone rather than an aftershave, or better yet - an Eau de ____ where everything's cleaner, crisper. That said, it smells very nice... Very "Italian" (albeit in the cooler months).

While Grooming Dept was criticized early on for "weak scents" this was corrected last summer... Some of the essential oils didn't play well with the chemistry, which was changed at that time. With Conca d'Oro that's certainly not a concern as the scent strength of the soap is strong. Just right and how I like my software. I wish more artisans would offer such strongly scented wares. I went with the prevailing wisdom of loading for about 40s+ (I usually do 30s) and adding a lot of water. Not because of the heavier soap load (it ended up being fairly standard, as it's a harder soap) but because of the ingredients - they just love water.

Now for the performance... The resulting lather was thick and creamy, with excellent cushion and both primary and secondary lubricity. It had a nice, glossy sheen. Easily in the top tier, including current stars such as Wholly Kaw donkey milk soaps, Tallow + Steel and Declaration Grooming. Definitely most impressive. I'd have to agree with some other assessments that you'd be hard-pressed to pin this as a vegan formulation. Considering the ingredients (which are, of course, different than another vegan offering called Basique):

...It should probably come as no surprise that the resulting face feel was also excellent. That's literally a ton of ingredients for a shaving soap - many of which are skin foods. I surely could have gotten away without a post-shave product (but that's not how I roll). The only downsides, in my opinion - is the need to both load and hydrate heavily, working the lather for a good while, for optimal results. The other top tier soaps mentioned earlier both load and lather more easily. I suspect with continued use and dialing it in, things will improve further.

I won't comment on the post-shave today, as I've extensively reviewed Clamorgan by Chatillon Lux previously. Definitely check that out if you're unfamiliar. But a quick recap; the scent has notes of lemon, bigarade, petitgrain, mandarin, bergamot, oakmoss, basil, ginger, patchouli and musk. The scent strength of the toner is strong, with medium sillage and longevity of 4-6 hours. I will add that the segue from the Conca d'Oro accord to Clamorgan is perfect, and they pair very well together (as they're surprisingly similar in notes). You could think of the former as the missing soap to go with the latter.

Hardware for today consisted of the #Yaqi razor head with a #Feather blade on shave three. The head is from the razor reviewed here but with a much lighter handle made out of titanium called the RazoRock Halo. We're talking about a much smaller handle at 90x13mm (as opposed to 100x19mm) and only 45g/1.6oz (as opposed to 200g/7oz). Combined weight of 70g vs. 225g. Like I said, huge difference - it made the combination very, very nimble and easy to manouvre. The resulting shave was better than the last shave and on par with a Mühle R89 easily; though it took a bit more touch-ups. I suspect the Feather blade is more efficient than the PolSilver of the original shave - but not as smooth.

The brush is also a Yaqi piece called the Moka Express featuring a glorious, rightly-sized fistful of real animal hair - a 26mm two-band badger knot (the same as Maggard Razors offers). The name comes from the similarly shaped and named moka pot which inspired it. It's a very nice brush indeed! Build large - and rock solid with a bombastic knot that will bloom bigly. As with most badger knots (but less so than boar) it will take some time to break in and really hit its stride. The #GTP scuttle did its usual standup job in keeping the lather contained and warm.

I have to say, this was a fantastic shave! The soap performed extremely well in all regards as did the post-shave. I was looking forward to seeing the line rounded out by aftershaves in January but the artisan failed to deliver those and lots of other promised products - outside of a small batch in March - and then essentially vanished. To this day we're promised upcoming post-shave products (unfortunately not matching but complementary) and soaps, but that's been promised since April, so... Mo tells me "soaps are curing" and will be released when they're ready. I hope so! The GroomingDept brand had great buzz initially - but now it's nearly forgotten save for the original fans.