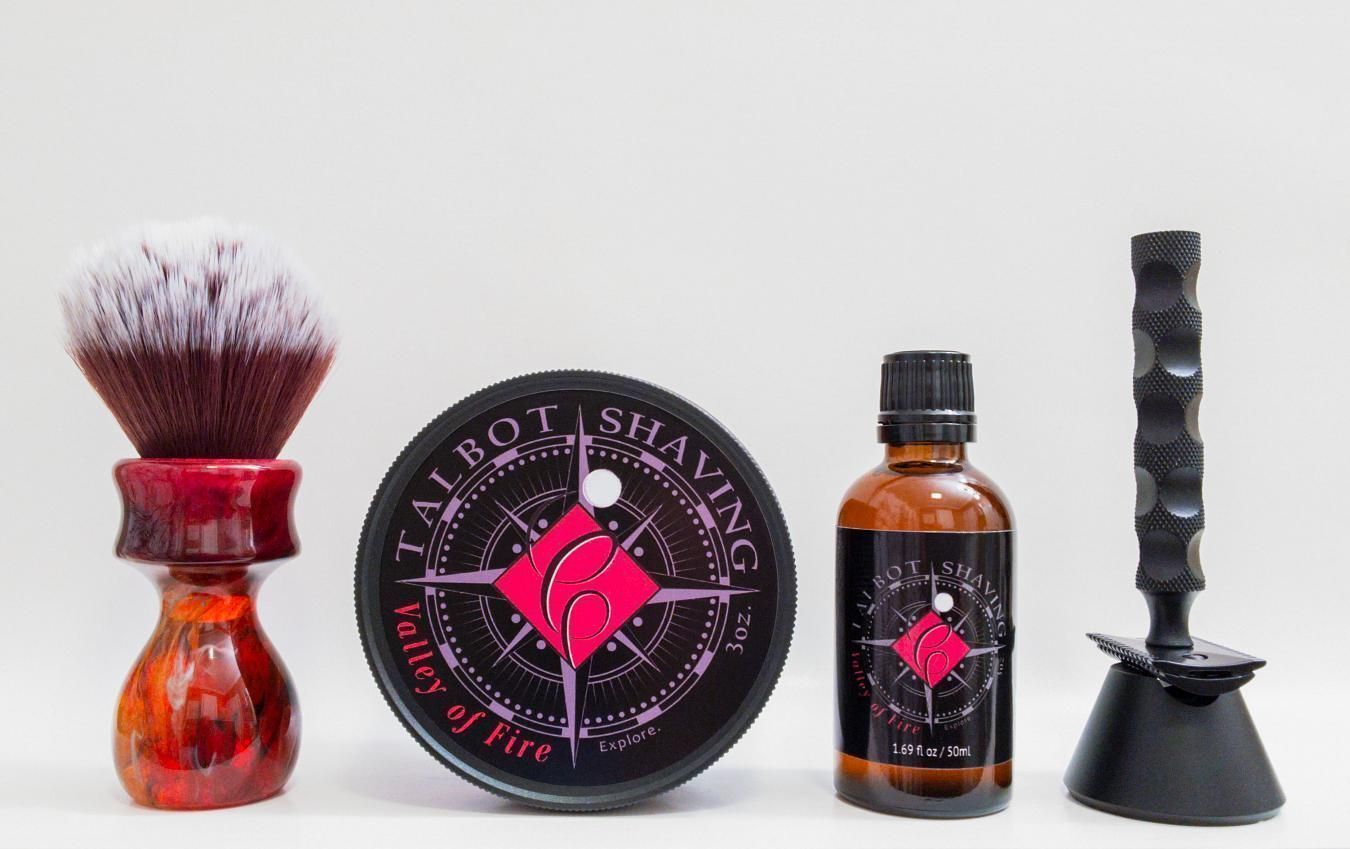 TS and CB "Valley of Fire"

Talbot Shaving and Catie's Bubbles partnered up to bring us Valley of Fire in a #soap and finally, a matching #aftershave!

A scent inspired by the popular cologne, Jimmy Choo Man. Valley of Fire is an aromatic, woody and fruity accord.

Valley of Fire is the seventh "official" offering by #TalbotShaving. The first was actually Ilex but more of a test batch - the first true release was Iliahi Ridge followed by Holland Glen, Edison Lake, Inchcolm and Buttery Brook. Then there was a one-off for a meetup called Lantern Hill (complete with matching #CatiesBubbles aftershave) with distribution limited to attendees only.

If you haven't heard of Talbot Shaving before, it's a fellow wet shaver named Chad Irish. He's dabbling in soapmaking for fun and as a creative outlet on the side and as such, the batches are extremely small (think Bufflehead small) and on the order of 36 tubs, as was the case for Iliahi Ridge. Needless to say, these batches sell out within minutes, if that. I'm lucky enough to have tubs of Holland Glen, Edison Lake, Inchcolm and Governor's Island.

Valley of Fire is the first general release to offer a matching aftershave, also courtesy of Catie's Bubbles. It was available as a soap (3oz.) and aftershave (50ml) set only, for $30 - via either a pre-sale (40 sets) initially or Catie's Bubbles (60 sets) on August 11, 2018 at 6pm EDT - for a total of 100 sets. Naturally, it sold out within 3-4 minutes and that after some initial site issues! So if you got a set, you're one of the elite pre-sale group or damned lucky in case of the latter! The inspiration for this scent was the result of these artisans collaborating with Jason Rudman (a.k.a. "Ruds") who described it thusly:

Valley of Fire state park, loved for its 40,000+ acres of bold, red Aztec sandstone contrasted by gray and tan limestone. The landscape contains ancient, petrified trees and petroglyphs dating back more than two millennia. This place is popular for its scenery, hiking trails and wedding locations.

Ten years ago a story began in the Valley of Fire. Two young, passionate, and imperfect souls pledged to love one and other, until death do them part. They dreamt of a life together, a home together, and a family of their own. Like any couple together a decade, and like the forces of nature that formed this beautiful landscape, there have been beautiful sun rises and fierce storms. In the end, they remain strong and continue that journey and honor those vows.

Valley of Fire is inspired by this couple’s story, the state park in which they wed, and a scent they both love. A scent inspired by the popular cologne, Jimmy Choo Man. Valley of Fire is an aromatic, woody and fruity accord featuring notes of honeydew melon, pink pepper, pineapple leaf, lavender, patchouli and suede. Join Talbot Shaving and Catie's Bubbles with your own journey through the Valley of Fire.

Officially, Valley of Fire has notes of honeydew melon, pink pepper, pineapple leaf, lavender, patchouli and suede. It's essentially a clone of a popular cologne called Jimmy Choo Man (2014) billed as "a modern and fresh fragrance that combines aromatic, fruity and woody notes." Both have essentially identical notes; not having the original I cannot compare them and will assume they smell fairly identical as well.

Initially, you're presented with a punchy, strong cologne vibe... Think Amouage Beach Hut Man in that regard. It borders on being a bit over the top, and definitely a casual scent for warmer weather. On open, the sweet melon and lavender combine with the pineapple leaf to boost the fruitiness and add a green, balsamic kick. Towards the middle it calms down quite a bit, gaining a peppery undertone; while sweet and spicy, it too is a bit fruity and somewhat balsamic - pairing well with top notes and making a great segue between tiers. As it descends into the base, the more earthy patchouli combines with the suede to reveal a more subtle, masculine fragrance. Despite all the notes it lacks real depth. The scent strength; projection and sillage - starts strong but rapidly fades into a light medium with a longevity of 2-3 hours, tops. If you like the scent, get the real EdT.

To recap the soap performance from a more in-depth previous review... The soap is a firmer consistency, not unlike Barrister and Mann white label/glissant and the like. This makes loading with a wider variety of brushes and techniques a breeze. The ingredients of the soap are nice indeed, with several skin foods and slippery oils. The ingredients:

The aftershave is the cheaper, simpler and more alcohol-laden Tonic rather than the Toner. Upon application there's a strong initial alcohol burn, which subsides quickly. While there's a little in there for healing (the two extracts and allantoin), the action is rather light - similarly, there's not much in the way of skin food outside of the Sorbitol (a humectant, like glycerin). It's an okay aftershave; more suited for warmer weather. I generally prefer toners or even balms - less burn, more skincare. The ingredients:

Hardware for today consisted of a #Yaqi Matte Black Mellon head and #ArianaEvans (actually The Shaving Shop) handle called The Assassin with a fresh #Feather blade. I extensively reviewed this razor (a.k.a. Frankenrazor with Standard Razors stand) previously. The brush is a lovely one from #TurnNShave called Flame with a 26mm Motherlode knot... Which may just be my favorite synthetic knot. The #GTP scuttle of course, came along for the ride.

I continue to be impressed with Talbot Shaving soap performance; it is very good indeed. Slickness has been dialed up to 11 in v2 and overall, it's well above average to be certain. Finally having a matching aftershave is awesome; I hope this will continue for future releases. That said, and this is totally a matter of preference and not a complaint about the product itself - I was a little disappointed that the aftershave was a Tonic and not a Toner. I just prefer the latter. Still, we'll take what we can get! For $30, it's hard to beat the value here - and $1 of every sale goes to The Trust for Public Land (Governor's Island and Valley of Fire generated $175 for this great cause!).