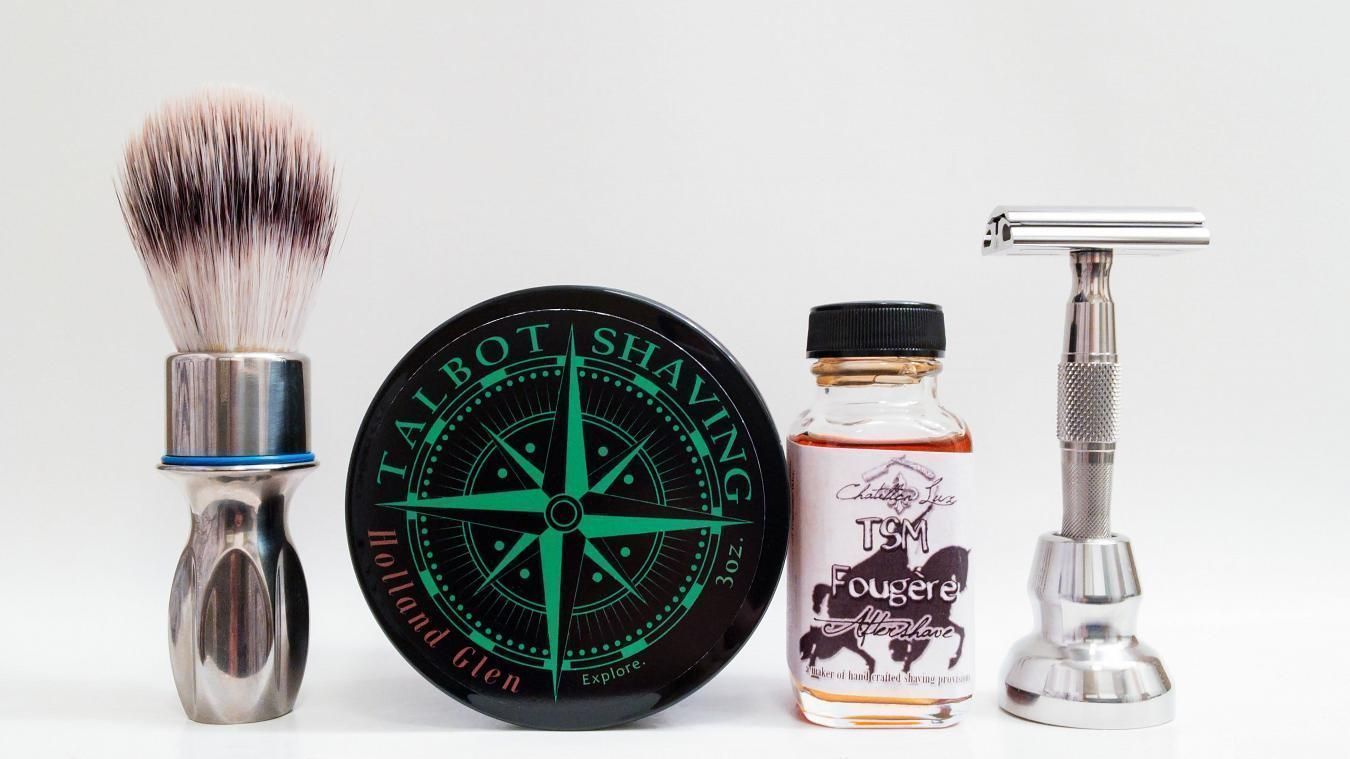 Embracing the fougére love with this second offering from Talbot Shaving called Holland Glen in a #soap with a Chatillon Lux TSM Fougére #aftershave chaser!

Join me on a stroll through Holland Glen. The trail begins at the head as the sunshine permeates through the thin veil of oak, birch, maple and pine. A kiss of warmth tells us that spring has arrived. The babbling stream is heard on the other side of the hill, guiding us along the marked trail. As the trail runs further, the canopy overhead grows more dense, and the mossy earth begins to open and welcome the new life of spring. The smell of the wet earth leads to the sound of a stronger and louder cascade of water. Turning the corner, we find the source, a six foot fall collecting into a pool below, surrounded by mossy rocks and glimpses of sun rays through the treetops above. This is Holland Glen.

Regarding TSM Fougére, by #chatillonlux, I wrote a full review of the soap and scent before along with a follow-up review of the aftershave so check those out for the skinny. It's a deep, exquisite fougére with an impressive accord; notes of oakmoss, incense, lavender, vetiver, neroli, tonka bean, petitgrain, nagarmotha, clary sage, cedarwood, grass, musk, bergamot, grapefruit, Spanish moss, violet, geranium, violet leaf and anise. While it's decidedly brighter than the soap, it was a great follow-up and the first scent I thought of to complete this shave (and is what's rated in the chart above). But I'll focus on the soap below.

Holland Glen is the second "official" offering by #TalbotShaving. The first was actually Ilex but more of a test batch - the first true release was Iliahi Ridge.. If you haven't heard of them before, it's a fellow wet shaver named Chad Irish. He's dabbling in soapmaking for fun and as a creative outlet on the side and as such, the batches are extremely small (think Bufflehead small) and on the order of 36 tubs, as was the case for Iliahi Ridge. Needless to say, these batches sell out within minutes, if that. I'm lucky enough to have a tub of Holland Glen and after today, I'm going to keep a close eye on the upcoming releases of Edison Lake and Inchcolm that are set to drop literally any time now. The only downside is that only soap is available; no aftershave. Value is excellent at $12 for three ounces. It was released on May 5, 2017.

Let's talk about the scent profile. It's described generally as a top note of citrus sunshine that blends to a forest floor, dirt scent. Essentially a fragrance sub-class that is known as an aromatic fougère - a derivative of the fougére class - as it contains additional notes of herbs, spice and/or wood - in this case, herbaceous. On a more specific level, aldehyde, bergamot, c12, (some help from) undecanol and lavender provide the citrusy, slightly floral top notes with an herbaceous middle of clover (amyl salicylate) and earthy geosmin blending into a base of amber and oakmoss.

That sounds great, but what does it smell like? If you're a fan of fougéres, you know they're essentially very "green" scents (fougére is the French word for "fern" after all, which ironically, has no scent). Holland Glen is no exception, and in fact, it's probably the deepest, dankest fougére in my den (and I have quite a few, being a favorite). The top and middle notes are light and fleeting; barely disguising a rich, earthy scent reminiscent of a wet, loamy forest. If you're a fan, this stuff is gold. Scent strength is strong in the tub, mellowed only slightly during lathering. Just how I like it.

The soap is a firmer consistency, not unlike Barrister and Mann white label/glissant and the like. This makes loading with a wider variety of brushes and techniques a breeze. The ingredients of the soap are nice indeed, with several skin foods and slippery oils:

Performance was very respectable. The lather produced was creamy, with very good density, primary and secondary lubricity and resultant face feel. Load this soap a bit longer than usual and add water to slowly to taste, as it has a bit of a narrow sweet spot. The cushion was very good and the slickness during the shave as well. Only the residual slickness dipped slightly.

Packaging is basic, but very nicely executed. These are the same tubs that Catie's Bubbles and Dapper Dragon use. The label quality is on par with the former (and better than the latter). While the neck of the tub is narrower than the overall diameter, it does serve to keep proto-lather contained and there's plenty of room for loading. Branding is clear and consistent (among the two releases so far and the teased upcoming releases). Artwork is simple and in an illustrative style (essentially a stylized compass) in line with the company motto of "Explore."

Hardware for today consisted of the #TimelessRazor in a custom "mild edition" with a #Stork handle and rocking a #PolSilver blade on shave three, with the #BSB Shaving Brush doing The Needful™ in the #GTP scuttle. A lovely shave with top class components... Not BBS today, but that's okay.

A really nice shave today... I was pleasantly surprised by the overall performance of the soap, including lather and scent. The aftershave of course was a known quantity (top tier) and finished things off beautifully. I'd definitely consider picking up future releases from Talbot Shaving as Holland Glen is on point.