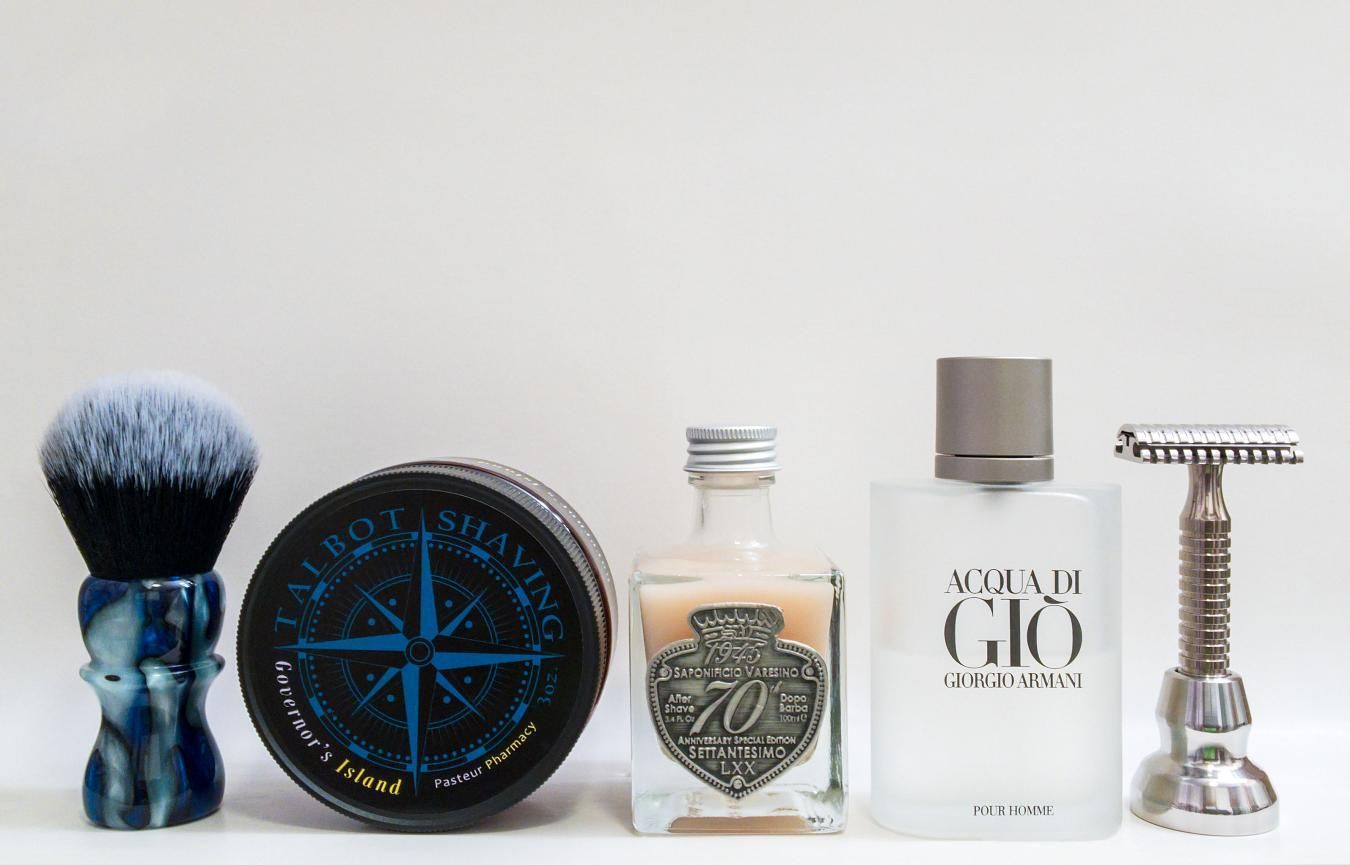 'Ello gov'na! An aquatic, woodsy scent from Talbot Shaving called Governor's Island in a #soap that's a Limited Edition and only available from Pasteur Pharmacy in NYC!

When I was asked by Pasteur Pharmacy to make a one time soap in a small enough quantity that I could actually make happen, I was pretty excited. Having met Leon at prior meetups, I’m familiar with his dedication to supporting the hobby. So the good people of Pasteur’s came up with a pretty cool idea. In New York harbor resides Governor’s Island, a 172 acre protected land that hosts a gamut of outdoor opportunities. Being only 800 yards away from Manhattan, it felt like the perfect way to merge Pasteur’s with the great outdoors. The scent is a blend of aquatics and lighter wood notes that create a pretty unique and fresh scent.

Governor's Island is the sixth "official" offering by #TalbotShaving. The first was actually Ilex but more of a test batch - the first true release was Iliahi Ridge followed by Holland Glen, Edison Lake, Inchcolm and Buttery Brook. Then there was a one-off for a meetup called Lantern Hill (complete with matching Catie's Bubbles aftershave) with distribution limited to attendees only. Stay tuned for the next release, Valley of Fire (the first general release to offer a matching aftershave, also courtesy of Catie's Bubbles).

If you haven't heard of them before, it's a fellow wet shaver named Chad Irish. He's dabbling in soapmaking for fun and as a creative outlet on the side and as such, the batches are extremely small (think Bufflehead small) and on the order of 36 tubs, as was the case for Iliahi Ridge. Needless to say, these batches sell out within minutes, if that. I'm lucky enough to have tubs of Holland Glen, Edison Lake and Inchcolm. Missed out on Buttery Brook sadly, despite the first, larger than usual batch.

The only downside is that only soaps are available; no aftershaves (until Valley of Fire arrives). Value is excellent at $15 for three ounces (an increase from the the previous $12 price). Governor's Island was released on July 19, 2018 (at 10am EST) with only 100 tubs made and is a Limited Edition - available only at Pasteur Pharmacy in NYC. They are kindly asking that customers only buy one tub. As of July 23, 2018 - a few tubs remain.

Officially, Governor's Island has notes of cyclamen, lemon, grapefruit, ylang ylang, oakmoss, musk, tonka bean, sandalwood, amber, bergamot, cardamom, jasmine and lily of the valley. It's essentially an aquatic with a soft woodsy base. Indeed, I get a very clear aquatic top, first and foremost - with a slightly floral middle - and a warm, woodsy base. You might note that there's no ozonic, salty or other typical marine notes. Instead, this accord relies on oakmoss, citrus and florals (especially lily of the valley; muguet in French) to achieve the aquatic vibe. Interestingly, Edison Lake is billed as an aquatic as well, but I definitely got that vibe more from Inchcolm (which is billed as a floral). Either way, it's a light, fresh warm weather scent that should pair well with lots of aftershaves and colognes - it's really nice. Scent strength is about medium.

The soap is a firmer consistency, not unlike Barrister and Mann white label/glissant and the like. This makes loading with a wider variety of brushes and techniques a breeze. The ingredients of the soap are nice indeed, with several skin foods and slippery oils. Here is the formula for v1, followed by v2 for comparison:

Performance was outstanding by every metric. Loading was super easy as was the lather generation. The lather produced was creamy, with very good density, outstanding primary and secondary lubricity and resultant face feel. Load this soap a bit longer than usual and add water to slowly to taste, as it has a bit of a narrow sweet spot. This v2 release improves overall slickness - primary is just amazing now (seriously) and corrects secondary slickness (which dipped a bit from primary in v1). The secondary slickness however, has a slightly more rapid falloff than average after a bunch of strokes. A few drops of water and it's back to incredible instantly. While this can be said of most soaps, some handle this situation a bit better. Regardless, this soap base is outstanding in every way. It's especially nice and probably among the best soaps out there for straight razor shavers; just add a bit more water.

Packaging is basic, but very nicely executed. These are the same tubs that Catie's Bubbles and Dapper Dragon use. The label quality is on par with the former (and better than the latter). While the neck of the tub is narrower than the overall diameter, it does serve to keep proto-lather contained and there's plenty of room for loading. Branding is clear and consistent among all releases thus far. Artwork is simple and in an illustrative style (essentially a stylized compass) with a band around the outside stating Talbot Shaving, the product name Governor's Island and finally, Pasteur Pharmacy (other releases state the motto "Explore" here instead).

For the #aftershave, I went with Saponificio Varesino 70th Anniversary - this stuff is amazing. It's more viscous than you might expect, and gives the performance of a balm. It's not at all greasy, heavy or tacky. The healing and moisturizing properties are top tier and the resulting face feel is exquisite. My only gripe is that #SapVaresino doesn't make any EdT of their own to keep the scent going all day. That said, scent strength is fairly strong but longevity only about two hours or so. I followed up with Giorgio Armani Acqua di Gio #EdT (and #deo) for the final scent, which is quite similar and my usual pairing.

Hardware for today consisted of the #TimelessRazor in an "aggressive edition" (.95mm gap, custom dual scalloped and open comb combo baseplate) with a #Stork handle and a #Permasharp blade on shave two, with the #WildWestBrushworks brush (sporting a 26mm Tuxedo knot) getting jiggy with it in the #GTP scuttle.

I was impressed with the scent of Governor's Island and as noted, it's definitely got an aquatic, slightly floral and woodsy base to it. The scent is wonderful and can easily pair with a lot of others. Performance of the soap (like the other offerings from #TalbotShaving) is very good indeed. Slickness has been dialed up to 11 in v2 and overall, it's well above average to be certain. If any of the Talbot Shaving soap scents appeal, you can't go wrong... If you can get one.