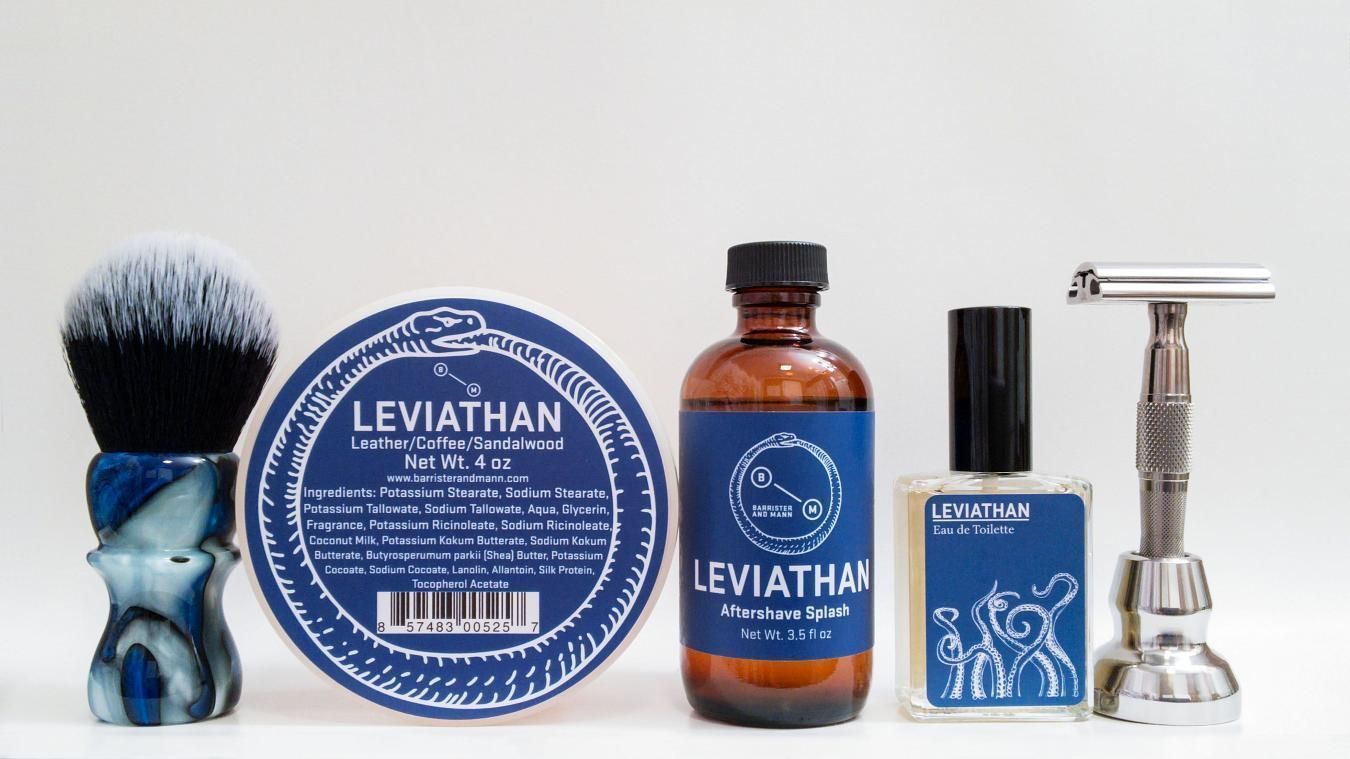 There's something about coffee and leather that's relaxing and just right - Barrister and Mann Leviathan #soap and #aftershave throw in some sandalwood for good measure and now has a matching #EdT!

Leviathan. The Biblical Serpent who will consume the world come the End of Days. Legend has it that he lives beneath the seas, awaiting his chance to devour all of Creation. Some sailors still speak his name in hushed tones and cross themselves to ward off his ancient, ravenous hunger.

In perfume, there is nothing more darkly ancient than leather. We discovered the formula for an archaic, forgotten Russian leather accord and blended it with notes of sandalwood, coffee, cedar, and musk to create a dark, feral scent well-suited to its namesake. Elemental and at times slightly unsettling, Leviathan is a scent to accompany you to the end of the world.

I've done a lot of reviews of #BarristerMann goodies over their history - in fact, almost every product they've released! Click on the hashtag to browse them all, or check out the History of Barrister and Mann for a more targeted approach. Regular readers should be well aware of the performance of both soap and aftershave, especially in this older formula. As for this particular scent, I've reviewed Leviathan previously (and have used it a lot) since picking it up in 2015.

This is a great scent... One of the gems from Barrister and Mann that perhaps signals the arrival of autumn like no other (except perhaps Hallows that is). Officially it's listed as having notes of coffee, leather and sandalwood. That's it - easy peasy. And we've all been very happy with the scent, as it has a large number of ardent fans. But what it really needed was some oomph - in the form of an Eau de Toilette (EdT). This year... It happened (on September 22, 2017). So that's what I'm going to talk about today.

The EdT comes in a fairly standard Barrister and Mann EdT bottle; it contains 30ml and sells for $32. While the bottle is relatively generic, the label is nicely customized. It's only outdone by the fully custom box that it comes in (not pictured). If nothing else, Barrister and Mann does some mean branding and packaging - and Leviathan is a good example of that.

Scent strength is a strong medium, sillage (at first) is about the same but longevity is disappointingly short at about 4 hours. I say "at first" as far as sillage goes, because when you first apply it - it's quite potent. Unfortunately, it settles down rather quickly and even fizzles out within an hour or two. Beyond that it fades into history by four hours or so. A shame.

What's really nice about the EdT is that it lets the fragrance truly shine - something the aftershave doesn't quite muster. When first applied, you get a rather healthy shot of coffee right up front, overpowering the other notes. And it's a really nice coffee; most tend to be artificial, too sweet or flavored. This is the real deal. By the middle and base you get a sense of the leather and sandalwood as the coffee takes a firm backseat. If you're a fan of Leviathan then the EdT will really make you smile.

Hardware for today consisted of the #TimelessRazor in a custom "mild edition" with a titanium #Stork handle and a #PolSilver blade on shave four. The #WildWestBrushworks brush did a great job lathering this older formula (essentially white/black label) in the #GTP scuttle. This is my favorite formula in that regard; perhaps Glissant a close second - but Barrister's Reserve a bit in third. Of course, performance of the bases are a direct reverse of that. Something to keep in mind; the good stuff never comes easy!

Overall, I'm really impressed with the EdT. As a fan of the scent, I had to have it of course... Though I do have to say, I was disappointed with the longevity of the EdT. I was really hoping for at least a "most of the day" stretch here. Kudos to Barrister and Mann for making this, at any rate! The fans thank you.