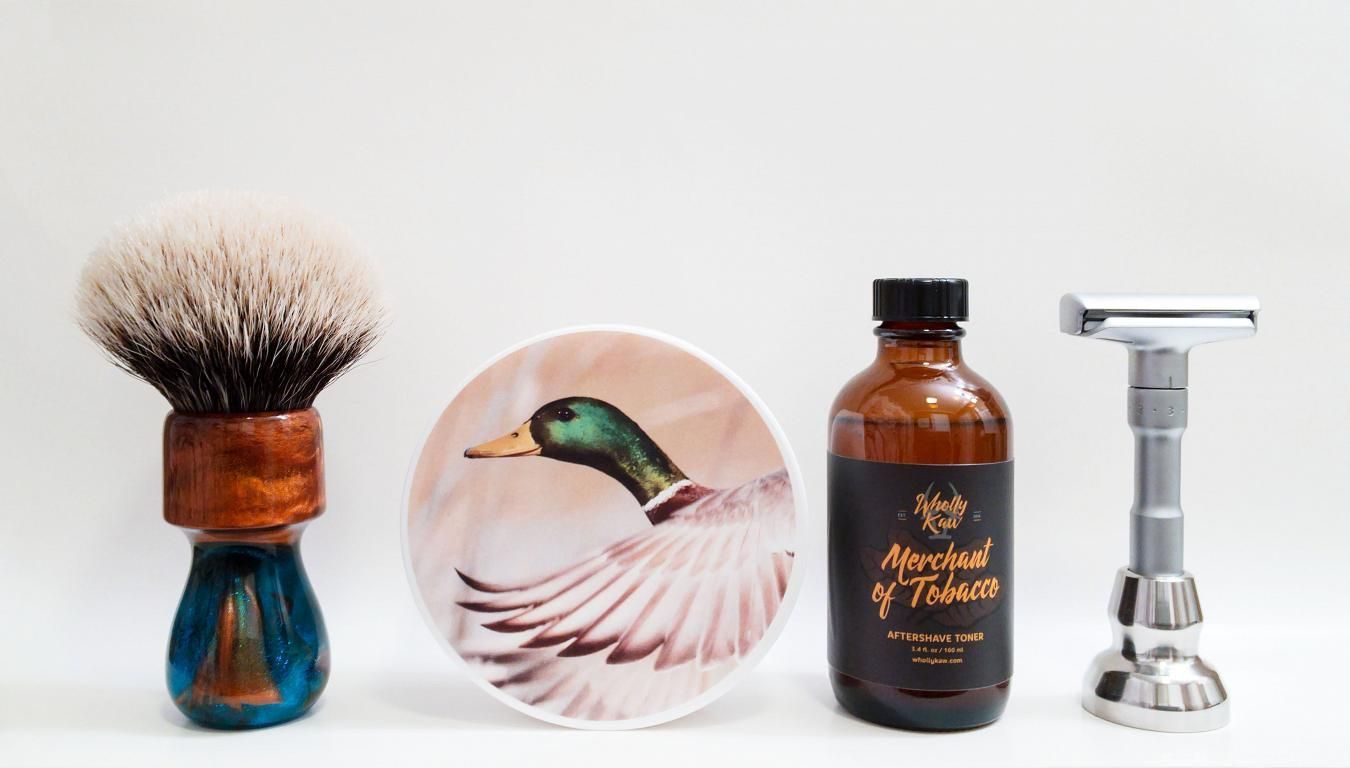 Wow... Thick, slick and creamy only begin to describe the Grooming Dept #soap known as Mallard. Followed up with a fitting #aftershave called Merchant of Tobacco by Wholly Kaw!

I did a rather extensive review of Grooming Dept Basique just recently, so a lot of that applies. Today I'll focus on two key differences; the soap base and the scent. We're promised that the dust has settled and #GroomingDept will offer three main lines of soaps. The previous review was the vegan line, while today's review concerns the duck fat line. The third is tallow. This duck fat line will be known under the name Mallard. It's one of the most expensive soaps offered, at $24 USD (though does include shipping) and being popular, often sold out.

Additional releases in January 2018 from the #GroomingDept will have names like Mallard - Rose and Mallard - Chai but this one is simply Mallard. Yes, it's all rather confusing... But let's move on. The scent notes include chocolate, sandalwood, ginger, spices, vanilla and coffee. Indeed, you get a very intoxicating accord of chocolate forward, with supporting vanilla and coffee... It's spiced up in a very subtle way by the ginger and "spices." On the base is where you get the sandalwood. You could pair this soap with several aftershaves (as there are no matching aftershaves from this artisan - yet). For example, the one I used today - Wholly Kaw Merchant of Tobacco or Oleo Soapworks Xocolātl and Barrister and Mann Leviathan to name a few others; they're all chocolate and/or coffee and even sandalwood. There's also Storybook Soapworks Coffee Spoons which makes a nice pairing, if just coffee. I think the #WhollyKaw choice today made a good, all around match (which has notes of tobacco, bourbon, oud, black pepper, vanilla, Peru balsam, honey and bitter cocoa).

The scent strength of the soap in the tub is a robust medium and hits strong when lathered. It also reaches its full potential as a complete accord when lathered. I would suspect that an aftershave would really bring it home, and I look forward to seeing a matching one, one day. The notes just tick all my boxes - so I'm especially delighted at the scent strength. Most artisans tend towards medium, if not a light medium.

Now let's talk about performance... To recap the first word of this review - "wow." With a wide latitude for water, the more the better (to a point) as it makes the lather slicker. It's thick and creamy, practically yogurt in consistency. Sporting a glossy sheen at its sweet spot, it's also very slick. You need to load this soap fairly heavily; thus perhaps, the commensurate amount of water needed. I loaded for a full 60s, where I usually only do 30s. Like most top tier soaps, you'll also want to work the lather good and long, to really let it develop. It was a sight to behold when I finished, and interestingly, an off-white sort of eggshell color (the soap itself is a light brown). To sum up, the lather was plentiful, creamy with lots of cushion and outstanding primary and residual slickness. Shaving with a very efficient razor was a real joy, thanks to the cushion and slickness. The resulting face feel was also rather amazing.

Mallard is perhaps one of the best performing soaps that I've used.

Of course I'll need much more "face time" with it to cast a conclusive call - but I'm quite impressed. For the sake of completeness, let's take a quick look at the ingredients of the soap:

Besides the usual soap ingredients, there's the duck fat (which is super fatty) and around which it's based. A whole array of skin foods for moisture (countering the kaolin clay, which can be drying) and healing that also serve to bolster the slickness. Some hydrolyzed silk protein (a.k.a. tussah silk) adds another level of plush. Sodium citrate should help those with hard water in lathering. Lastly, there's sodium lactate to firm up the soap (and bolster the glycerin as a humectant) which makes it easier to load. Many artisans tend to have formulas that are bit too soft. I'm thinking all the oils and butters, combined with the hardness are what makes this soap require the longer loading time.

Hardware for today included the #Merkur #Futur razor, set on "3" for a nice efficient shave courtesy of the fresh #PolSilver blade. The brush, which is also quickly becoming a favorite is a custom piece from #ThatDarnRob called Pueblo in a chunky, entire body lathering configuration of 30mm - fit with a Maggard Razors two-band badger knot. It's a beast, and it's breaking in wonderfully - even from just the maiden shave with it last time. Combining its size and the longer loading time, I had enough lather for a three pass shave... Yet if I squeezed the knot at the end, I could've gone for a forth or a head shave (if I did such things). The #GTP scuttle struggled to contain the mammoth brush but kept the super plush lather nice and warm.

Wow. I'm definitely putting this soap on the short list to try again, especially combined with that brush. I was truly impressed by this soap and think it's definitely in the top tier, performance wise. As in my prior review of Grooming Dept Basique - I think if the artisan were to step up the branding and packaging, and also categorize the website more clearly - it could take them very far indeed. Throw in matching aftershaves and we could see another major player here. Stay tuned for more shaves with this and other soaps from them.