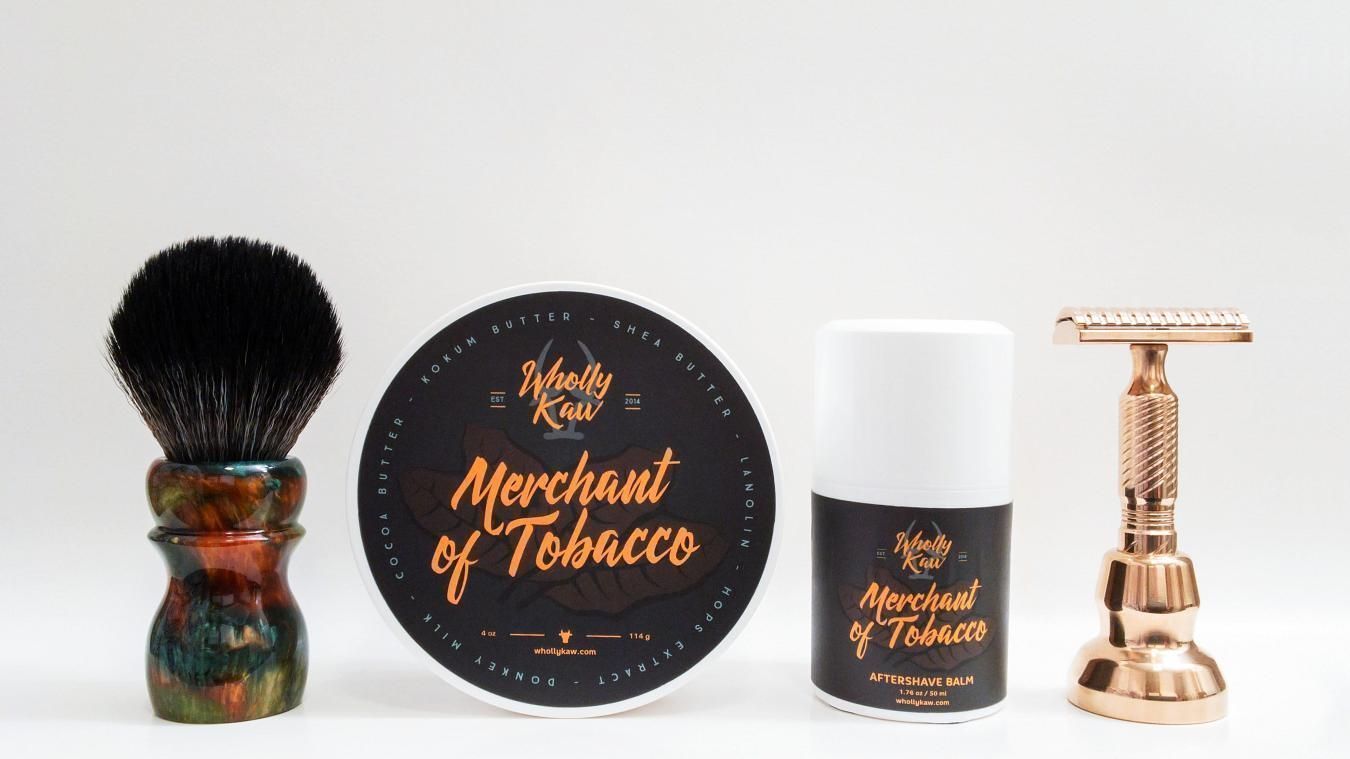 Rocking the donkey milk soap base in an "interestingly bold" scent from Wholly Kaw called Merchant of Tobacco in a #soap and #balm combo.

I've reviewed several of the latest "donkey milk" releases from #WhollyKaw (click the hashtag to browse them) so I won't get into performance today. I'm of the opinion that it's arguably among the best bases on the market right now. It's a fairly "hard" soap, so easy to load and drama-free, has excellent performance in terms of lather generation, cushion, both primary and residual slickness and finishes off with a great face feel. The balm is no slouch either, providing excellent healing and moisturizing properties without feeling tacky. The packaging is all the latest from Wholly Kaw, including new artwork on the new packaging, including an airless pump for the balm. Check out my review of Fougére Bouquet for more on the performance of both.

My only gripe is branding/artwork related on the packaging - it's starting to wander and stray a bit from the established norm set earlier this year during the big rebranding... First noted with King of Oud which saw the product name as a golden colored gradation on a script typeface (same as the company name) with a drop shadow to provide a 3D look. Merchant of Tobacco dials that back some, returning to the same yellowish color as before and dropping the drop shadow, but retaining the script typeface. Both of the latter also contain subtle tweaks to the label, including key ingredients called out along the circumference and where the former relocated the tagline "Premium Shaving Soap" from the middle of the label to the bottom, the latter drops it entirely. Finally, the latter replaces the Wholly Kaw logo with stylized tobacco leaves in the background, under the product name. There are now three different styles; four if you count the vegan formulation, which is an inverse of the tallow. The balm label is also new; darker and more colorful, matching the soap tub. Clearly some tweaking is going on. I think this is my favorite iteration, but let's hope it stabilizes soon. Yes, this is a pet peeve of mine, having an advertising art & design background.

Scent, then... When I first smelled Merchant of Tobacco out of the tub, I was immediately captivated by the heavy(!) aroma of bitter cocoa. It wasn't until I applied the balm that I got the full life cycle of the accord though, and I have to admit that I went from liking it, to not - then liking it again. It's different, to be sure - and might not be everyone's cup of tea. I'd definitely place it as a cooler weather scent. Officially, the notes are tobacco, bourbon, oud, black pepper, vanilla, Peru balsam, honey and bitter cocoa. In practice, you are first hit with a healthy dose of bitter cocoa, and once that burns off a bit you get the tobacco creeping in with just a hint of black pepper. During the transition into the base, the oud wood and Peru balsam (which itself is warm and woodsy) get a little lost before it settles into a warm mix of bourbon, vanilla and honey with light tobacco undertones.

I'll say right up front that this scent is tenacious! The sillage is a respectable medium (and then some) while the longevity is an impressive 8+ hours. Out of the soap tub you get hit over the head with the scent (mostly the bitter cocoa) but it mellows down quite a bit and blends well once lathered. Not so with the balm. It goes on with a strong scent strength - and mellows to a high medium as it ever so slowly fades away. I suspect that the honey is really carrying the scent here, but with the bourbon and vanilla to balance it, it's not overly sweet or readily identifiable. Thankfully, it's nothing like the abomination that was Phoenix Artisan Accoutrements Sk-8 Shop (which was dominated by mānuka honey).

Hardware for today included the #TRBR38 bronze razor from #TimelessRazor with a #PolSilver blade on shave two, while the lovely Terra brush from #LowbornSupply had its way with the lather in the #GTP scuttle.

I suppose it goes without saying that it was a lovely shave today with some excellent software bases. I'm still waffling a bit on the scent, but overall it's grown on me; like I said earlier, it's rather different and certainly not an every day wear. The bronze razor put in a good showing today, with a nice smooth shave - albeit more of a DFS than a BBS, especially along the jawline... But I can live with that.