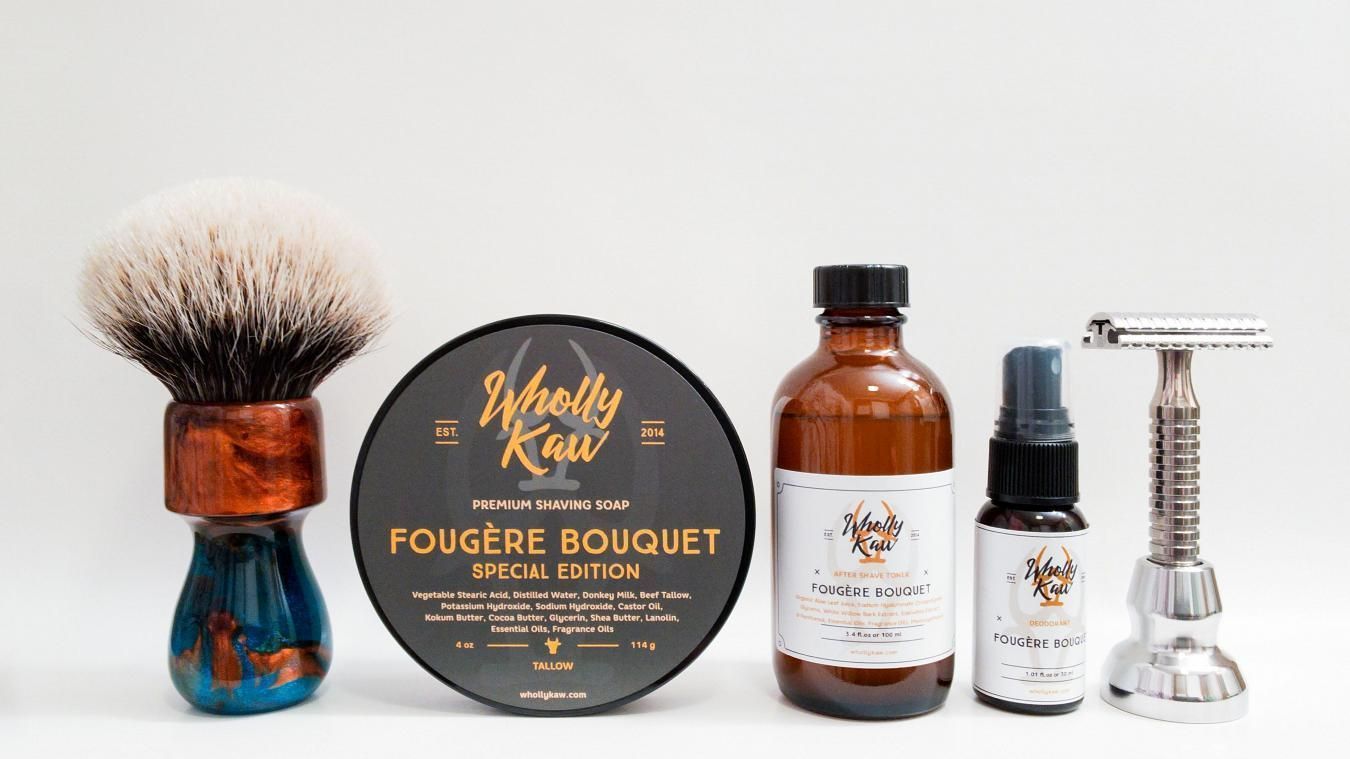 One of the more extensive lines in shaving today, is from Wholly Kaw in the Fougére Bouquet scent - today I used the #soap, #balm #aftershave and #deo (all that's missing is the new EdT/EdP)!

I've reviewed #WhollyKaw a fair amount on this site (just click that hashtag to browse them all) and I've even reviewed Fougére Bouquet in-depth before; albeit with the balm. Today I used a bit of the balm (not pictured), but finished off with the recently acquired aftershave for the scent on places other than my face. Also new today, is the recently released deodorant in a matching scent! Just a heads-up; this is a 30ml sample/travel size; the standard is a 100ml. They're priced at $10 and $20, respectively. Released even more recently by Wholly Kaw is an EdT and EdP strength Fougére Bouquet to round out this line... And they're priced at $50 and $75 respectively, if you're wondering.

As in my other reviews of the donkey milk formulations, this is a fantastic soap formula, and arguably one of the best on the market currently. Loading, lathering - easy as pie. The soap generates ample, creamy and cushiony lather with excellent primary and secondary lubricity. The resultant face feel is also quite choice. The balm of course, brings it home further, and a little goes a long way. The aftershave, which I actually didn't use on my face today is also a great option. I just applied it on my wrists and neck, etc. for the scent, since I don't have the aforementioned EdT/EdP.

The deodorant is a new direction for Wholly Kaw and what I'm really testing today. To use it, it is suggested that you apply 3-5 spritzes under each pit (I used three). Hold the bottle close, as the spray pattern is a bit wide. The juice is strongly scented... And easily lasts the whole day (12+ hours). I don't stink when I sweat, so I can't really comment on that aspect. And being that it's only a deodorant and not an anti-perspirant there's not much to discuss on that front. Making this last leap for artisans is a tough pill to swallow, as it enters FDA regulation territory. An extensive hassle at the very least. I can say the stuff lasted quite a while and I got whiffs of it throughout the day.

That said, it has a pretty nice list of ingredients. It does not contain aluminum chlorohydrate, baking soda, parabens, phthalates, antiperspirants or oils and butters. It should also not result in stained clothes or discolored skin. That leaves a natural blend of plant-origin amino acids, essentially:

It's actually more than just a simple deodorant - that is, fragrance and a carrier. There are ingredients to actually fight odor on a number of fronts. The ad copy might explain this best:

Actives and anti-bacterial agents fight the odor generating bacteria from sweat. The product contains natural blend of plant-origin amino acids and other ingredients that help to mask unpleasant smells and change them into more pleasant odors. The synergistic composition of the actives is highly effective against microorganisms causing body odor. The blend of plant extracts acts in synergy to prevent odours and irritations. Anti-urease action prevents urea degradation into ammonia allowing skin pH stabilization, maintaining its physiological balance, avoiding irritations and unpleasant odors.

So what about the price, then? Is $10 for a 30ml and $20 for a 100ml bottle worthwhile? I haven't used it long enough to say on a performance front. On the surface, it does seem expensive when compared to OTC options... But keep in mind that those also tend to include a lot of weird chemicals, and that's just the deodorants. Let's compare apples to apples with two popular natural options. Oars + Alps sells a 75ml stick deodorant for $14 while Native Deodorant sells a 75ml sized stick deodorant for $12. There is of course, no shortage of natural options - especially these days - and run the gamut with the cheapest option being Sam's Natural Deodorant Stick ($10 for 3oz.) - while the most expensive option is (a fully hipster sounding) Agent Nateur & Shiva Rose Holi (Rose) Deodorant ($24 for 1.7oz.). So in the end, the $10-20 range of Wholly Kaw deodorants seems priced accordingly.

It currently comes in the following scents, which already have a soap, aftershave splash and toner as well as a balm to match:

Hardware today consisted of a custom #TimelessRazor "aggressive edition" razor (with a .95mm gap on a custom scalloped/open comb combo base plate with scalloped top cap) fit with a RazoRock Halo handle in titanium and a fresh #PolSilver blade. The #GTP scuttle barely fit the brush, and it was more twirling and twisting than actual whipping. But the lather stayed nice and warm... The brush is the real hardware star of the show, however.

Fresh off #ThatDarnRob's last drop is this custom Pueblo handle - poured in a copper and translucent, iridescent blue resin - fit with a Maggard Razors 30mm two-band (finest) badger knot. From tip to plug bottom it stands 72mm tall. It's not broken in yet, so not even close to being as soft or as bloomed as it will eventually be... It'll take at least a dozen (if not twice as many) shaves to really start hitting its stride. As it is, with only the slightest hint of pressure the knot covers an entire puck of soap! The knot splays well and is surprisingly (but not overly) dense. No scritch; the tips are soft out of the gate. So far it's lost no more than 2-3 hairs (typical) and didn't have any funky smell at all.

I have to admit that I was initially hesitant as I'm a fan of silvertip badger knots. Their soft backbone might have made this sucker more like a mop though; this one has quite a bit more - and more than I'm used to. But after just an initial test lather and today's shave it's softened up a bit already. Again, time will tell how it breaks in. As for loading, my max is generally about 30s and today I gave it 35s as a start. I had enough lather for three passes, but I had to squeeze a little extra out of the brush for the last one, as it's a bit of a (mild) hog. I'd say loading 40-50s (if not a full minute) should get you close to what you might be accustomed to with smaller brushes.

Nothing says "that boy ain't right" like wielding a 30mm badger knot.

A great scent in one of the most extensive lines in shaving today, from Wholly Kaw. The soap, aftershave and balm we know to be fantastic and the new deo promises more of the same. A bit pricey at first blush, it actually competes fairly well in the natural deodorant arena. The bonus of course, is that it matches the scents you already know from your shaving kit. Throw in the matching EdT/EdP and you're really cooking with gas. As for the insane, monstrous, truly nutty brush... Kids, don't try this at home.