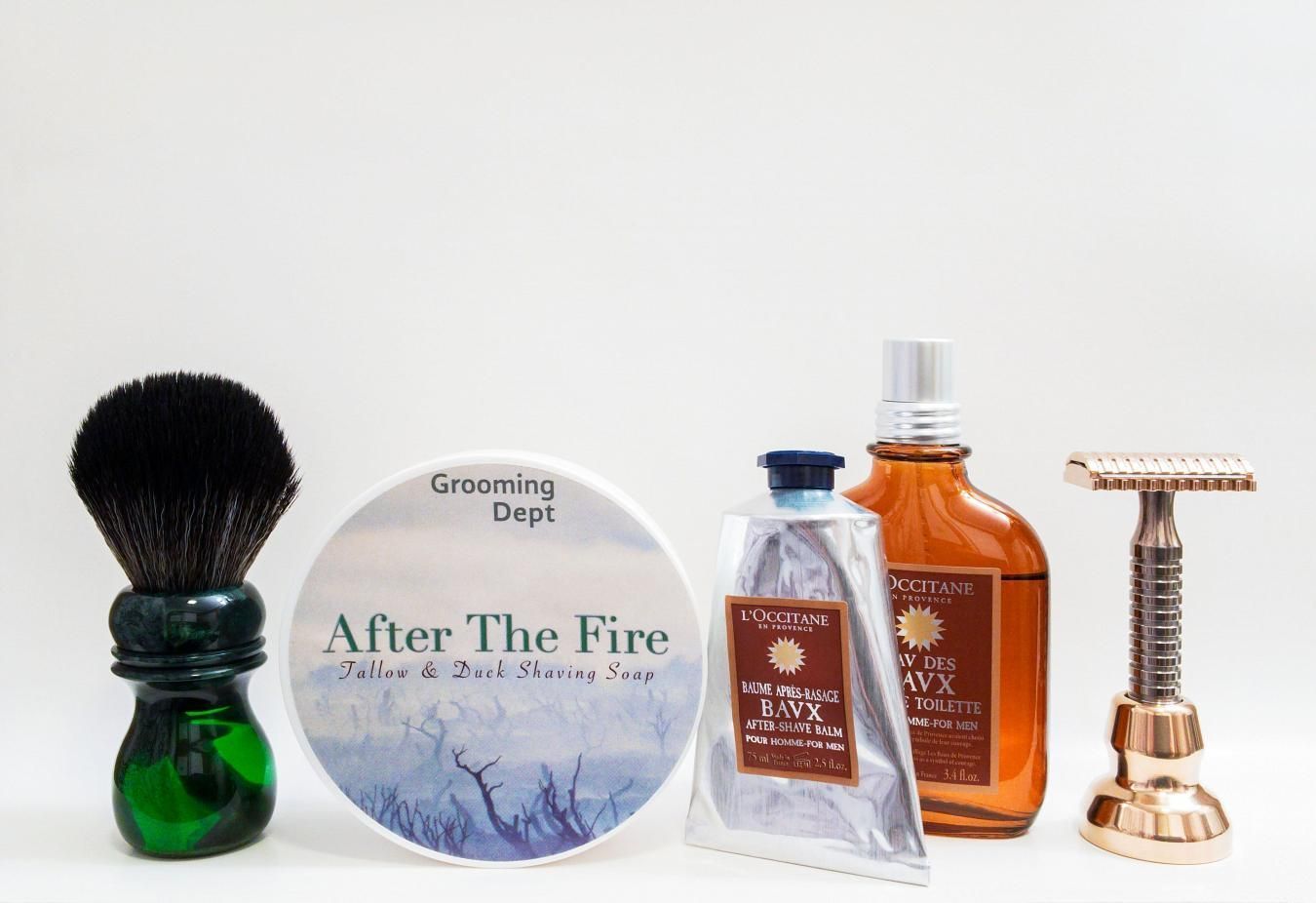 Grooming Dept "After the Fire"

The scents is predominantly a lime forward barbershop scent with smoke and resin as something extra! The smoke is light but complex partially from Cade + Guiacwood and a hint of Labdanum resin.

A brief note about the software today. I've done a full review of L'Occitane en Provence Eau des Baux previously. As with most #loccitane software, it's gold. The scent is also excellent. Moving on... The soap was from the #GroomingDept and called After the Fire which is in a beef tallow and duck fat base. Officially it's a lime forward "barbershop" scent with smoke and resin. The smoke is derived from cade, guiacwood and labdanum resin. To be honest, I didn't get a whole lot of lime or barbershop; it was very subtle. What I did get more of was an equally subtle smokiness. Overall I'd simply call it a subtle "smoky (forward) barbershop" scent.

The performance, as with all Grooming Dept soaps I've tried so far - is outstanding. The lather is unique and almost otherworldly. The lather is thick, very creamy with excellent cushion, excellent primary and secondary lubricity and face feel. It's seriously among the best soap bases out there right now. The other types I've reviewed are Basique which is vegan and Mallard which is duck fat. The third regular base is tallow. Yet the base for After the Fire is somehow tallow and duck fat. So very confusing, and the artisan promises just three bases going forward, but they need to be more clearly delineated... Especially since "one off" bases will continue. It just feels like every scent has a different list of ingredients. For completeness:

Let's talk about the #TimelessRazor #TRBR78 #razor - again. Unlike my last shave with it which was absolutely horrid... This shave was quite nice indeed! I used the exact same razor configuration of scalloped top cap, .78mm open comb base plate and #PolSilver blade on shave five. What I did change was the bronze handle for a RazoRock Halo in titanium. Why? My nasty little shave on Friday had me troubled all weekend. Surely this razor can't be that bad? Then I had an epiphany.

One thing that threw me was when Timeless Razor suggested that this razor is "comparable to the .95" and another was the fact that I've been using this razor with the pretty mild overall .38mm base plate. As to the first point, a more apropos comparison would be "comparable to the Mühle R41." Unlike the .95mm, this .78mm has more blade feel and bite. Whereas the former can be wielded a bit sloppily, the latter requires more care and a much lighter touch - especially compared to the .38mm. As a result, I think I subconsciously applied some pressure, even if it wasn't very much at all (and certainly not how I use the R41). Then there's the very weighty bronze handle. This probably contributed as well; thus the swap to a titanium and very much what I use with the .95mm. Finally, there's the basic fact that all of these aggressive razors are "Monday morning shavers" for me; not a daily driver. So, you put everything together and - voila.

The result was a shave very reminiscent of the R41 overall. Apply no pressure at all, or at least remind yourself of that so you're conscious of it. Treat it like an R41. It's not as forgiving as the .95mm nor is it as smooth. It goes without saying, it's leagues beyond the .68mm and .38mm mild versions. Also of note is now that I've shaved with it the second time, the angle required is a bit more intuitive. The open comb was not a bother at all. That's despite the squared off, abrupt design of it. I still question what Timeless Razor was thinking with this design; it doesn't seem as useful as a "proper" open comb with longer, curved teeth. Either way, there's less "comb feel" than a real R41 so there's that.

An interesting thing I forgot to mention on Friday was that there are no lather slots in the .78mm base plate. A bit annoying, as it builds up lather on the head more quickly than the .38mm and far more than the .68/.95mm stainless and titanium razors.

The end result was a very, very close shave. Not quite BBS, but I chalk that up to being (perhaps overly) cautious having been burned on Friday, and not using a fresh blade. I'm of the opinion that aggressive razors work best with the freshest blades... Certainly the R41 is that way. I think I only ended up with one very minor weeper, though I still have some slight marks from Friday's shave. I'm afraid I won't be trying this razor again until next Monday... Where I'll use a fresh blade and the original bronze handle.

Other items of note are the lovely emerald green #ThatDarnRob brush with a 24mm BOSS knot, mixing up the vitals in the #GTP scuttle for a lovely, warm lather.

Such a dramatic turnaround from last Friday's shave today! I chalk it up to a few things. Expecting it to shave like one razor, rather than another which is a fair bit different. Using it like the razor I had been all week; a much milder, smoother and thus forgiving razor. The heavy weight of the stock, bronze handle. I don't even use the .95mm with a stainless steel handle. Once swapped to a more apples-to-apples titanium handle it was like night and day. So yeah - I changed my opinion of this razor from bad to (optimistically) good. But it's early yet. I can definitively say this will never be a daily driver for me, and unless you use an R41 daily, it won't be for you, either. It's more efficient than the .95mm but not nearly as smooth and effortless.