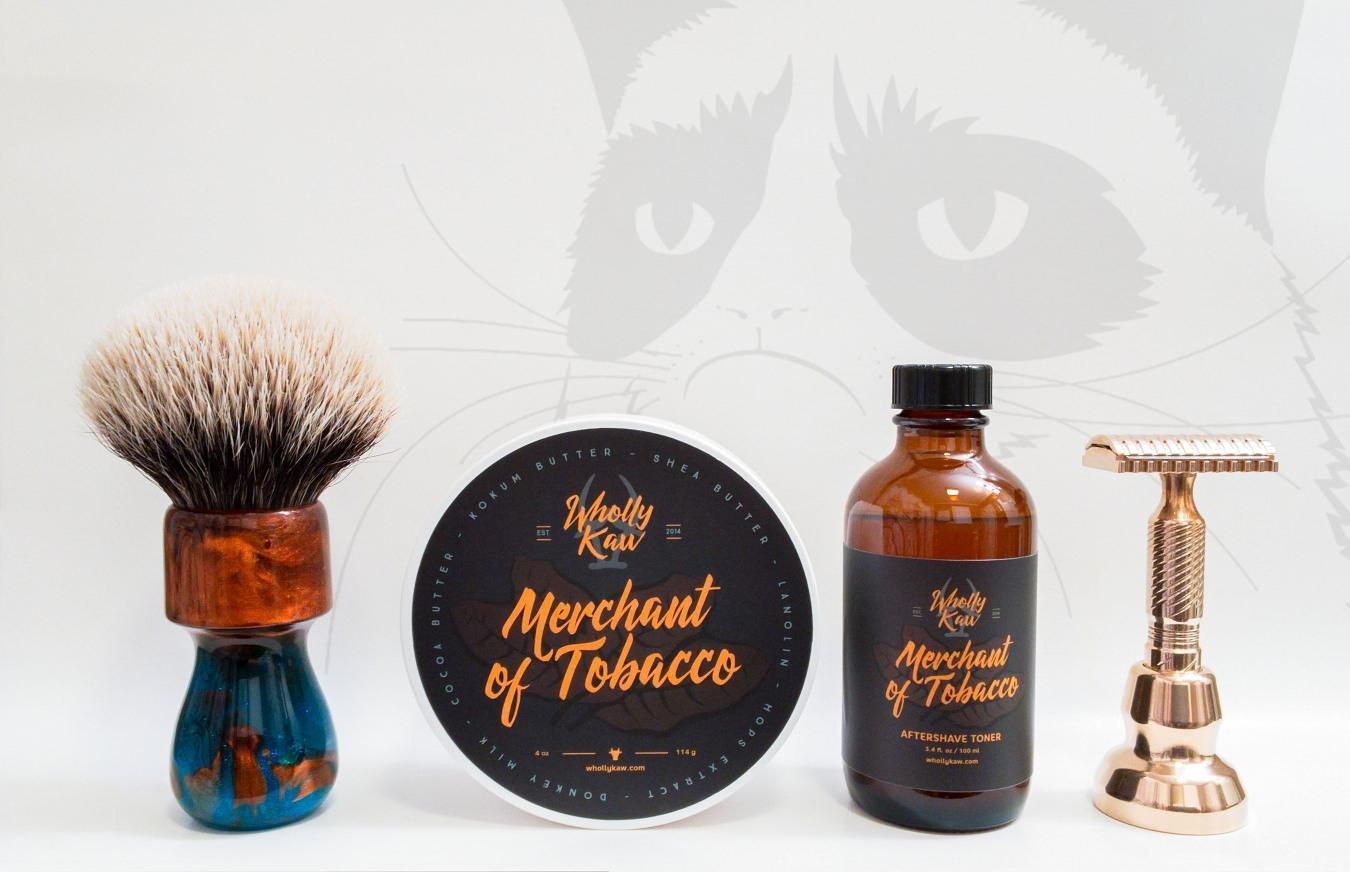 I've reviewed several of the latest "donkey milk" releases from #WhollyKaw (click the hashtag to browse them) as well as reviewed Merchant of Tobacco specifically, so I won't get into any of that today. I'm of the opinion that it's arguably among the best bases on the market right now. It's a fairly "hard" soap, so easy to load and drama-free, has excellent performance in terms of lather generation, cushion, both primary and residual slickness and finishes off with a great face feel. The balm is no slouch either, providing excellent healing and moisturizing properties without feeling tacky. The packaging is all the latest from Wholly Kaw, including new artwork on the new packaging, including an airless pump for the balm. Check out my review of Fougére Bouquet for more on the performance of both.

Today I'd like to focus on the hardware; specifically, the new bronze open comb base plate with a .78mm blade gap from #TimelessRazor. Replacing the base plate of the #TRBR38 (as I did) or getting the #razor complete as pictured - is known as the #TRBR78. Same material; that is, C954 bronze. The straight bar has been replaced by an open comb and the blade gap opened up from the prior .38mm gap (thus the naming convention, in case it wasn't obvious). When I heard the new gap dimension, my spidey sense was already tingling. That's an increase of .40mm and different razor design or not - that's a lot. Even the jump on the stainless steel and titanium razors isn't that large, and goes from .68mm to .95mm; a difference of only .27mm.

I had a lot of hope in this base plate, because as much as I like the original, it's just a touch too mild for my taste. But I was also a bit leery. While I like the .95mm razors, they can be a bit much at times, certainly as a daily driver. Timeless Razor suggested that this new plate would be "comparable to the .95mm" yet I hoped it was a bit tamer. Well, I can confirm - it's at least as aggressive as the .95mm - if not far, far beyond. Or at least, felt that way.

That sounds crazy you say - how did it shave? I used the same handle, top cap and #PolSilver blade from yesterday (now on shave four), swapping out only the base plate. The tl;dr version is that this thing is a meat grinder. Seriously, the shave was worse than a bag of dicks. I knew immediately that something was up on the first pass. It was relatively comfortable, but with a narrow window as far as shaving angle goes. Too shallow and you get the edges of the squared off comb. I don't know what they were thinking with this design. I already scored one weeper before starting the second pass. Now it was no longer comfortable but at least somewhat tolerable. The hesitation caused an uneven pass and more weepers sprang up. By the third pass I honestly didn't want to go over most of my face again... I manned up and got 'er done. For the most part. Frankly, I'm a bit shocked.

I never looked forward to balm as much as I did today. Half a dozen weepers, easy. A raw, irritated face. What the hell? This was not comparable to the .95, which I can get through a shave with even if it's not quite comfortable towards the end. This was not even comparable to a Mühle R41. Maybe in efficiency... I can feel a very, very close shave - in spots. The blade feel, combined with the odd comb made this a thoroughly unenjoyable shave. By the second pass I was already a little gun shy and certainly by the third pass, which made for a lot of missed spots (that I had to touch up afterwards with another razor).

Why Timeless Razor went for a .40mm blade gap jump is beyond me; but it's not surprising. The regular .68/.95mm razors are similarly too much in either direction - the .68mm is a bit too mild, the .95mm a bit too aggressive. With the new design of the bronze razors, the .38mm is too mild and this new .78mm is... Insane. Something in the middle of both extremes would be ideal, at least for me. That said, and knowing that the .95mm is decidedly a "Monday morning razor" for me - I'm going to give this one another shot on Monday after I have some growth (and my face heals!). To be honest, I'm not really looking forward to it... But to be fair, it has to be done.

Also worth mentioning, is the finish. The .38mm base plate is only polished in the visible spots (with the razor head assembled) but even the machine finished areas look better than on this .78mm. It's almost like it was a rush job to get these done and out the door. I have no doubt that I could do a bit of polishing myself with Nevr-Dull as I did a few days ago with the rest of the razor to clean it up a little, but...

The software was awesome (see my earlier review of Merchant of Tobacco) as was the custom #ThatDarnRob Pueblo brush rocking a 30mm Maggard Razors two-band badger knot. The #GTP scuttle too, did not disappoint.

Wow. What a horrendous shave today. Apparently I'm not alone in my thinking. Two other guys (that I know of, so far) had a similar experience. Esteemed colleague Gary "Wet Shaving Wetto" Hartzell likened it to "shaving with a paint scraper." I'm seriously questioning what was going on at Timeless Razor on this one. Like I said, I'll give it one more (reluctant) go on Monday to be sure... But this one's likely going back from whence it came. Even the .38mm, which is capable of some truly nice shaves when it hits; seems to fail miserably other times... It's too random. My love affair with these bronze beauties may be over.