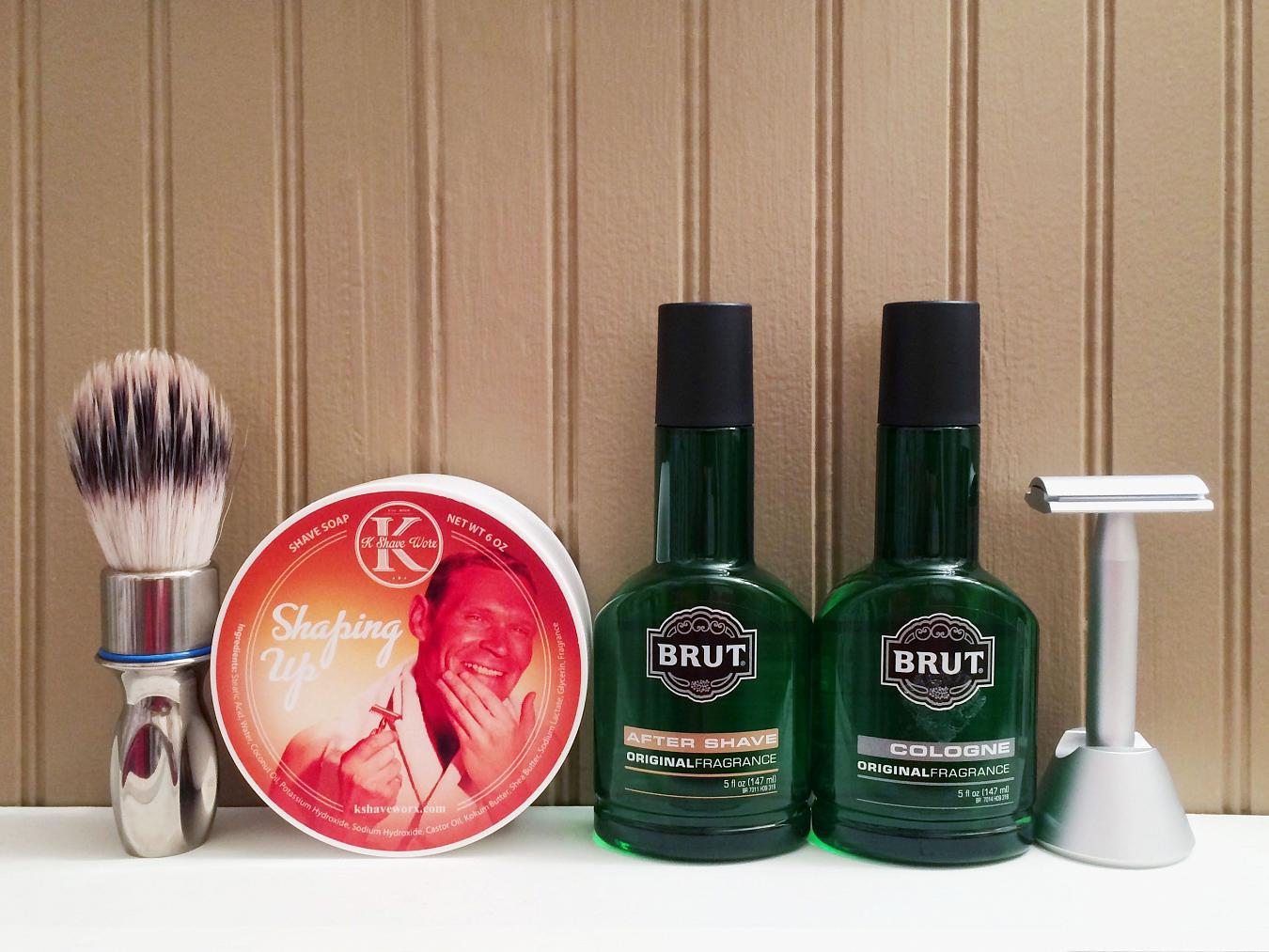 Forget "barbershop" - the Brut fragrance has been in a league of its own since its intro in 1964. K Shave Worx gives us the missing #soap (and #aftershave) in Shaping Up released last year.

My (Kelly) Dad requested a Brut scented soap so this is our take on that classic scent. Every morning when my Dad gets ready for the day and goes to shave he has always said "I'm going to shape up" so my nieces and nephew said we had to name this soap Shaping Up! When my nieces smelled it- they said it smells just like Grandpa Tony. I love the way a scent can trigger all sorts of memories and this soap makes me think of my Dad.

I've been wearing Brut basically forever - literally. I wore it as a teen in high school and it's been an on and off again affair ever since (mostly on). Brut Cologne was launched by the design house of Faberge Paris in 1964. In 1968, a cheaper version called Brut 33 was introduced, containing 33% of the fragrance - which Unilever acquired in 1989. Later in 2003, Idelle Labs (part of Helen of Troy Limited) acquired the rights to the brand in most major markets. Brut is a more classic fougére fragrance, having the key elements of lavender and oakmoss. While coumarin is also a key component, the tonka bean and vanilla are close analogs. It has top notes of lemon, bergamot, lavender, anise and basil; middle notes of geranium, jasmine and ylang-ylang; base notes of sandalwood, oakmoss, vetiver, patchouli, tonka bean and vanilla. To this day, the scent reminds of certain moments in time (as scents are the most active triggers of such memories).

When #KShaveWorx had announced its release last year for Black Friday, it immediately sent my spidey-sense tingling. I knew it was only a matter of time before I picked it up - and last week, I did. I didn't get the matching aftershave because, well, I have all the actual products (aftershave, cologne and deodorant). I love matching sets, but when it comes to clones I prefer as much of the real thing as possible. So let's talk about the scent... Does it work? The smell of Shaping Up is as close as you'll find anywhere to the real deal. I was very pleased with snuffing the tub, but lathering it just made it better. The shave had me grinning. Performance wise, the soap is very good - just click on this: #KShaveWorx hashtag for all the reviews I've done of it.

Hardware for today consisted of the #StandardRazors razor with a #PolSilver blade on shave two, with the ever popular #BSB Shaving Brush doing the needful in the #GTP scuttle. I like that K Shave Worx provides not only ample soap, but a good bit of what they call Bloom Room™ to load up without making a mess. It's really not that much; more gimmick, really. But it does help and is appreciated!

At last, I have the missing soap to my Brut #aftershave, #EdC and #deo products! I'm quite stoked to have a nice performing soap with a scent that's a dead ringer for the original. I look forward to a lot more shaves with this combination of products; it will certainly be among my group of defaults for when I can't or don't want to decide on anything. A go-to if you will. If you're a fan of Brut then definitely check out this offering!