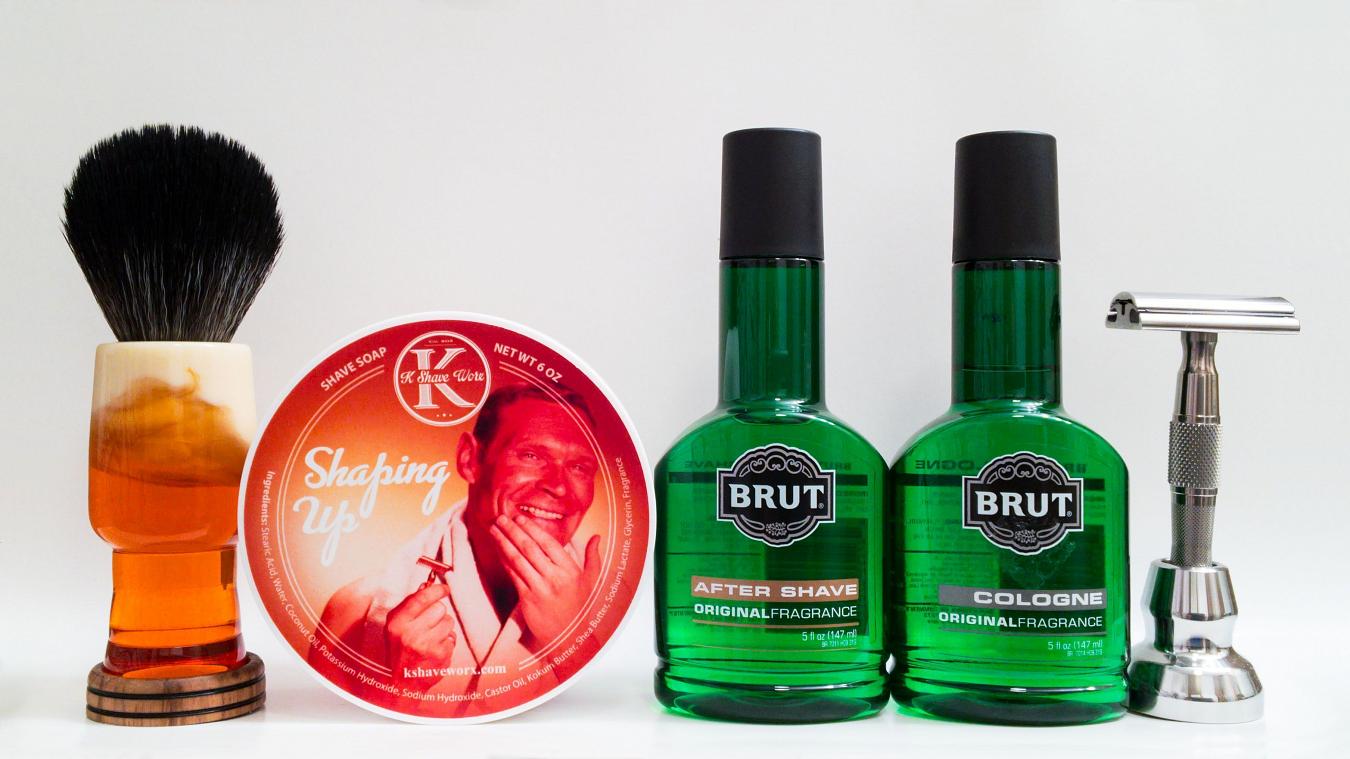 My (Kelly) Dad requested a Brut scented soap so this is our take on that classic scent. Every morning when my Dad gets ready for the day and goes to shave he has always said "I'm going to shape up" so my nieces and nephew said we had to name this soap Shaping Up! When my nieces smelled it- they said it smells just like Grandpa Tony. I love the way a scent can trigger all sorts of memories and this soap makes me think of my Dad.

I actually did a SOTD/review of this combo already... So I won't repeat that all here. Though I've added the (now standard) chart above, and I'll expand just a little on the aftershave performance.

Let's not kid anyone here. Brut is your standard OTC (Over The Counter) bug juice. It's dirt cheap, available in every drugstore and bodega, and won't impress anyone with its ingredients. But it's been around just about forever, now hasn't it? Partly because it's so inexpensive, partly because your dad and maybe even his dad used it and partly because the scent of Brut is seemingly timeless. I have to admit, I'm not so much about the cost, and my dad may have dabbled with it... But it was me who wore it since my wee young'un days (see the aforementioned review). It just never gets old.

The aftershave, though simple... Works well. It's your basic alcohol and water affair with a healthy dose of potent Brut scent and a hint of menthol. Like say, Murray & Lanman Florida Water cologne or Jeris Osage Rub that aren't meant to be aftershaves (but are often used as such), Brut isn't much different when it comes to the ingredients. In fact, take a look:

Yup, that's it. The magic is in the scent. To know it is to love it. And that's a good thing, because freshly applied, it's got some chutzpah. The sillage is potent but longevity is fairly average. Despite the simple ingredients, it does leave your skin feeling pretty nice. Not at all heavy, slightly "moisturized" and soft. You can thank the PG (propylene glycol) for that... Same stuff that's in asthma inhalers and vape juice, and if you've ever gotten the latter on your hands, you'll understand immediately the feel of it. The cologne is basically the same thing but with an even stronger scent.

Hardware came down to the #TimelessRazor "mild edition" sporting a #Stork handle and a #PolSilver blade on shave three. The #ThatDarnRob brush was a natural choice, matching the coloring of the #KShaveWorx label... I'm fresh out of toxic green zombie brushes. The #GTP scuttle, as per usual, did its thing with aplomb.

I love Brut. It brings back memories and is honestly a pretty fine scent. There's a reason it's been around so long - and so popular. While the actual performance isn't quite all that in this day and age of artisanal offerings, the scent is the star of the show. When K Shave Worx released their Shaping Up I was just giddy and had to have it. Sure, others have made their own Brut clones... But I'm a happy K Shave Worx customer and was pleased to give them my business. The performance is quite nice and an exceptional value and I'm happy to support Kevin and Kelly.