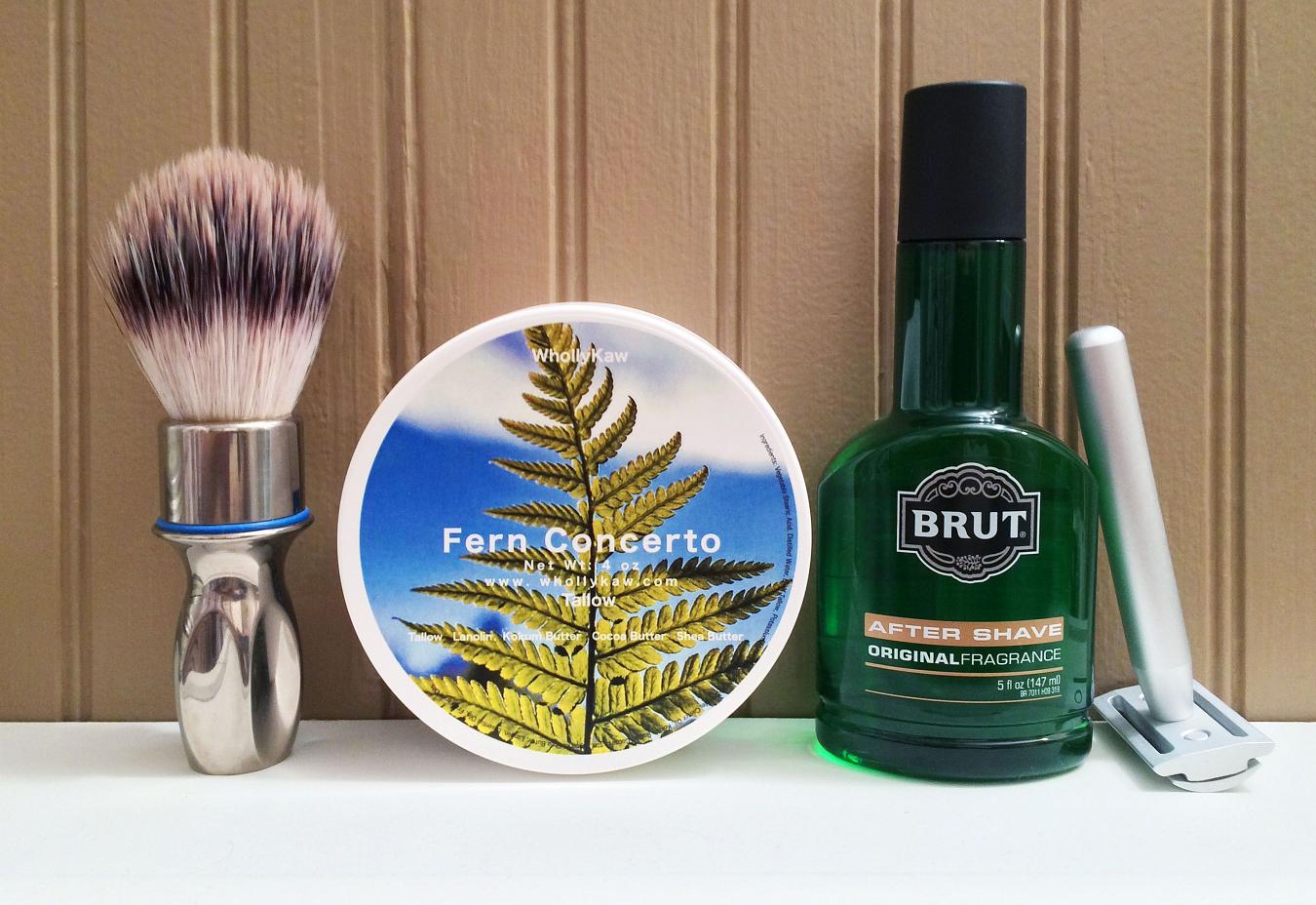 It's all about Brut-ish green fougéres in this SOTD, thanks to Wholly Kaw Fern Concerto #soap followed up by the real deal; Brut #aftershave, #EdC and #deo!

First, let's talk about the scents themselves. Fern Concerto is, as its name implies, a (modern) fougére scent. It has top notes of bergamot, lemon, basil, cumin and fruit; middle notes of jasmine, patchouli, carnation, coriander, orris root and sandalwood; base notes of oakmoss, amber and musk. The scent strength is a medium, maybe a bit more. As a fan of green and fougére scents, it's intoxicating to smell and surprisingly complex. The top is unmistakably citrus with the spicy, nutty aroma of cumin which is supported by other green, earthy notes and florals. The base is warm and woodsy. When I first smelled it, I though, "this seems somehow familiar..." Though indirectly, the first thing I though of, was Brut. While unique unto itself, it shares a similar profile. It seems like it might have been inspired by Brut (but actually wasn't). Such is the nature of fougéres.

Brut Cologne was launched by the design house of Faberge Paris in 1964. In 1968, a cheaper version called Brut 33 was introduced, containing 33% of the fragrance - which Unilever acquired in 1989. Later in 2003, Idelle Labs (part of Helen of Troy Limited) acquired the rights to the brand in most major markets. Brut is a more classic fougére fragrance, having the key elements of lavender and oakmoss. While coumarin is also a key component, the tonka bean and vanilla are close analogs. It has top notes of lemon, bergamot, lavender, anise and basil; middle notes of geranium, jasmine and ylang-ylang; base notes of sandalwood, oakmoss, vetiver, patchouli, tonka bean and vanilla. I'm a big fan, and have been, dating back to my early teenage years. To this day, the scent reminds of certain moments in time (as scents are the most active triggers of such memories). Much like Fern Concerto it opens with a green citrus accord, spiced here by anise instead of cumin. The middle here too is floral just as the base is warm and woodsy - with a little help from the vanillic tonka bean and vanilla itself.

Performance is quite similar to my experience with Washington's Blend soap, which like this one - is a tallow base. Loading was easy and it started producing lather almost straight away. Transferred into the scuttle and further massaged, it produced fairly dense and creamy lather with excellent glide and very good secondary lubricity. There was plenty of cushion and just as much glide; I was able to make touch-ups as-needed without any lather present. Once dialed in, the lather has a nice, wet looking sheen to it. The post-shave face feel is equally enjoyable, as the soap has some choice ingredients:

Knowing that the inexpensive, mass-produced Brut aftershave doesn't have a lot in the way of face feel goodies - the soap had to carry it today - and did. My skin is feeling fairly moisturized and soft. The packaging is simple; a mid-weight white tub with top-facing label and one on the side (great for those that stack their tubs). It didn't strike me a professional-level effort (as far as branding and design) however - I actually prefer the older style. It was simpler, cleaner and more consistent. Coming in at $18.99 for a 4oz. tub, it's a good value performance-wise but I think it may be more in line at $17.99 (the price of the vegan formula). I think with minor improvements to the label and tub (which are currently under way) that price would be more justified. Similar offerings from CRSW and B&M are $17 for comparison, and maintain the edge overall. Either way, the performance is quite good.

Hardware today consisted of the "raw" colored aluminum #StandardRazors razor with a #PolSilver blade on its fifth and last shave, the #BSB Shaving Brush doing its thing while the #GTP scuttle kept the lather nice and warm throughout the shave. A nice, close shave today; typical of the combo. Fairly easy to achieve a BBS- on most days, and a BBS on Mondays (having some growth).

All in all, a very good scent match, Fern Concerto and Brut - as I didn't have the matching aftershave from Wholly Kaw to go with. Plus it was interesting to compare them side-by-side. Performance of the soap is surprisingly good, and as I've said before - I think #WhollyKaw is rather underrated. If you find a scent that's intriguing, go for it - the soap will not disappoint. I think with a few adjustments to the packaging/presentation, which should be done by the end of the month - they should be a serious player in the market.