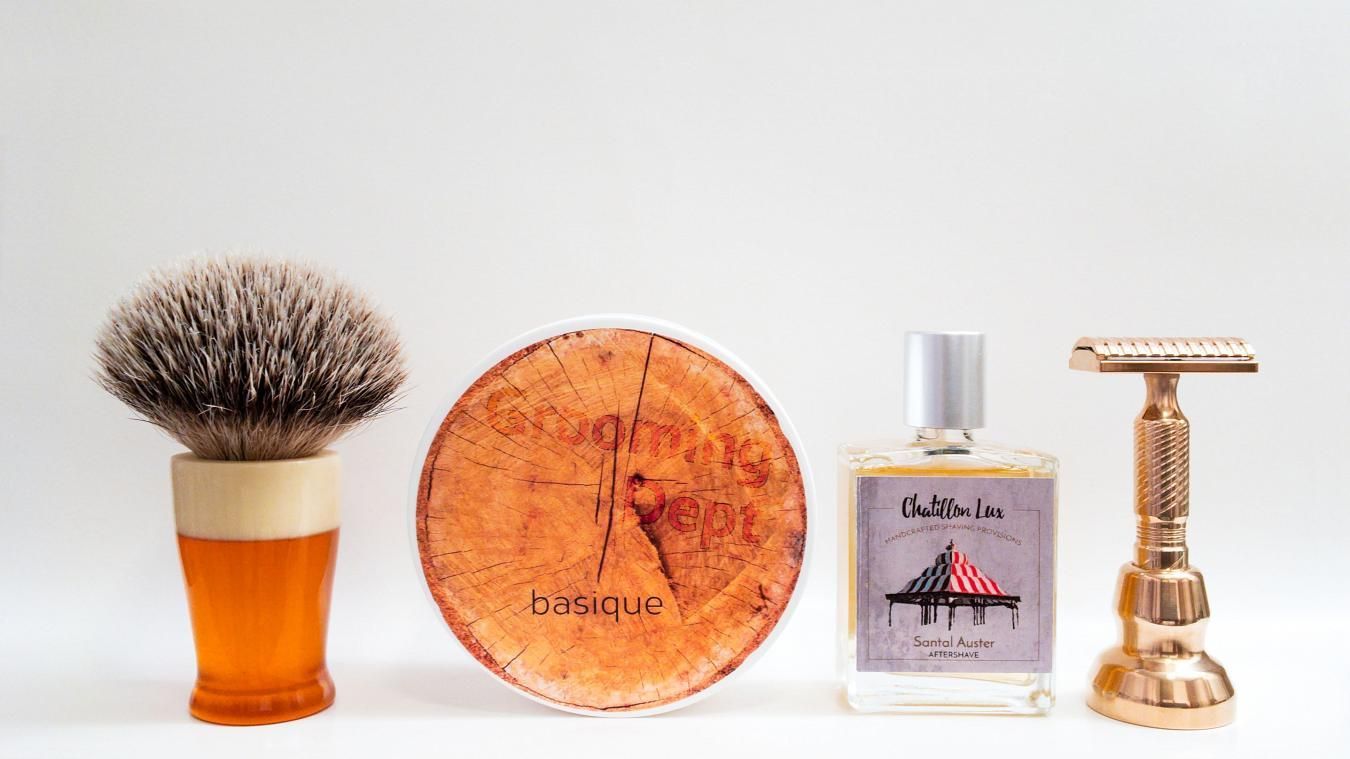 Just a quick note here on the charts above... I rated the #GroomingDept soap under the Value and Lather sections and the #ChatillonLux aftershave under Post-shave and Scent.

The smell of sweet fresh sawdust!

First, an explanation is in order, as the artisan's offerings are confusing and constantly in flux. The soap reviewed today from Grooming Dept is a vegan formula, which saw some reformulation over the summer. It is one of three "regular" bases offered; the other two being tallow and duck fat. Occasionally, fats may be swapped out - for example, lamb tallow (most recently in Angel) for a limited run. While I applaud the artisan's need to experiment and tinker, I might suggest they stick with the three lines as they are now and stabilize. Having things constantly changing makes you feel like a beta tester. Personally, I won't be a customer until such time.

The packaging consists of a nice, all-white plastic tub. The artwork has definitely improved since the early days (which weren't all that long ago) and is quite nice now. That said, I'd like to see the branding improve, which is currently as random as the formulations. Other than a label on the top of the tub, and occasionally one inside under the top, there's nothing else. The artisan's name and even product name is hard, if not impossible to see - or absent altogether (e.g. Mallard and Conca d’Oro). There are no ingredients, weight, UPC code or anything else visible either. In the case of Basique today, at least the artisan and product names are relatively legible on the label.

The official scent notes include vetiver, amyris, patchouli, amber, sandalwood, "wood accord" and Cashmeran. The artisan suggests, "If you like Comme des Garcons Wonderwood then you'll be delighted by this scent." Wonderwood by Comme des Garcons is a woody fragrance for men introduced in 2010 - and features notes of Madagascan pepper, bergamot, Somalian incense, nutmeg, Cristalon, Cashmeran, gaïac wood, cedarwood, carvi graines (fennel), Javanol, sandalwood, vetiver and oud (agarwood). Comparing the two, there are some obvious similarities, though the latter is more complex, adding spices, bitter orange and incense. There are also several synthetic compounds, one of which is Cashmeran and shared between the two.

The scent of Basique is overall rather warm, earthy and woodsy with an underlying muskiness. Much emphasis on woodsy; it sports amyris (a form of sandalwood) and sandalwood (a different variety) and a nebulous "wood accord." The vetiver gives it a bit of a grassy, green nose. The amber warms things up a bit and with the patchouli, which adds plenty of earthiness - both tie in well with the Cashmeran. What is that, you might ask? It's a tenacious, musky, ambery wood scent. While it's a bit vague by itself, when framed with the other notes, it ties them all together. All in all, it's a lovely accord - woodsy scent fans should be quite pleased; I know I am.

While Grooming Dept was criticized early on for "weak scents" this was corrected over the summer... Some of the essential oils didn't play well with the chemistry, which was changed at that time. With Basique that's certainly no longer a concern as the scent strength of the soap is strong. The Cashmeran surely helps as well. I wish more artisans would offer such strongly scented wares. I went with the prevailing wisdom of loading for a full minute (I usually do 30s) and adding a lot of water. Not because of the heavy soap load (it ended up being fairly standard, as it's a harder soap) but because of the ingredients - they just love water.

Now for the performance... The resulting lather was thick and creamy, with excellent cushion and both primary and secondary lubricity. It had a nice, glossy sheen. Easily in the top tier, including current stars such as Wholly Kaw donkey milk soaps, Tallow + Steel and Declaration Grooming. Definitely most impressive. I'd have to agree with some other assessments that you'd be hard-pressed to pin this as a vegan formulation. Considering the ingredients:

...It should probably come as no surprise that the resulting face feel was also excellent. That's literally a ton of ingredients for a shaving soap - many of which are skin foods. I surely could have gotten away without a post-shave product (but that's not how I roll). The only downsides, in my opinion - is the need to both load and hydrate heavily, working the lather for a good while, for optimal results. The other top tier soaps mentioned earlier both load and lather more easily. But, this was a first go with this artisan, and this specific formula... I suspect with continued use and dialing it in, things will improve further.

I won't comment on the post-shave today, as I've extensively reviewed Santal Auster by Chatillon Lux previously. Definitely check that out if you're unfamiliar. I will add a note that the segue from the Basique accord to Santal Auster is perfect, and they pair very well together. You could think of the former as the missing soap to go with the latter; sandalwood is featured heavily in both.

Hardware for today consisted of the #TimelessRazor #TRBR38 bronze razor fit with a #PolSilver blade while the #ThatDarnRob "Beer" brush had it's way with the lather. Sporting a 22mm silvertip badger knot (which is rather more like a 24mm), it was a real treat. The brush is still breaking in, but it's both blooming and softening up very nicely. At any rate, it's very apropos for a Friday, no? The #GTP scuttle did its usual standup job in keeping the lather contained and warm.

I have to say, this was a fantastic shave! The soap performed extremely well in all regards. To sum up some suggestions above, I'd say stick with the current formulas for a while. Work with someone on branding and develop a consistent, professional labeling scheme that clearly shows the brand and product names as well as the base (at a minimum). This is important; the soap is being very well received (myself included) and I'd like to see it compete in the top tier, where it belongs. I'm looking forward to seeing the line rounded out by aftershaves in January as well, which is the last piece of the puzzle (IMO).

Very nice review. I have been testing the new beef tallow soaps that were released yesterday. There is no question in my mind at all that GroomingDept makes the finest soaps on the market. Sri and his Wholly Kaw donkey soaps are right there too. The changes in Formula since the May 15th launch were necessary to get where GD is today. Having tested all of them it’s a clear evolution towards excellence. I’ve tried over 100 soaps including most all artisans mentioned and GroomingDept (and Wholly Kaw) are in a totally different league than anything else made today.

Thanks! Yup, they’re all top tier.