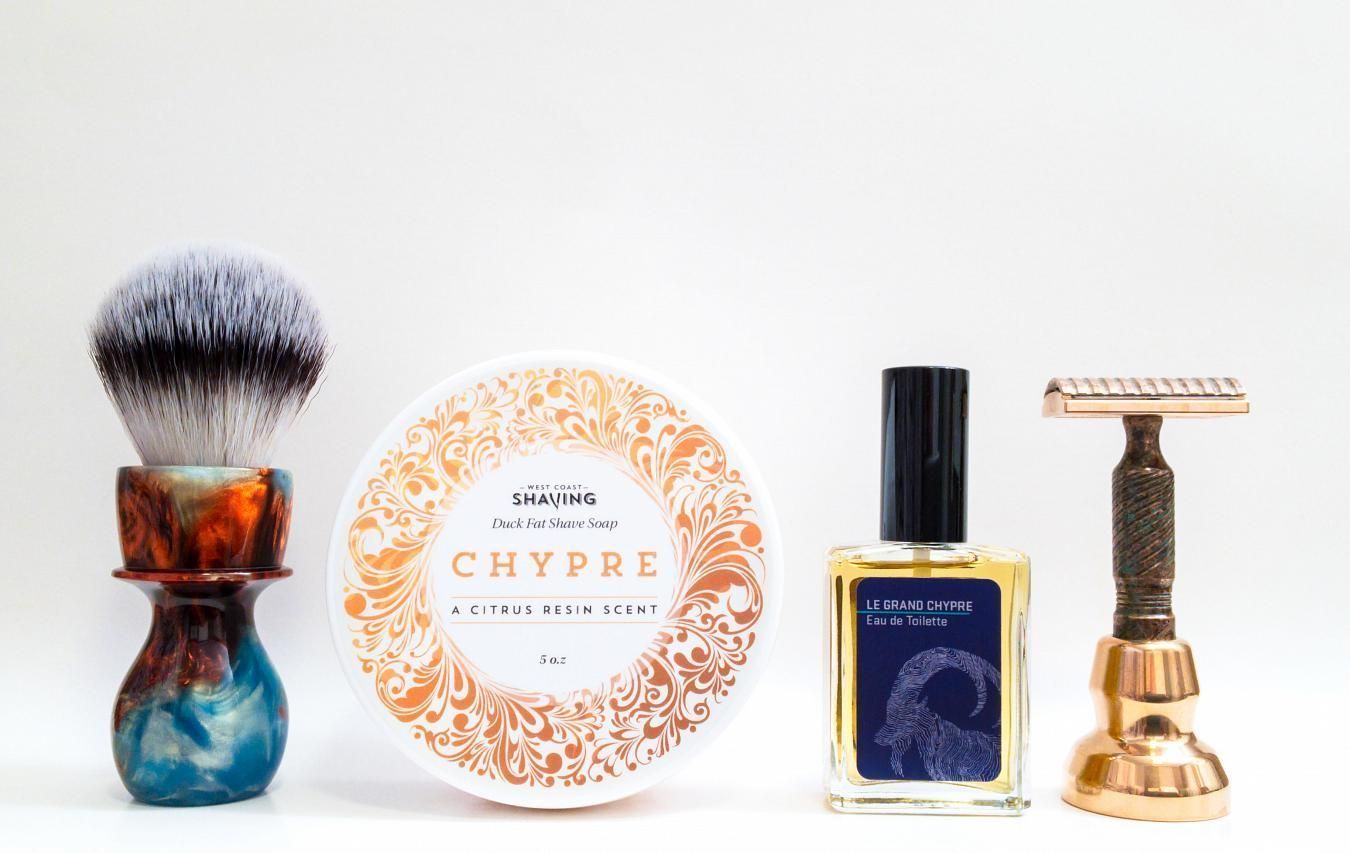 Checking out the new #soap line with Chypre by West Coast Shaving (via Oleo Soapworks) and Barrister and Mann Le Grand Chypre #aftershave and #EdT!

In 1917, François Coty put this new category of perfume on the map with his aptly named, Chypre perfume. This perfume classification takes notes often found in the eastern Mediterranean island of Cyprus (Chypre is the French name for the island). The traditionally sharp scent usually boasts citrus top notes, middle notes of labdanum, on a base of earthy moss. Our West Coast Shaving take on this traditional aroma has notes of lemon and lime accenting the bergamot, which creates an effervescent opening. The supporting aldehydes & florals of the heart notes contrast with the earthy, resinous base of cardamom, oakmoss, vetiver, patchouli, and musk. This evokes the citrus-scented breezes just kissing your face as you sit on your tree-shaded, moss-lined balcony overlooking the Mediterranean.

This soap is part of a new line of soaps, creams and aftershaves discussed a while back in West Coast Shaving Introducing New Soap Line. In particular, the soaps are courtesy of #OleoSoapworks and distributed by #WCShaving. You may recall my in-depth review of Pear-brrr Shoppe cream back in mid-August. A shipping snafu delayed the soap reviews, so apologies for that. Check out my prior in-depth review of Oriental for more info on the soaps; which I won't repeat today. Since I didn't have any matching aftershave or scent, I went with none other than Le Grand Chypre by Barrister and Mann.

Performance wise, there's not much to say - those familiar with the duck fat base by Oleo Soapworks know that it's great stuff. It's not quite top tier (but not far from it, either) that performs well above its price point. Especially with the pre-launch pricing of $17.98 but even at the regular $19.98 (the cream, by comparison, is $14.38 pre-launch and $17.98 regularly). Other than ultimate skin feel, there's not much to complain about. The lather is abundant and creamy with excellent primary and secondary lubrication. Let's take a quick look at the ingredients:

Described simply as "a citrus resin scent" on the label, it doesn't quite do the fragrance justice. The scent of Chypre has top notes of lemon, lime and bergamot; middle notes of aldehydes and florals and base notes of cardamom, oakmoss, vetiver, patchouli, and musk. A slight departure from the "classic" chypre fragrance - but mostly due to the lack of labdanum in the middle (which is potent, tenacious and has a sweet balsamic aroma with a faint herbaceous background and a persistent ambergris-like undertone). It's essentially less "green" and more floral in the middle... Serving to brighten the entire fragrance a bit. The classic citrusy top and earthy, green, musky base are well represented, however.

Smelling Chypre from the tub, while not ideal (as compared to say, an aftershave) - immediately reminds of a chypre fragrance... A common theme in many Italian or French scents - a citrus open - quickly reveals the sharper, spicier notes in the background such as cardamom (or frankincense, cedar and cinnamon in Le Grand Chypre below). There's no hiding them as they build towards the base, almost overshadowing the middle, with its lighter, floral peak here. The scent strength is a lower medium in the tub and lathered, and reflected in the chart above; longevity notwithstanding.

Le Grand Chypre by #BarristerMann is a spicier, "greener" and somewhat danker chypre with similar notes of bergamot, lime, labdanum, oakmoss, patchouli, rose, frankincense, Persicol (a peach scented aldehyde), cedar, cinnamon, various musks and other perfume compounds. Whew. It's a heady, complex scent. A bit truer to a "classic" chypre and slightly more complex than Chypre is, but not altogether different, either. The scent strength of the aftershave (not pictured) is a strong medium while the EdT, perhaps not surprisingly - is strong. Longevity is about average with the aftershave, but the EdT extends that big time - 8+ hours.

To differentiate them in a simple way, think of Chypre as a flower-height scent, while Le Grand Chypre is much closer to the ground. Both obviously derive their profiles from - and represent perfectly - a chypre style fragrance (a shame it's not more popular). Their difference(s) are subtle and while each is unique unto itself, they work well with each other, as they should... Like your head passing through a layer of flowers in a field before finally resting your head upon the earth to gaze at the clouds above.

Hardware for today includes the #TimelessRazor #TRBR38 with a #PolSilver blade on shave five, the debut of a #ThatDarnRob brush called Blaze with a (new to me) 26mm Silver Fox knot. It looks closer to a real badger knot than just about any other synthetic knot, barring perhaps the Mühle Silvertip Fibre knots - which is sort of the point. It's got a good backbone, moderate splay. Fairly soft tips. I'll have to use it more to really get a sense of where it fits in, but it's a nice knot. The #GTP scuttle did its thing, as per usual.

#WCShaving has a great set of fragrances in this new line up and it's hard to argue the performance of the Oleo Soapworks base. Chypre is a nice take on a chypre style fragrance; you totally get that vibe but it's a bit brighter overall. Chypre is a great scent and I look forward to using it again, hopefully with the matching aftershave next time!