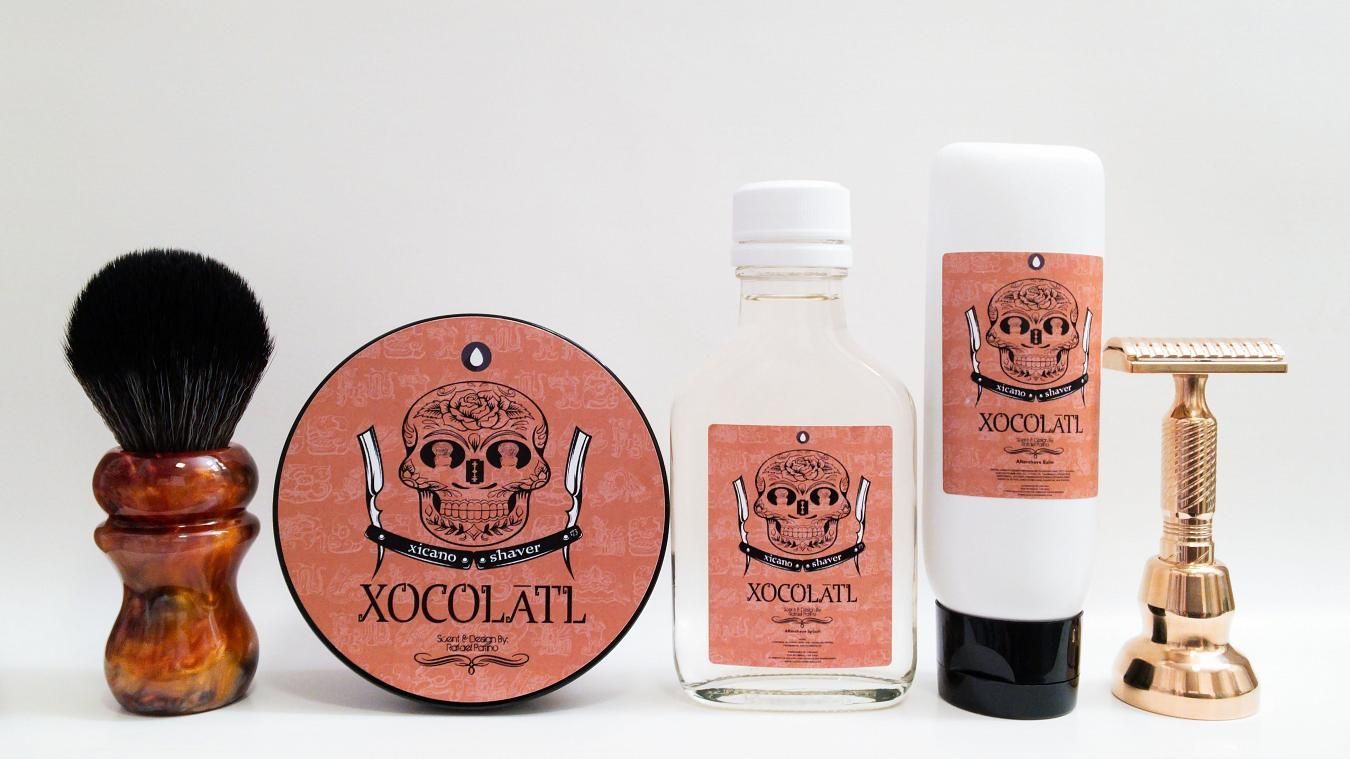 If you're a fan of chocolate (with a side of Mexican spices) look no further than Xocolātl by Oleo Soapworks in this Limited Edition release in a #soap, #balm and #aftershave trifecta!

Spiced dark Mexican chocolate with hints of cardamom and cilantro.

Xocolātl by Oleo Soapworks was originally a Special Edition consisting of 20 individually numbered tubs (in trifectas) but due to the popularity, it was re-released on a pre-order model starting October 27, 2017 (which began shipping on November 11). The set you see here was part of the latter Limited Edition release. The packaging is fairly average, from the soap tub to the balm tube and aftershave bottle. The labels as well, though the artwork of this release is particularly cool and well above average for the brand in general.

Oleo Soapworks is small artisan based in Chicago, which is owned and operated by Vida Perez-Velazquez. Debuting in February 2016, they've become ever more popular. Besides making the products for Oleo Soapworks they also produce the bases for a couple of other artisans (e.g. "What is Ariana & Evans?") and even take custom requests (with a minimum quantity required as of September 11, 2017). Today's software "trifecta" of soap, balm and aftershave named Xocolātl was inspired by a gentleman by the name of Rafael Patiño (a.k.a. chicano_shaver), who was also responsible for the artwork. He, with the help of Vida, arrived at the scent...

Xocolātl is an amazing (yet simple) scent - officially described as having notes of spiced dark Mexican chocolate, cardamom and cilantro. Indeed, as you may have guessed from the name, this is a serious chocolate bomb. It smells like a like deep, rich and slightly bitter/dark cocoa up front, in the middle and throughout. There's no getting around it! With more subtle supporting notes of cardamom and cilantro, adding depth and spice as undertones. This scent is wildly intoxicating. It's easily a strong scent strength out of the soap tub, which mellows a bit when lathered to a robust medium. The balm and aftershave are a bit mellower, and also robust mediums. The sillage at first is quite impressive but mellows quickly with longevity of only a few hours. While a simple accord, it smells amazing - so I gave the Scent-Quality rating above a nudge.

A brief note on the scent; the second release uses real cocoa powder and is much more chocolate forward over the more green first release.

Let's take a look at the ingredients of the various products... First, the soap, followed by the balm and then the aftershave:

The soap is a deceptively simple formula, but has some very nice ingredients which include shea and kokum butter as skin food, coconut, castor and jojoba oils and glycerin. It loads and lathers easily, producing an abundant amount of creamy lather with excellent primary and very good residual slickness. The face feel is quite nice as well. The typical price of the soaps are $16, but this Limited Edition came in at $20. I'd say it easily performs at this (lower) price point and represents a solid value. I've used similar soaps in this price range (both plus and minus) that didn't perform as well. This particular soap is a rich, medium brown color... It looks like mousse in the tub and lathers to a very light brown.

The balm also works very well and a little goes a long way. This is what I rated in the Post-shave chart above. Interestingly, one of the main ingredients, behentrimonium methosulfate - is synthetically created from modified rapeseed oil and most often found in products like hair shampoo and conditioner (among others) and lends a slippery feel to these products (not to mention detangling hair). It's the mildest form of such a conditioner and doesn't cause a build-up as it actually penetrates the hair. At any rate, an interesting ingredient for a balm. Cetyl alcohol is used in the cosmetic industry as an opacifier in shampoos, or as an emollient, emulsifier or thickening agent in the manufacture of skin creams and lotions. Butylene glycol is another emulsifier. Jojoba oil, panthenol, glycerin, caprylyl glycol, allantoin and silk protein are various skin foods, providing hydration and healing effects. Phenoxyethanol is a stabilizer and a preservative (as is the sorbic acid). The balms generally list for $14 whereas the Xocolātl went for $10. That's just $.50 over the unscented balm - given the performance, it is an excellent value.

Finally, there's the aftershave. It's an alcohol based aftershave with a simple formula; in fact the other ingredients are basically water and fragrance along with some polysorbate-20. Polysorbate-20 is used in cosmetics and skin care products as a surfactant, emulsifier, and fragrance ingredient. It can serve as a dispersing agent and mix oil and water, work as a fragrance solubilizer and stabilizer, act as a lubricator, and have a soothing effect on the skin. Sort of a jack of all trades. But don't expect too much in terms of healing or moisturizing from this aftershave, where it performs on a mediocre level. It's all about the alcohol and scent. Xocolātl aftershave went for $13 whereas the average is $11. While simple in formula, the aftershave represents excellent value. Consider Fine Accoutrements which is similarly simple - yet retails for $20. Even before the price jump (from $15) I considered it overpriced. As with the other aftershaves, menthol is a no-cost option during ordering.

All around, given the prices for each of the products and their respective performance, the value is excellent. The scent of Xocolātl is of course the killer feature here, and it smells awesome. I'd definitely recommend giving #oleosoapworks a go if a scent suits your fancy. The soap is quite nice and the two respective post-shave products work as billed. Though keep in mind that if healing and moisturizing are your goals, you'll want the balm - whereas the aftershave is a more simplistic alcohol (and optional menthol) splash bearing the scent.

Hardware for today included the #TimelessRazor #TRBR38 bronze razor with a #PolSilver blade on shave four. The #WildWestBrushworks Fall Leaves brush with its 24mm BOSS knot handled loading and lathering in the #GTP scuttle for a nice, smooth shave after several days growth.

I went in for the scent, and Xocolātl definitely delivers - but I'm staying for the performance and value. This surely won't be my last product from Oleo Soapworks. Given the price/performance ratio, this is some fine software here, folks. I'd say the pricing is between K Shave Worx and Mickey Lee Soapworks yet performs better than both. The aftershave specifically, is just as good (better, actually) as Fine Accoutrements at a much more reasonable price. Well done.