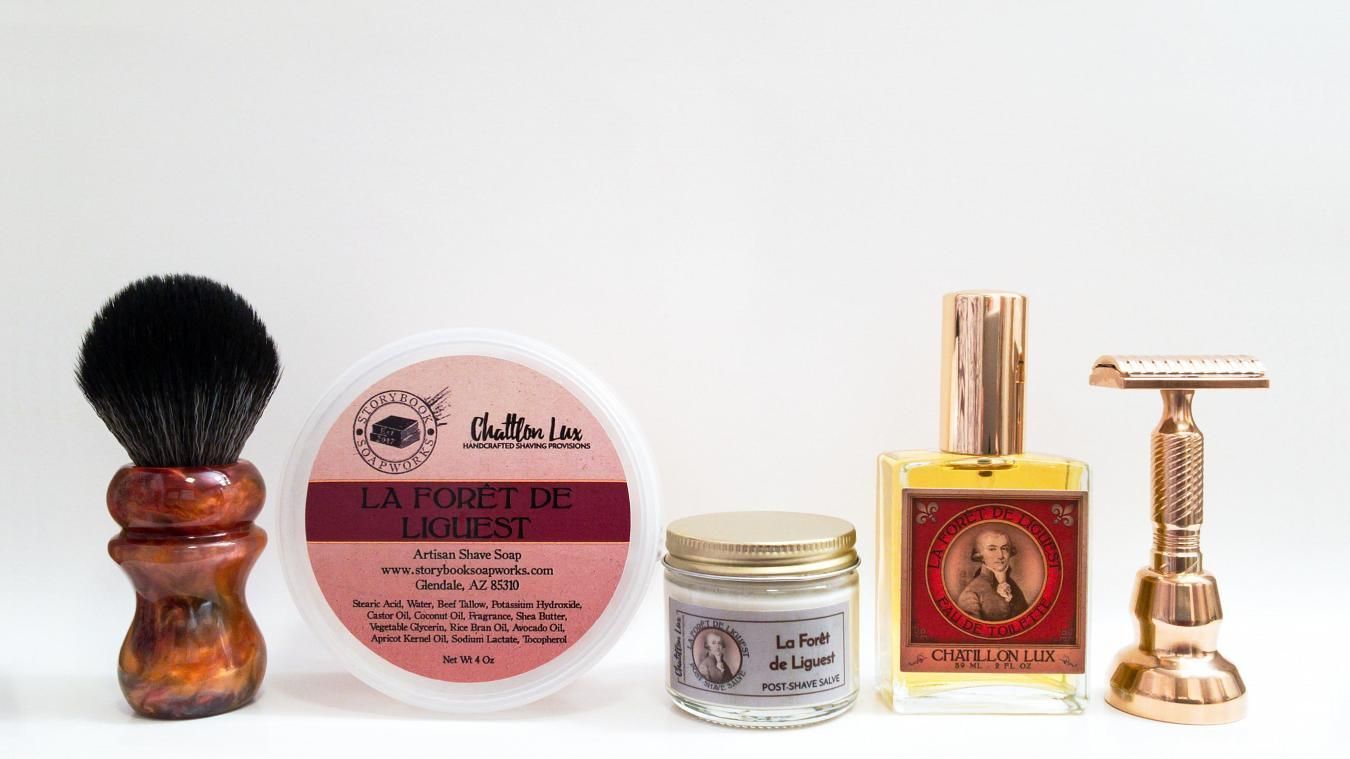 A righteous birthday shave with the latest from Chatillon Lux by the name of La Forêt de Liguest in a #balm (salve) and #EdT - with a matching #soap by Storybook Soapworks!

La Forêt de Liguest is a dark, rich scent that smells reminiscent of fougère based in the deep, deep forest, with notes of cypress and florals complementing the woods and undergrowth. It was inspired by the vision that the co-founder of Saint Louis, Pierre Laclede Liguest, had when he arrived at the fateful bend in the Mississippi River that would become Chatillon Lux's muse. Walking through the forests that populated the rugged terrain, he could see a city taking shape amidst the rolling hills and flowing tributaries.

As I mentioned in my in-depth review of Coffee Spoons earlier this week... New to the den is an up-and-coming artisan out of San Diego, CA by the name of Storybook Soapworks which is run by a guy named Lauren Reed. What started as a soft launch on Reddit back in the spring of 2017 is progressing quite nicely. The first product, Elysium was often sold out on the site. Two Limited Edition releases followed over the summer by the name of Shaken and Hook. Most recently, a collaboration with Chatillon Lux slipped out and later announced formally, for the Le Foret de Liguest fragrance. Alongside this release on November 4, 2017 was Coffee Spoons and Visions & Revisions. It is La Forêt de Liguest you see here today.

I won't get into the details of #StorybookSoapworks or #ChatillonLux - I covered the former extensively and by now you should know all about the latter. I will say that I have a surprise for fans of Chatillon Lux coming... Brief recap on Storybook Soapworks performance - it's packaged like L&L Grooming soap (with the same tub and prior generation labels) and has similar, but not quite the same level of performance. I still give the edge to L&L Grooming in terms of slickness and face feel, but it is close. I will say that it's easier to load (not being so soft and gooey) and generates a lot of thick, creamy lather. Load a bit less with these soaps. A real nice performer. Likewise, excellent performance by anything from Chatillon Lux. Let's focus on the scent.

La Forêt de Liguest is actually not a new scent. This was one of their first scents, and after taking a year off, was brought back on November 4, 2017. It will be available through the end of the year. It's "a modified fougère that is darker and richer than TSM Fougère with cypress and rose highlighting this distinctive scent inspired by the woods that one of the founders of Saint Louis, Pierre Laclede Liguest envisioned would one day become St. Louis."

The official notes are cypress, juniper, coriander, atlas cedar, rose, tuberose, geranium, bergamot, vanilla, vetiver, benzoin, cedarwood, patchouli, musk, oakmoss and grapefruit! This is a really complex, layered scent. In fact, it's a bit hard to pick out all the notes. On open, I get the cypress, juniper and coriander with a hint of atlas cedar and grapefruit. Underlying the top and blossoming (pardon the pun) in the middle are the floral notes of rose, tuberose and geranium but they're not overly sweet and floral - as they're tempered by the bitter orange bergamot. The rose particularly peaks here. The base, which comes on after a stretch, warms up the grassy, woodsy vetiver and cedarwood with vanilla and benzoin before finally settling down into patchouli and musk primarily - with a bit of oakmoss to keep it green.

The comparison to TSM Fougère is fair, and it is a bit "darker" (less floral and bright). It also strikes me as a more upscale and "fancy" scent. Truly a beautiful accord. It's nice to see it given the EdT treatment finally, and have a matching soap. I suspect I'll be breaking this combo out frequently. Between Chatillon Lux making the scents and wonderful matching soaps by Tallow + Steel, Wholly Kaw, Storybook Soapworks and especially L&L Grooming it's just a fantastic time to be shaving. These aren't simple, pedestrian or kitschy fragrances and soaps by a long shot. This is all upscale, top tier stuff.

Scent strength of the soap in the tub is a slightly lighter medium, which remains so when lathered. The salve (and aftershave toner, not used today or pictured) is similar. Scent strength is strong in the EdT with moderate sillage and excellent longevity of 6+ hours.

Hardware for today included the #TimelessRazor #TRBR38 bronze razor with a #PolSilver blade on shave three. I couldn't resist using the #WildWestBrushworks Fall Leaves brush with its 24mm BOSS knot... The colors just match the razor and software packaging perfectly - not to mention the razor, which was really the inspiration for it. It made quick work of loading and lathering this insane lather quickly in the #GTP scuttle.

You can't go wrong with Chatillon Lux and the soap from Storybook Soapworks truly impresses. The hardware is also just fantastic. While I've come to terms with the less efficient than I'd like shave of the TRBR38 I find that it gives a nice, smooth shave nonetheless... And really, it's something to behold. Great shave, gents. I'd wholeheartedly recommend everything you see here.