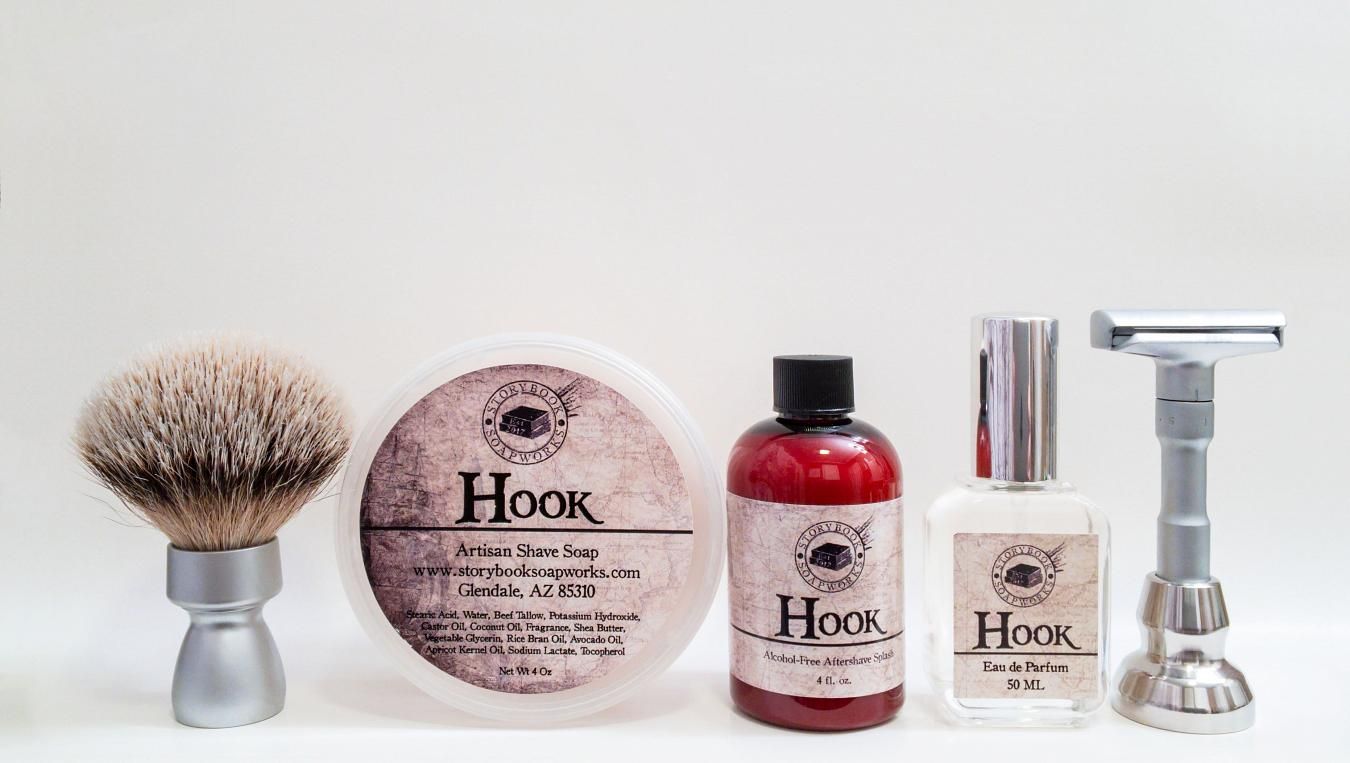 Arrrgh, we be sailin' back out to pillage and loot after a we bit o' shore leave with Storybook Soapworks Hook #soap and #aftershave with a matching #EdP finish!

Hook is built upon an accord of Cedarwood, French oak, gunpowder, leather, and sandalwood. Notes of ocean spray, crocodile tears, rum, and just a little spark of madness build upon this blend to offer a scent that is perfect for anyone who has ever wanted to sail the high seas.

In the not too distant past, I checked out other offerings by #StorybookSoapworks including this review of Coffee Spoons and this review of La Forêt de Liguest (the latter a collaboration with Chatillon Lux). I won't get into the background of the artisan or the performance much today, then. Do check out those reviews for that information. Suffice to say that the soap performance is excellent.

Hook was actually a Limited Edition released over the summer of 2017, but was re-released on December 14, 2017 (along with Shaken) - both with a new and matching EdP due to popular demand. Having tried the other two releases mentioned above, and considering some of the hype around the scent of Hook it only made sense to check it out. Officially, it has notes of cedarwood, French oak, gunpowder, leather and sandalwood - as well as "ocean spray, crocodile tears and rum." Not too sure about those latter notes, but I suspect perhaps a bit of ozone, sea salt and rum.

Hook is primarily a leather accord from start to finish and the strongest note. Supporting that you have the three woods; cedar, oak and sandalwood - which are more pronounced on open and fade slowly into the background on the base - yet are always present and grounding like the decks of the ship below your feet. On open, you also get a bit of sharpness from the gunpowder and what could be ozone. The sea salt is subtle and lurks just below the surface - as does the rum. The latter seems to be a bit more pronounced in the aftershave and especially the EdP and adds a touch of warmth and very slight booziness. Whereas the aftershave has a good 4+ hours of longevity, the EdP easily boosts that into 6+ hours.

Hardware for today consisted of the #Merkur #Futur razor with a #PolSilver blade on shave two, a #Yaqi silvertip badger brush doing the legwork of loading and lathering the suds with rapidity and finesse in the #GTP scuttle.

I would say Hook fits in the "leathery" genre, which includes popular favorites like Declaration Grooming Cuir et Épices, Barrister and Mann First Snow and Leviathan or Phoenix and Beau Whitechapel. Then there's a variety of "cowboy" scents, but they tend to go more smokey whereas this one is woodsy. Hook is probably the most leathery of the shaving software. If you don't have the matching EdP you could run with Guerlain Habit Rouge for example. At any rate, I really like the scent of Hook a lot!