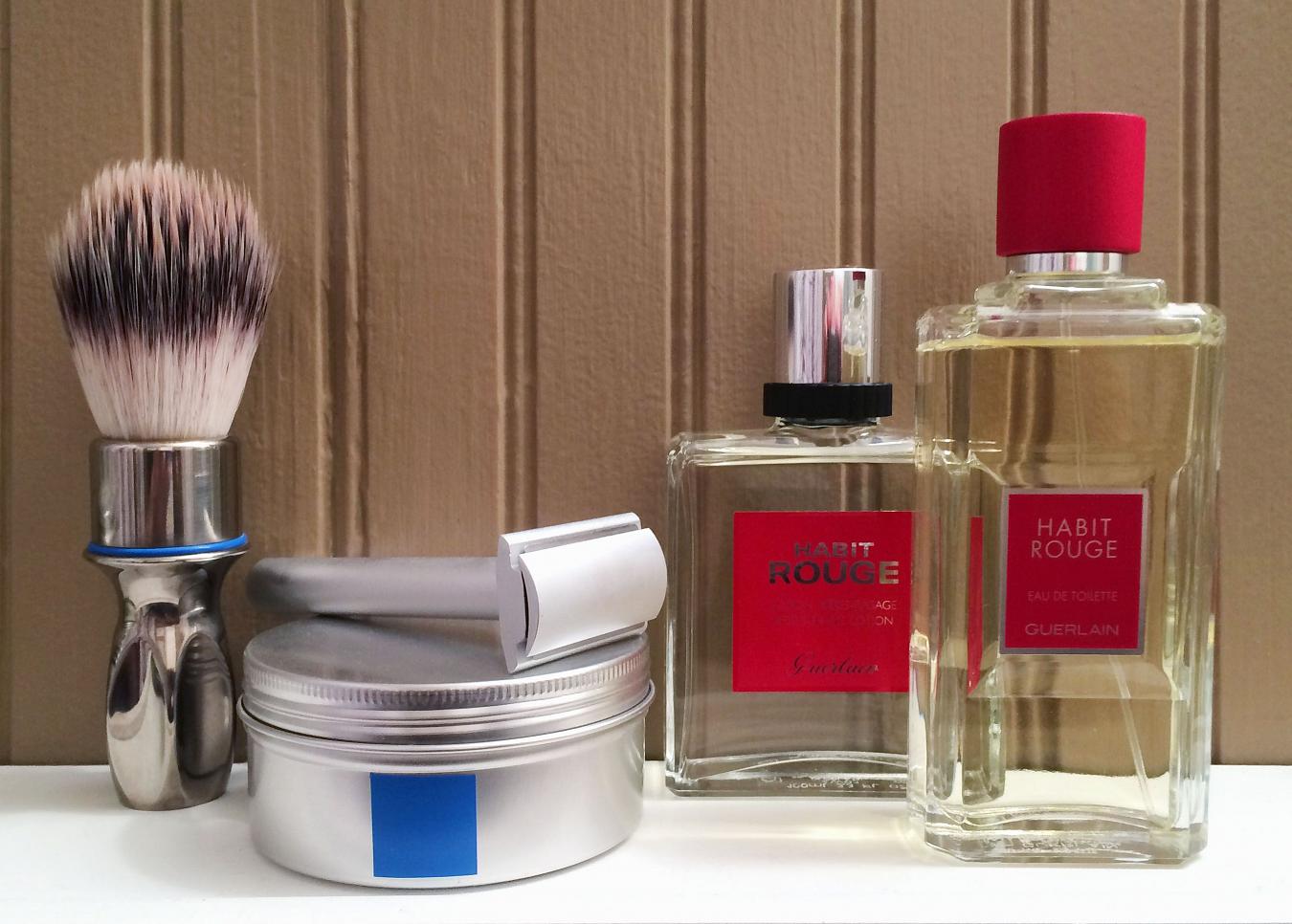 Today's SOTD is a nod to my nearly three-week vacation in Europe over the holidays with the scent of florals - via Klar Kabinett #soap and Guerlain Habit Rouge #aftershave and #EdT!

So yeah, it's been a little quiet 'round here of late. Just got back in-country last night from nearly three weeks over in Germany. Needless to say, I stocked up on plenty of Tabac goodies, but as usual, I grabbed a new high-end scent while over there from my favorite little shop, Parfümerie Ostendorf in Münster. This trip's selection was Guerlain Habit Rouge in matching aftershave and EdT. I settled on that as I'm a #Guerlain kinda guy. I've already got Homme, L'Homme L'Eau Boisée and Vetiver so it was natural to grab another scent of theirs. The performance is fairly given; fairly good sillage and longevity - but excellent scents.

Bitterness becomes freshness, playing on refined harmonies of lime and bitter orange. Its spicy, sophisticated heart, warmed by patchouli, rests on a base where leather mellows under the creamy caress of benzoin and vanilla with a rebellious touch.

Habit Rouge is no different. It's a classic fragrance, which was launched in 2003 - this being a re-orchestrated version of the original fragrance from 1965, the first oriental fragrance for men. The nose behind it is Jean-Paul Guerlain himself. The name and scent is actually a tribute to the equestrian art; Habit Rouge refers to the famous red jackets worn by the riders. It features top notes of bergamot, lemon, rosewood, basil and pimento; middle notes of sandalwood, carnation, patchouli, cedar, rose and cinnamon; base notes of vanilla, amber, moss, leather, benzoin, labdanum and olibanum. Long and short of it is notes of citrus up top which dries down to a woodsy, leathery and manly floral on the base that's just lovely. Definitely a warm oriental with a slightly floral vibe overall. The initial blast of citrus is fairly typical of Guerlain but fades quickly, as they do.

The soap for today was practically a no-brainer, but it was a tough choice between K Shave Worx Frosen and Klar Kabinett - the latter won. I don't use it nearly often enough and with its fairly pure, nothing-but-rose scent was just the ticket. Loading it for 30s produced copious amounts of creamy lather with ample cushion and glide. Definitely an underrated soap, and unfortunate that it was discontinued. It was carried on by Dusy, supposedly - but good luck finding that, either. For more, check out my first impression of Klar Kabinett soap.

Hardware for today included the #StandardRazors razor in "raw" finish fitted with a fresh #PolSilver blade while the #BSB Shaving Brush made quick work of generating the rosy suds in the #GTP scuttle. If there's one thing I miss when traveling, it's most definitely my scuttle. Going from warm suds every morning to mostly cold, it's a wake-up call! I don't know how I ever shaved without it... And if you don't have one - you should seriously consider one.

A great, manly, yet floral-scented shave today with coordinating soap, aftershave and EdT! Don't be put off by rose-scented software, really. Sure, it's floral - perhaps even the "most floral" out there - but it's the scent of royalty, and dates back to the earliest days of scents. The finish of Guerlain Habit Rouge mans it up totally. Fear not!

At any rate, it's good to be back - Happy New Year all! Let's kick this year off with more SOTD reports and reviews of shaving hardware and software!