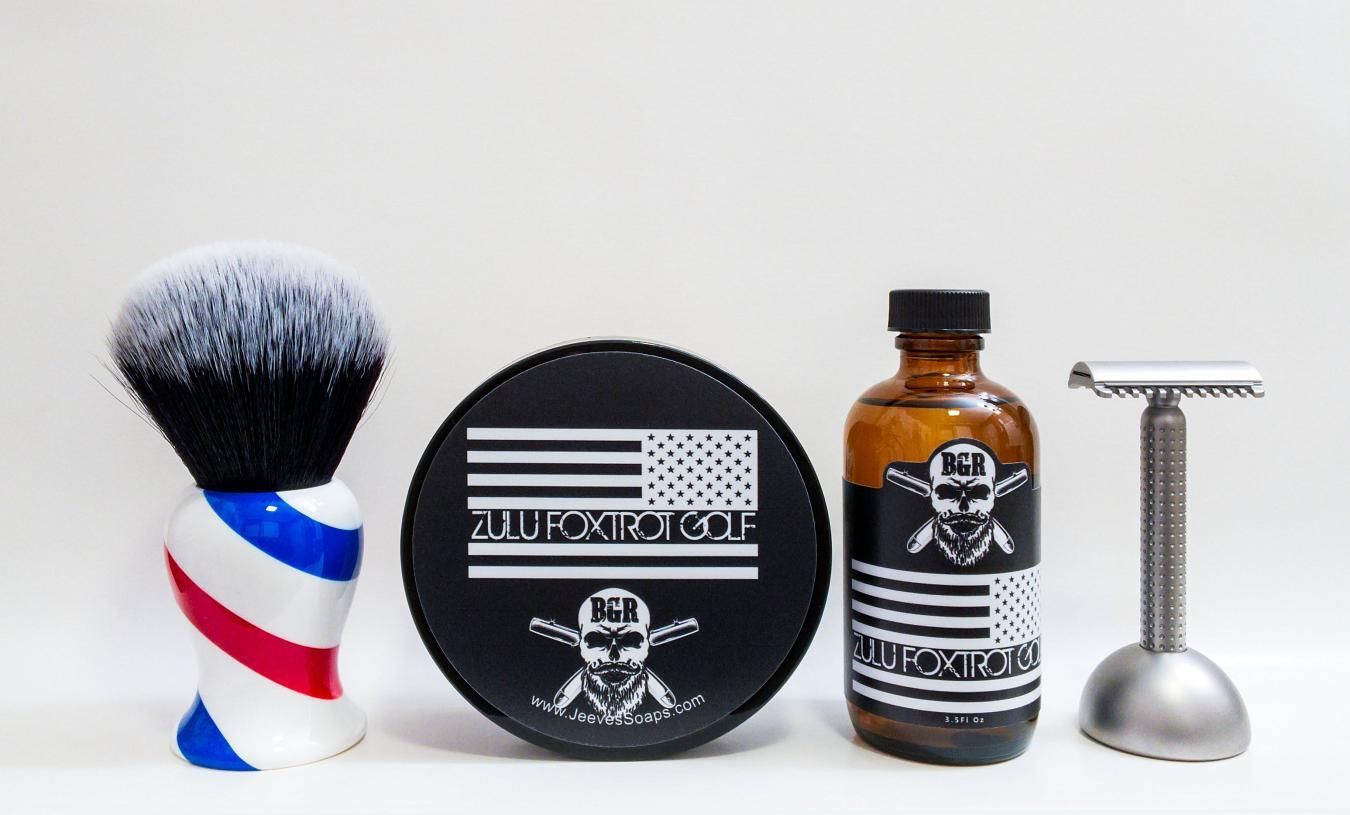 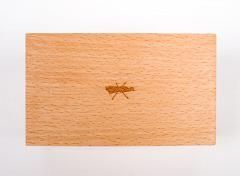 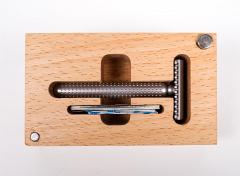 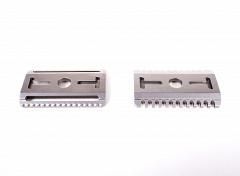 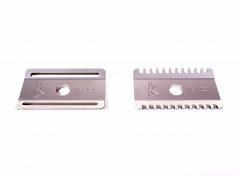 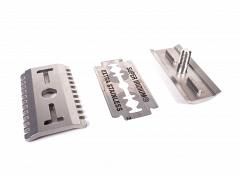 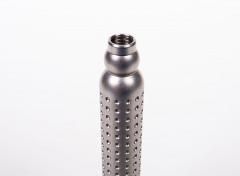 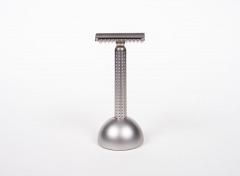 The software is from Jeeves of Hudson Street which before today, I hadn't used. I've known of this artisan for at least a couple of years now - had I only known what a performer and excellent value it is... The name of the software is Zulu Foxtrot Golf which is military parlance for ZFG or "Zero Fucks Given." Yours truly was responsible for the name! It was made for the Facebook shaving group Bloom & Groom Room or BGR. A fellow named Rafael Patiño (a.k.a. chicano_shaver) who you may remember from Xocolātl fame, did a fantastic job of the labels. A portion of the proceeds went to support veterans with PTSD.

The scent of ZFG is that of Dolce and Gabbana Masculine which is a Woody Aromatic fragrance for men, launched in 1999. The nose behind this fragrance is Max Gavarry. It has top notes of petitgrain and bergamot; middle notes of orange blossom, clary sage, mint, basil, jasmine and caraway and base notes of teak wood, fig leaf, musk, vetiver and cedar. It smells like a very nice, very refined cologne. On open you get the citrusy vibe common in Italian and some French colognes, which blends masterfully into the middle, which is decidedly more herbal. On the base is where the accord truly "mans up" with teak and cedar wood, musk and grassy, green vetiver. This is a tight fragrance.

The soap has a deceptively simple formula, but performed very well. Abundant, creamy lather with good cushion, primary and residual slickness. The stand out ingredient is babassu oil which is a palm oil; similar to coconut oil. Its melting point is close to body temperature, so liquefies on contact - this can even produce a (slight) cooling sensation. It's also an effective emollient. The cocoa butter and glycerin provide some skin food for a fairly nice (but not stand out) skin feel, post-shave. Here are the ingredients:

The aftershave, like the soap, also has a deceptively simple ingredient list. Also like the soap, it performed really well. Not so much alcohol where it just burns, as it's balanced well by the witch hazel. Similarly, the menthol isn't too potent where it overpowers the fragrance... Too many aftershaves have this issue. Finally, there's the glycerin which leaves a silky soft face feel without being tacky. Each ingredient is in just the right proportion. The scent strength is a healthy medium, and the longevity a respectable 6+ hours. Here are the ingredients:

So yeah, I was a little surprised at the performance; really nice showing by both products! They run $15.99 each, and considering same - represent excellent value. I should say this definitely won't be my last #JeevesSoaps products! If, like me, you haven't tried them previously - I'd definitely suggest giving them a go. I've used soaps and aftershaves that cost both less and more and didn't work as well. This is the sweet spot, right here.

Now let's talk about the razor - but first, a mea culpa... You may recall my last two shaves [1][2] where I used a #Feather blade, and was not happy, especially on the second. I chalked it up to the blade, as they tend to be a bit hit or miss (mostly the latter) with the majority of my razors. Still, I was puzzled as the shave shouldn't have been that rough unless the blade was truly FUBAR. I checked out the head closely, and lo and behold - there was a slight, uneven gap between the base plate and top cap when viewed from the ends. I found that I could squeeze the two together and close the gap. I thought, "that ain't right" along with "no way..." I was able to screw the handle in at least half a turn. Apparently I didn't quite tighten it down enough somehow. No more odd gaps! I was a little leery of using it again today, but the shave was absolutely perfect! In fact, better than my usual PolSilver blades. Whoops.

I'll recap my first impressions a little, but the real star of the show today is the (very) new razor from Tatara Razors based in Porto, Portugal called Masamune. Let's talk about the name briefly. A tatara (鑪) is the traditional Japanese furnace used for smelting iron and steel. Fitting too is the name, Masamune (正宗), also known as Gorō Nyūdō Masamune (五郎入道正宗, Priest Gorō Masamune, c.1264–1343 AD), is widely recognized as Japan's greatest swordsmith. This is why there's a samurai warrior depicted as the logo. I have to say, anything shaving related from Portugal is gold; witness Ach Brito and Musgo Real or 444 products to name a few!

Starting with the presentation, it arrived wrapped in black tissue paper with the razor (box) itself closed with a wax seal embossed with the samurai logo. Inside is a beefy and custom wooden box, again bearing the logo (burned in). The lid is held on by two very strong magnets. Inside, you'll find the razor handle, base plate and top cap (assembled) along with three Feather blades (rather fitting) and instructions. I have the second base plate and the stand, which do not come/fit in the box.

It's made of high grade stainless steel, in a matte, almost gunmetal colored finish and comes in at a very comfortable 91g. There are two base plate options; one is a scalloped solid bar (.63mm gap) and open comb (.73mm gap). Finally, there's the aforementioned, optional stand (which is surprisingly heavy). The handle is fairly unique to the razor, meaning that third-party handles aren't ideal (but could work; I'll test this). It's 11mm in diameter and has 378 dimples machined in, for grip. The handle fits perfectly into the stand, which itself has a spherical end, as does the bottom, inside of the stand (along with a drainage hole). Close tolerances everywhere (±0.02mm) and balanced design. The handling of the razor too, is perfectly balanced. Speaking of the Feather blades, I would describe the fit and finish of this razor easily as good as the AS-D2 razor - though while both are perfect, I find the Masamune is nicer overall.

I've used both the open comb (.73mm gap) and straight bar (.63mm gap) base plates with both #PolSilver and #Feather blades. I was completely surprised at how mild this razor felt! One might point out the relatively mild blade gap of .63/.73mm and that would be fair... But the gap alone does not tell the whole story. In fact, it's milder than my .68mm Timeless Razor with a smooth solid bar - yet about as efficient. In fact, I'd say it's easily as mild as the Feather AS-D2 razor (and that's saying a lot) yet more efficient... I usually shim mine. And this razor does that out of the box. Absolutely a beautiful shaving razor. It works whether you have a weekend's worth of growth or use it on the daily.

Because of its smoothness and slim, light build - you can drive it like a wild man. It's a sports car among heavy stainless steel razors. Even with the open comb, there's no fear of getting bitten. I was actually surprised at how smooth even the open comb was; no feeling of "raking your face" whatsoever. That said, it won't replace the likes of the Merkur Futur, Mühle R41 or Timeless Razor in a .95mm gap for unquestionable (if not ruthless) efficiency... But that's okay. I typically only use those razors on Monday mornings anyway. This is a daily driver that more than gets the job done. Worth pointing out that the straight bar is perhaps too mild for all but those hangover days when you need to be sure that you couldn't hurt yourself if you tried. I probably won't use it much. I'd actually encourage #TataraRazors to make a third base plate option that's got a larger gap still.

Admittedly, and at first blush, this razor does not come cheap. The combo you see pictured above (razor, extra base plate and base) comes in at about $284. Compared to the Feather AS-D2 at $260, you get an extra base plate and a much nicer box - plus the stand actually matches the finish of the razor. Lose the extra base plate and you come in at only $228! I know which one I'd choose - and I love the AS-D2. The problem is, while it too is mild; it's far too much so. I shim mine to use it. My recommendation then, is the #razor with an open comb base plate and stand. Unless you have very sensitive skin, skip the straight bar base plate.

The brush you see is a nice piece from #Yaqi making its debut today. It's a barber pole design, but the "red white and blue" makes a nice juxtaposition with the software labeling. It's a monster, and sports a 30mm Tuxedo knot. Curiously, and unlike the other brushes from Yaqi I've reviewed here so far, the loft wasn't too high - it was just right! It loaded and lathered like a beast. The #GTP scuttle kept the fine lather and the beast of a brush in check and nice and warm.

What a great shave today! Once I resolved my mistake of two days hence, it was a night and day difference. My bad! I can't recommend this razor highly enough. It's sublimely smooth, and efficient enough for a BBS shave, save perhaps for common problem areas (such as my jawline; this happens with most razors on me). Then there's the #JeevesSoaps software - It was also a pleasant surprise and excellent performers. Finally, there's the Yaqi brush, which ticks all the boxes and doesn't suffer from the excessive loft as some of their others do. Everything about this shave was just spot-on.