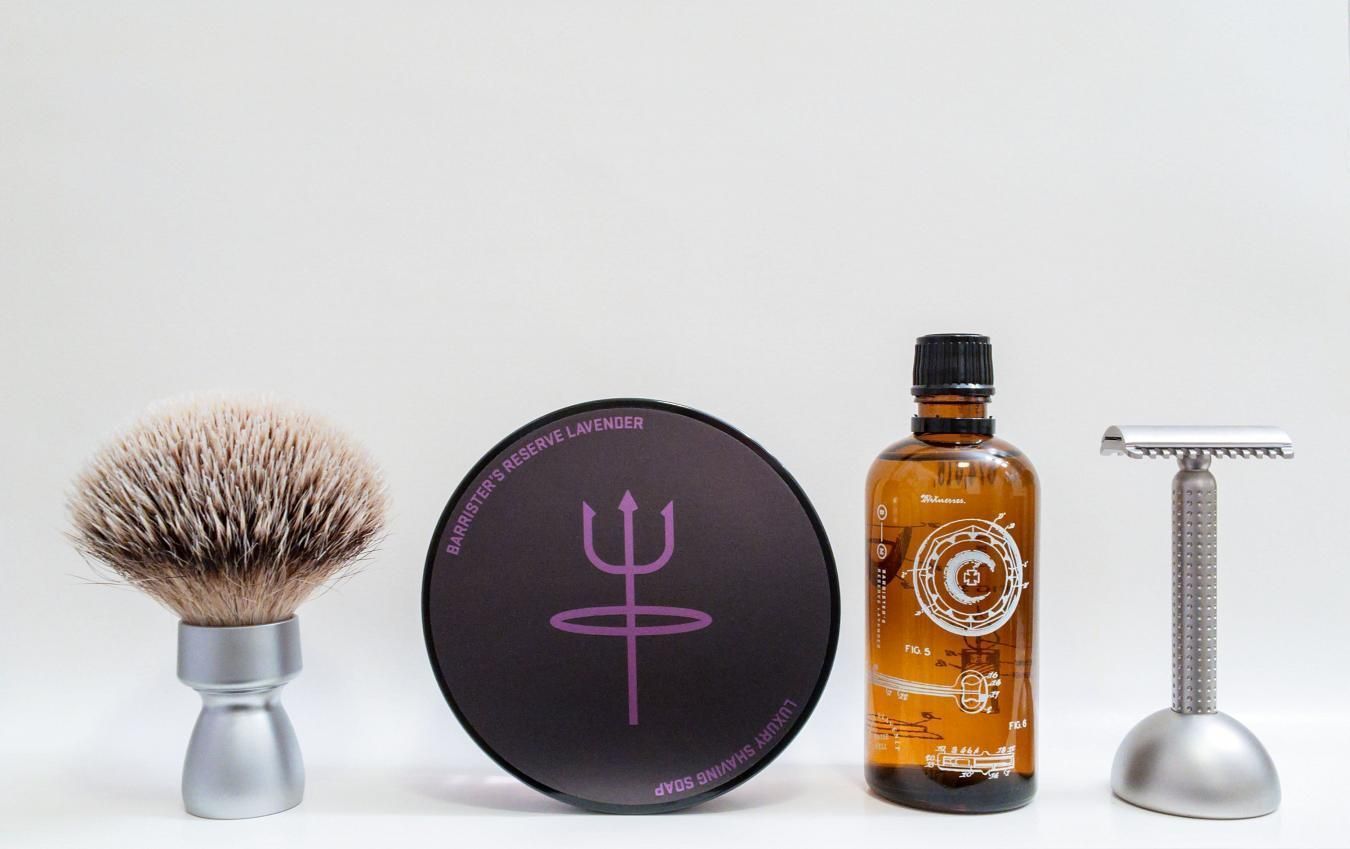 An introduction to the new Tatara Razors Masamune #razor with Barrister's Reserve Lavender #soap and #aftershave bringing Caldey Island Lavender to the masses.

Barrister’s Reserve: Lavender is as smooth as lavender can get. Based on a beautiful aftershave from Wales, this is the scent described by famed perfume critic Luca Turin as "Summer wind made smell" and "the greatest lavender of all time." We definitely agree.

I've reviewed two of the Barrister's Reserve soaps in-depth by #BarristerMann thus far; Spice and Cool - so check those out for details on the performance and characteristics of the soap base. Lavender (and Fern) was released on September 22, 2017 but due to various production issues, the matching aftershave(s) won't be released until October or even November. Now, the kit is complete, but I won't expand too much on them; see the review of Barrister's Reserve Lavender soap for info on that and the scent itself.

The aftershave is in the new bottles, which you can see in the photo above. Round and amber with black caps... Nothing too fancy (I liked the previous generation better) but they are silk screened, which is really nice - and high-end. They also come in custom, all-black "velveteen cardboard" boxes. The scent is quite like the soap, in the lovely Caldey Abbey Perfumes Caldey Island Lavender accord. It smells absolutely beautiful. While the scent strength doesn't go beyond a medium or so, it thankfully has a longevity of 6+ hours. Quite impressive for a lavender scent, really. They tend to be light - and fade away about as quickly. Performance of this advanced aftershave is of course, top notch.

The real star of the show today is the (very) new razor from Tatara Razors based in Porto, Portugal called Masamune. Let's talk about the name briefly. A tatara (鑪) is the traditional Japanese furnace used for smelting iron and steel. Fitting too is the name, Masamune (正宗), also known as Gorō Nyūdō Masamune (五郎入道正宗, Priest Gorō Masamune, c.1264–1343 AD), is widely recognized as Japan's greatest swordsmith. This is why there's a samurai warrior depicted as the logo. I have to say, anything shaving related from Portugal is gold; witness Ach Brito and Musgo Real or 444 products to name a few!

I'll be using this razor exclusively over the next week (or more) and update my thoughts as I go. But first impressions... Amazing. Starting with the presentation, it arrived wrapped in black tissue paper with the razor (box) itself closed with a wax seal embossed with the samurai logo. Inside is a beefy and custom wooden box, again bearing the logo (burned in). The lid is held on by two very strong magnets. Inside, you'll find the razor handle, base plate and top cap (assembled) along with three Feather blades (rather fitting) and instructions. I have the second base plate and the stand, which do not come/fit in the box.

It's made of high grade stainless steel, in a matte, almost gunmetal colored finish and comes in at a very comfortable 91g. There are two base plate options; one is a scalloped solid bar (.63mm gap) and open comb (.73mm gap). Finally, there's the aforementioned, optional stand (which is surprisingly heavy). The handle is fairly unique to the razor, meaning that third-party handles aren't ideal (but could work; I'll test this). It's 11mm in diameter and has 378 dimples machined in, for grip. The handle fits perfectly into the stand, which itself has a spherical end, as does the bottom, inside of the stand (along with a drainage hole). Close tolerances everywhere (±0.02mm) and balanced design. The handling of the razor too, is perfectly balanced. Speaking of the Feather blades, I would describe the fit and finish of this razor easily as good as the AS-D2 razor.

I decided to go with the open comb base plate as I had a weekend's worth of growth to mow down, having not shaved on Wednesday or Thursday. I was completely surprised at how mild this razor felt! One might point out the relatively mild blade gap of .73mm and that would be fair... But the gap alone does not tell the whole story. In fact, it's milder than my .68mm Timeless Razor with a smooth solid bar - yet about as efficient. I'll be using this combo again on Monday, followed by the scalloped solid bar the rest of the week. Let's see how it works out.

Admittedly, and at first blush, this razor does not come cheap. The combo you see pictured above (razor, extra base plate and base) comes in at about $284. Compared to the Feather AS-D2 at $260, you get an extra base plate and a much nicer box - plus the stand actually matches the finish of the razor. Lose the extra base plate and you come in at only $228! I know which one I'd choose - and I love the AS-D2. The problem is, while it too is mild; it's far too much so. I shim mine to use it.

The rest of the hardware includes an aluminum handled #Yaqi brush with a 24mm silvertip badger knot and my trusty sidekick, the #GTP scuttle. Serving to generate lovely lather from the #BarristerMann soap and keep it warm.

What a lovely, effortless shave today! Completely blown away by the smoothness of the #TataraRazors offering, despite having an open comb. More than efficient enough, though not quite BBS. Continued testing will see how it fares - stay tuned!