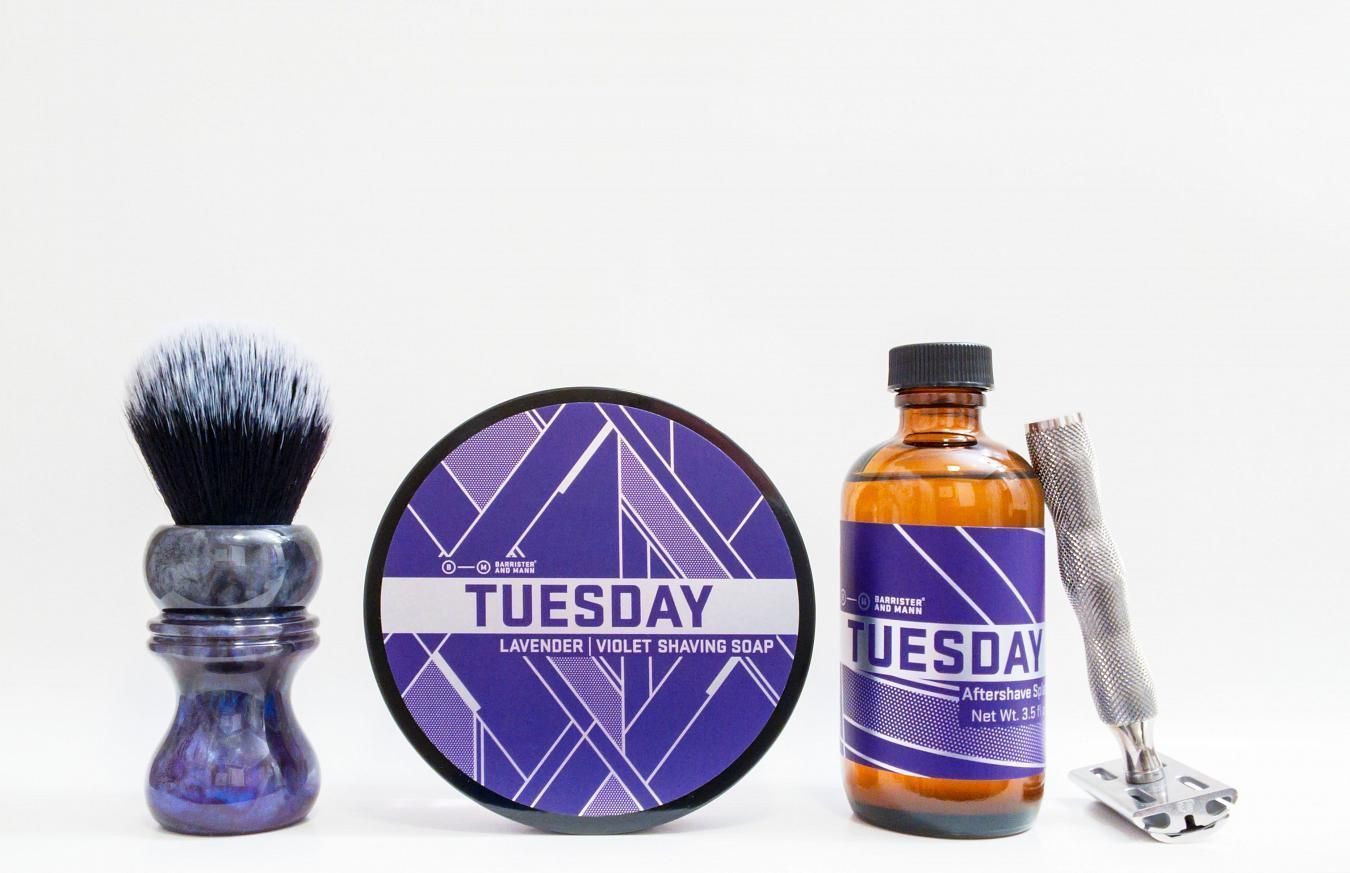 Going full-on purple and checking out Barrister and Mann Tuesday #soap and #aftershave, the second scent of the most recent release - and a complementary fragrance to Just Right for a Tuesday EdP.

The perfect compliment to our Just Right for a Tuesday EdP, Tuesday is a crisp, slightly spicy blend of lavender and violet meant for those days when you don’t want anything too fussy, sweet, or heavy. The combination produces a firmly unisex floral that’s at home anywhere, at any time, and will brighten your shave, morning or night.

Let the flowers out.

On June 2, 2018 Barrister and Mann released two soap/aftershave products; one named Patches and one named Tuesday. Today we look at the latter. It's your typical Glissant and Tonique bases, so I won't talk about performance today. If you need more information in that regard, click on #BarristerMann to peruse past reviews. Naturally, I've added it to the History of Barrister and Mann! Instead, let's talk about the scent.

The official notes are simply lavender and violets. Why, you might ask - when Barrister and Mann already has an excellent lavender called Barrister's Reserve Lavender? Well, like Sinfonia which was released on February 1, 2018 it's meant to be a complementary scent to an EdP. As Sinfonia complemented Romance in Middlesex County - Tuesday is to complement Just Right for a Tuesday. Besides the word Tuesday, the EdP (which itself has top notes of green fig, black pepper, lavender and nutmeg; middle notes of violet, Iris, rose and allspice and base notes of vetiver, benzoin, rose and ambergris) shares the two notes.

A brief background on a current trend in the wet shaving market... You might have noticed that Barrister and Mann and other other artisans are moving into niche, fine fragrances. You would not be wrong. Of course there was always Chatillon Lux with essentially every fragrance (and by extension and collaboration, Declaration Grooming - who incidentally did their own, well-received Darkfall EdT). But the first artisan to take this transition, and seriously - was Barrister and Mann starting with Fougére Gothique. They also made EdT of their more popular scents before that... Others noticed this trend and wanted in on the action. However, they only took existing scents and bolstered them to EdT strength, like for example Wholly Kaw and Phoenix Artisan Accoutrements. While niche, they are not really fine fragrances.

But back to Tuesday as a standalone offering... As mentioned, it's a rather simple, two-dimensional scent of lavender and violet. It definitely smells nice and subtle; genuinely "purple" if you will. There's nothing that grabs you. In fact, and I hate to say it, if you already have one or more of a ton of lavender scents out there, Tuesday doesn't really bring anything to the table. While the two notes are nicely balanced - that's also its shortcoming. It's worth pointing out of course, that this was by design. While Barrister and Mann already had a lavender scent, there was nothing with violet - let alone both. I suppose I was just hoping for more violet, to make it stand out from all the lavenders. If you want the latter, there's perhaps nothing finer than the aforementioned Barrister's Reserve Lavender. Scent strength is a lighter medium with a fairly short, 2-3 hour longevity.

The packaging, like that for Patches has interesting new artwork, of an illustrated variety. A bit of a different direction for Barrister and Mann much like the prior release of Jacinthe. I think we'll be seeing more of this in the future. What you can't see is the picture is that the purple is printed on a silver label (the grey tone). However, the aftershave label was crooked; a rarity, but I docked the Packaging score in the chart above above for it. I also blame my shelf, which takes a bender about where the bottle is - making the fluid levels crooked most of the time, along with the razor at the end. 🙄

Hardware for today consisted of a mellow #TimelessRazor in stainless with a .68mm blade gap, a titanium #Stork handle and a #PolSilver blade on shave five. The brush is my go-to "purple scent" brush from #WildWestBrushworks with a 24mm Tuxedo knot and a purple, black and white resin color scheme - making it quite apropos. The #GTP scuttle of course, rounded things out.

A really nice shave with top notch software and hardware... No surprises here. Unfortunately, while I really like Tuesday - it didn't captivate me from a scent perspective. One could argue it's not really supposed to... It's a subtle, complementary bit of software to the real star; Just Right for a Tuesday EdP. My sample got sidetracked so I can't talk about the entire experience; look for an update.