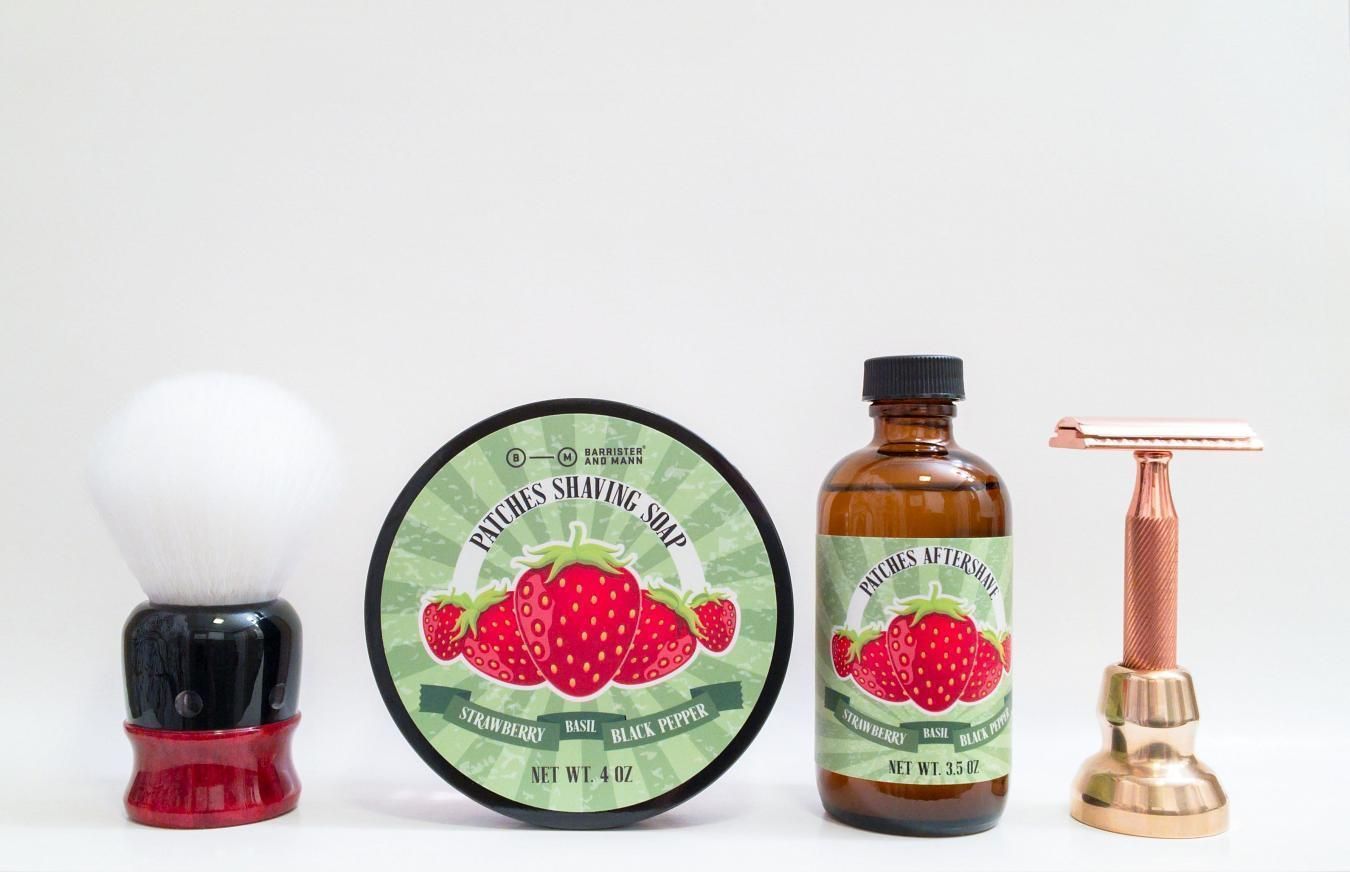 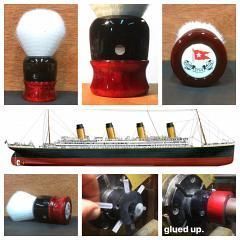 Tons to talk about today, including Barrister and Mann Patches #soap and #aftershave, the all-copper Above the Tie Windsor razor and an all-custom Leo Frilot RMS Titanic brush!

What’s better than the Summers of your childhood? How about strawberry basil jam? Inspired by a wonderful farm stand jam from bygone days, we blended strawberry, basil and black pepper into a cheerful slice of countryside nostalgia. Patches is a personal favorite of several Barrister and Mann staff, and we know you’ll love it as much as we do!

On June 2, 2018 Barrister and Mann released two soap/aftershave products; one named Patches and one named Tuesday. Today we look at the former. It's your typical Glissant and Tonique bases, so I won't talk about performance today. If you need more information in that regard, click on #BarristerMann to peruse past reviews. Naturally, I've added it to the History of Barrister and Mann! Instead, let's talk about the scent. As you might have guessed between the name, Patches - and you know, the strawberries in the artwork... This is primarily a strawberry-forward scent. With that said, it's not that one dimensional.

The official notes are strawberry, basil and black pepper. What's not listed is the rather strong component of vanillin. A surprising number of strawberry scents rely on a bit of vanilla to boost it. Naturally, it lends a slightly warm, rather creamy body to the scent - and Patches is no exception. In fact, I'd call it more strawberry/vanilla-forward. Those two notes alone would normally give a very sweet berry scent, but the basil adds a nice touch of warm, spicy, herbal green and the black pepper just a hint more spice. Combined, they take the edge off of the sweetness to keep it from being cloying. Overall the scent is obviously gourmand with its central strawberry theme, but the supporting notes make it really lush and delicious. Scent strength is robust and strong, longevity surprising at 6+ hours. This stuff is seriously summer in a tub/bottle.

To finish, the vanillin is why the soap is actually brown near the surface; that's the vanillin reacting with the air. From a creamy off-white, the longer it's exposed, the darker it will get. I don't believe it will get, say, Lavanille dark... But it's not too far off. The lather starts off a darker beige but as you work it, it goes almost white. Therefore, be careful when using lighter colored (natural) brushes with it as it may stain them slightly. Similarly, do not apply the aftershave to bright/white clothing for the same reason.

The first bit of hardware to cover today is the Above the Tie Windsor razor, fashioned completely out of Tellurium Copper 145. It has the CR1 base plate, which is their "mid aggressive" design - with a .58mm blade gap. Before it and milder is the CM1 with a .25mm blade gap - after it and more aggressive is the CH1 sporting a .91mm blade gap. Unlike their other M1/R1/H1 base plates, these are longer, to cover the ends of the blade, for a more refined look. The handle is their Calypso which is a "barber pole" design and is 3½" long, weighing 82 grams. You can buy all the pieces (save for the top cap, which optionally comes with base plates) separately, in a five-piece kit or even mixed metals (the other being stainless steel). One thing that's worth mentioning is that the copper parts have a clear coat on them. If you're expecting a raw metal razor (like say, Timeless Razor) then this is not the razor for you. Personally, I'm not a fan - it darkens the color a bit over natural, but does prevent oxidation/tarnish. It also feels a bit weird.

How does it shave? Amaaaaazing. Obviously it's too soon to tell, but it mowed down Monday morning stubble with ease. Blade feel is more than your average, milder razor - but nowhere near more aggressive ones either. In my opinion, this is the perfect compromise between the two extremes. And something I wish that the likes of Timeless Razor (and others) would offer. With them, I switch between the aggressive razors on Mondays to the mild razors the rest of the week. You could say one is too much, the other too little. I believe I'll be using the #AboveTheTie #Windsor #razor with a CR1 base plate an awful lot; certainly the rest of the week to start with!

The next piece of hardware is that fancy brush you see on the left... It is the RMS Titanic brush, custom made by Leo Frilot. I gave Leo the general specs; black and red representing the hull, an all-white knot up top and the White Star Line logo as a coin in the bottom. During our back-n-forth I came up with the idea for the portholes (which you can kind of make out in the picture). They allow light to pass through and light up! They're implemented by way of three polycarbonate rods passing through the handle (making for six portholes). The shape of the handle, from the bulging black top to the inward curving red bottom - suggests the shape of the hull, while the order and ratio between red, black and white colors is also accurate. The problem arose in sourcing not just an all-white knot... But one that's 30mm - it's the Titanic, after all! Most artisans only carry a 24-26mm size, if at all. I had to go to the source - Oumo in China to get it. Everything was coming together now, and #LeoFrilot executed it perfectly!

The knot, synthetic and all-white, is a beast - and unlike other synthetic knots. The fibers are thicker than even a Tuxedo but similarly crimped; just more intensely. This makes for a rather coarse knot of stiffer fibers... Giving it a good bit of backbone and making it less of a mop and lather hog. Some people don't care for it; it's obviously more plasticky than most synthetics, which some have detailed (perhaps a bit too) extensively. I liked the performance of the knot, but it's early yet. Waiting in the wings is a reverse-Motherlode knot that's also 30mm. Just like the smaller sizes, it's insanely soft and dense - but with the majority of the knot white, with brownish tips (just less reddish). While not ideal in terms of theming, it would still work out well. I just fear it'll be a total mop! So let's start with the all-white and go from there... The knot is temporarily set, should I change my mind - it'll be easy to swap it out. The #GTP scuttle rounded things out today.

So yeah... Lots of awesomeness today! A berry fan's dream come true with Patches in terms of scent and performance. I needed this in my life. A really eye-catching, all-copper razor that shaves like a dream. I predict many shaves together ahead. Finally, the amazing RMS Titanic brush that's dear to my heart... I've always been fascinated by her story, and read over two dozen books on her, the tragic demise and both the passengers and crew. Leo took my vision and ran with it - executing it perfectly.