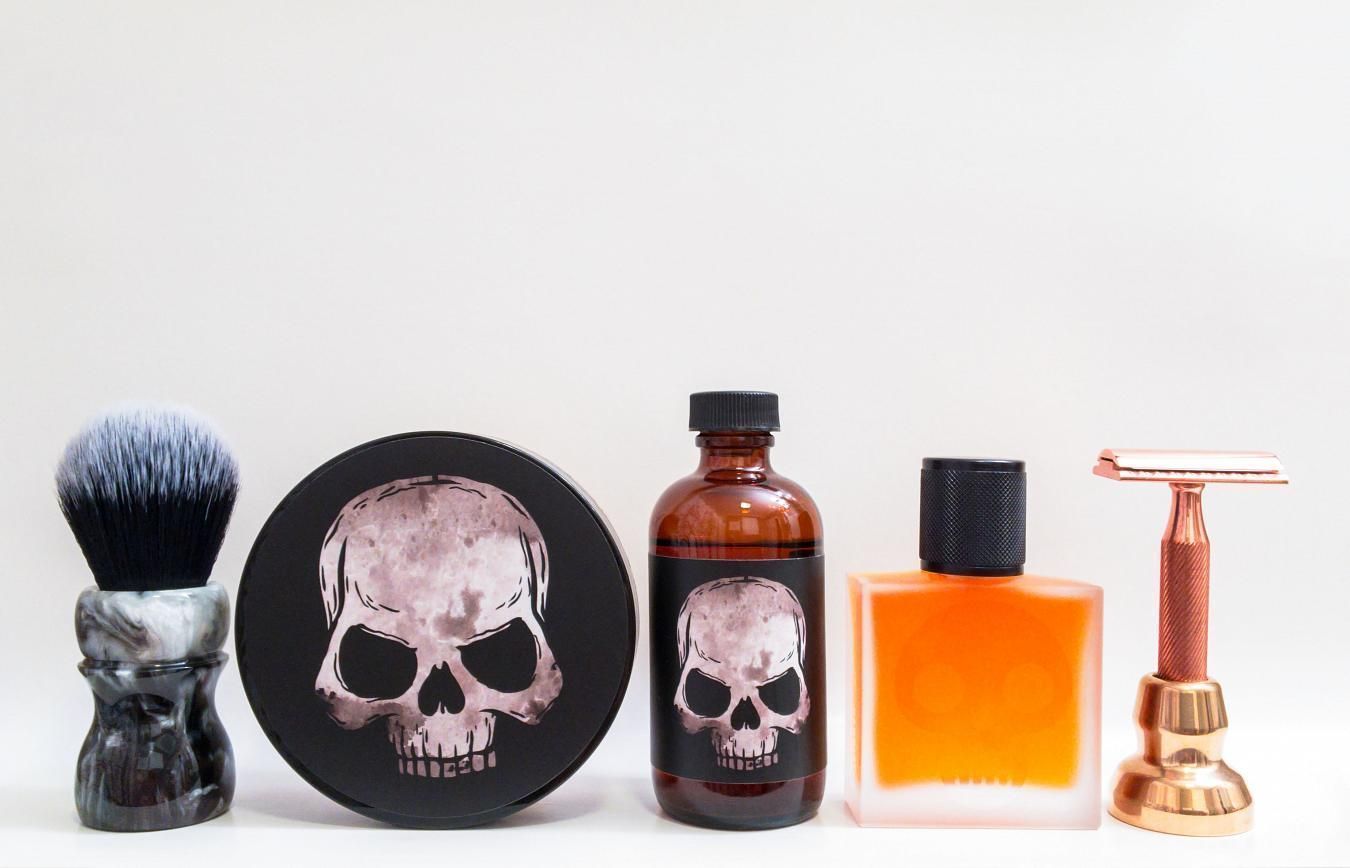 An autumnal favorite makes a reappearance - Barrister and Mann Hallows #soap and #aftershave - now with a matching #EdT.

A popular haunt for corpse harvesters in the nineteenth century, who emptied its graves to fuel the lectures and research of local medical schools, Boston's Copp's Hill Cemetery has long been thought haunted by ghouls and vengeful spirits. The murderer John White Webster is said to rest here in an unmarked tomb, and the Lovecraftian tale "Pickman's Model" speculates that the place is a hive of undeath and rot, a gathering ground for restless souls and unrealized doom. There is a rumor that small children around Copp's Hill are still not allowed outside past dark.

Boston is a city of history, home to strange and often gruesome happenings. It was our first home and gave rise to many of our most famous creations. Fragrances of dark animus and warped design.

Taking inspiration from the swamps and churchyards of the city, we combine vetiver, oakmoss, black pepper, cocoa, labdanum, and cedar to produce a deep, cold scent suited to the chilly, bitter days of late October. Gloomy, rich, and perversely elegant, Hallows is a reminder of why men once feared the dark.

I've done a lot of reviews of #BarristerMann goodies over their history - in fact, almost every product they've released! Click on the hashtag to browse them all, or check out the History of Barrister and Mann for a more targeted approach. Regular readers should be well aware of the performance of both soap and aftershave, especially in this older formula. As for this particular scent, I've reviewed Hallows extensively in the past. Today I'm only looking at the new Eau de Toilette.

Hallows has been an autumnal favorite at Barrister and Mann for many years now... The first release was way back in 2013, and it's the artwork from then - that you see on the current release (the illustrated skull). The prior release in 2016 was the first to offer the soap in the Glissant formulation. It took a year off in 2017, in favor of Fougère Gothique. It has always been a release fraught with peril... Early on, not enough was made to satisfy demand and sold out in no time flat. Then came the aftermarket gougers. Packaging also got more extravagant with each release, causing additional pain. Therefore, it's no surprise that Hallows may have finally met its end (again):

After much deliberation, we have decided that this year will be the final release for Hallows. Our remaining soap and aftershave stock will be available through the end of the month, but once they're gone, that will be it.

A real shame, as it's a great scent and has a cult following of sorts. That said, I think the market is now saturated. Personally, I still have my Black Label formulation (seen above) as well as a spare set from the 2016 Glissant release (the one with the controversial artwork). I was tempted to pick up the current set, if only for the throwback artwork... But I'm good. What I did grab was the matching EdT that finally made its appearance this year. Retailing at $50... Nay, $49.99... It too has reached its end; almost. Final stock posted on the Barrister and Mann site is gone, sold out. You'll need to hurry and hit up the usual retailers to find some now.

The EdT is described, simply, as "50 ml. Shipped in a beautiful acid-etched bottle with gnurled [sic] cap and custom box." That doesn't do it justice. At all. Starting with the custom box, in all black with white text, is beautiful. Glossy artwork and matte, almost velvety textures everywhere else set it apart from the crowd from the get go. Inside you'll find what is indeed, "a beautiful acid-etched bottle." It's frosted, yet the artwork (like on the box) is glossy. The cap is black and knurled for supreme grip and slips on and off (there's no "click" to lock it in place). The sprayer is crimped on; no removing it. Absolutely top notch packaging and presentation.

The juice itself is strong. Like, "oh, hell yeah!" strong - at least initially. If you like the scent, you'll love the EdT. This is the missing piece of all the prior releases. It goes on strong, with ample projection and sillage and stays solid for a few hours... Before fading somewhat quickly at the end. Overall, the longevity is pegged at about 5 hours. This was surprising - and disappointing. I was truly hoping for greater longevity from the EdT. On clothing (as opposed to the skin) it lasts longer, and you'll still get semi-recognizable whiffs after five hours, at least.

Presentation wise, the EdT is up there with Fougère Gothique. Scent wise, it's everything you love, but dialed up. It represents a good value; fairly comparable to commercial offerings of colognes.

Hardware today consisted of the #AboveTheTie Windsor razor in tellurium copper with a fresh #PolSilver blade. The brush, a nice combo from #LowbornSupply with a 24mm Tuxedo knot. The #GTP scuttle rounded things out and kept the lather temperature nice and warm - despite the rapidly falling temperatures outside.

Hallows has reached its final - and ultimate stage. The EdT was a grand way to say goodbye to an old friend. Whether or not it's really dead remains to be seen as its demise has been prognosticated before... But this may actually be the end. If you've waffled up until now or you're an ardent fan... Stock is running low on the EdT and the soap and aftershave combo will stop being produced at the end of this month - so act now! Hallows. The myth... The legend. So long, old pal.