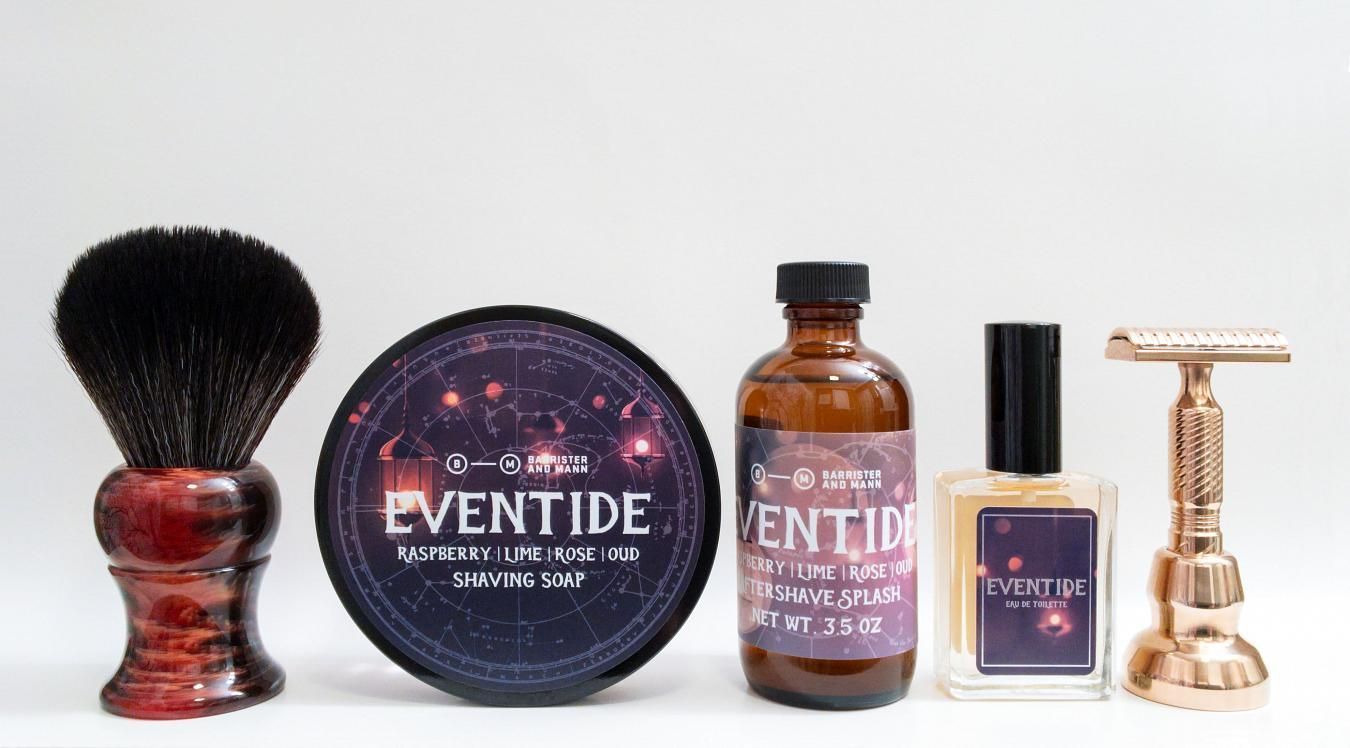 The second of the "holiday scent" releases from Barrister and Mann is Eventide in matching #soap and #aftershave with an #EdT kicker. For fans of oud, it's tempered to more broadly appeal and fits the mood of the holidays rather than smack you with kitsch.

As the weather grows colder and the days shorter, a warm, fruity, woody fragrance is the perfect way to counteract the winter blues.

Derived from the natural defenses of the agarwood tree, oud is tremendously strong, tar-like, and woody. Where most scent makers tend to play up the woody, ambery characteristics of the material, we decided to do things a bit differently. To soften the rough, phenolic character of oud, we decided to blend the scents of rose and raspberry, then added a healthy dose of tangy, acidic lime to keep it from getting too heavy. The overall scent is warm and inviting, fruity without being candy-like, and wholly suited to the darkness of wintertime.

The Eventide is upon us. Hail the night.

I've reviewed practically (if not literally) every single Glissant and Tonique based product by #BarristerMann here (if there's any doubt, click that hashtag to browse them all). Most recently, my in-depth review of Citricuyá which was a very limited release. Needless to say, the performance of both bases should be pretty well known by now, so I won't get into any of that today. Let's talk about the exciting new part; the scent!

The notes of Eventide are deceptively simple, and the notes include raspberry, lime, rose and oud. I'll say that this scent may not appeal to as wide an audience as Promises which I reviewed earlier in the week, and the other of the two holiday releases from #BarristerMann. I suspect that despite their best effort, oud needs to be appreciated. No doubt, the treatment in Eventide is nicely done and I think it works as billed. On open you get a fruity nose from the raspberry and lime, which descends into the more rosy middle. The base is more warming oud than citrus, but is the undertone throughout. It never settles into just oud, as the rose too, lingers into the base. This is definitely a kinder, gentler oud.

The soap is a healthy medium as far as scent strength, with the aftershave following suit. On it's own, the aftershave has moderate sillage and longevity. The EdT has both a stronger sillage and much better longevity but it's not intense by any means. Also, if you're looking for a really woodsy scent, this is not it. While the oud is predominant, it's tempered well. If I had to pick between this and Promises I'd have to give the nod to the latter... Not because I dislike this scent, but because I really, really like that one. Plus, I think it will appeal to more people. I just wish that it too had an EdT.

Hardware today included the #TimelessRazor #TRBR38 bronze razor with a #PolSilver blade on shave six. The #GTP scuttle did its level best keeping the lather contained and warm throughout the shave, which, as always - it did with aplomb. I love this scuttle... The best on the market, IMO.

Another new brush is featured today, and this one comes from #Yaqi in China. This beast doesn't technically have a name, other than the appealing "Men's Shaving Brush with Resin Handle Nylon For Men." It cost a whopping $11.70 and features a BOSS knot in a rather much larger than normal 28mm size. The loft is also quite oversized at 62mm. Equally impressive is the handle, which measures 45x62mm.

Like I said, it's a beast - and as you can see in the photo above, makes the software items appear diminutive by comparison. Lathering was pretty easy, despite the... Generous loft - which tends to make the knot appear less dense thanks to the spread, and overall a bit floppy (though not as bad as the Plisson). This is a common theme with the Yaqi offerings. Just a gentle nudge and it covered the entire puck, loaded and lathered quite nicely. I still prefer lower lofts (and their resultant denser grouping of the bristles) with a smidge more backbone. Just load a bit heavier with a drier knot and you're aces.

A fine shave today, for sure. Eventide is a bold scent, that perhaps won't appeal to everyone - and doesn't quite fall under a "holiday scent" per se, as there are no gimmicky holiday tie-ins to be found. No fir or pine needles, cookies or cinnamon. Rather this one goes after the general mood of the holidays. Nevertheless, if you like oud (and perhaps even if you don't) then you might want to give this one a try. It's more broadly appealing than the more "hardcore" oud scents and of course, has all the performance of the Barrister and Mann Glissant and Tonique bases.