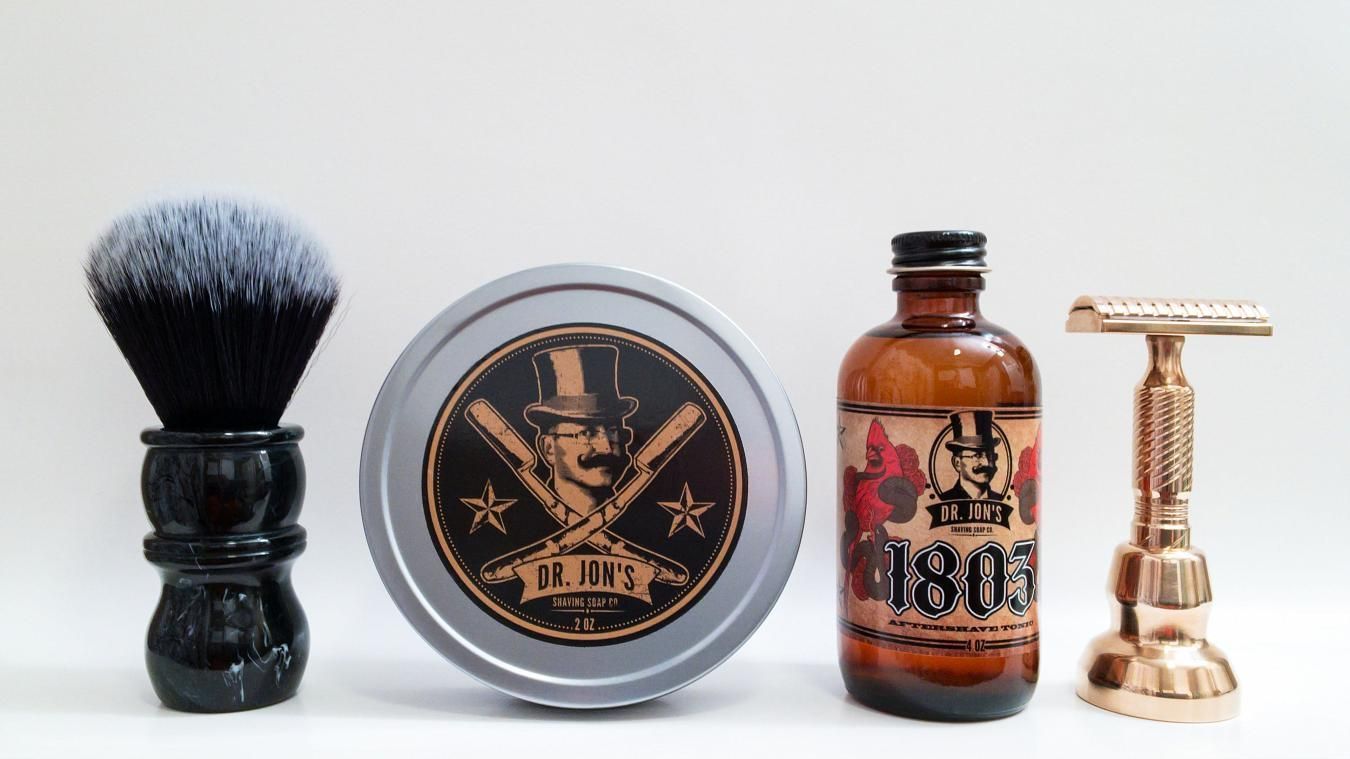 #Testing out the upcoming Volume 3 #soap formula by Dr. Jon's today in the new Essentials fragrance of Sage and Sweet Birch with an 1803 #aftershave finish!

First, some preliminaries. This is a new Volume 3 (or v3 if you like) soap formula by #DrJonsSoapCo (and has a generic label on the tin). It is scented as Sage and Sweet Birch from the new Essentials line (which uses only essential oils)... Because it was handy. The Essentials line will remain using the current Volume 2 formula. It will however, be used in the normal line of soaps. The timeline for this has yet to be determined. I used an aftershave from another combo I have, called 1803 because it's a nice (not to mention underrated) scent and wanted an aftershave from the same artisan. This is what I rated under Scent, above in the chart.

I've been a long time fan of Dr. Jon's and have used all of his products for years now. I've also always maintained that his was one of the slickest soaps around, and this new formula kicks it up a notch. So I'll just talk about the soap today. It came in a full-sized, regular tin - albeit without a label. I applied a generic label, and what you see in the photo above.

I'm going to preface this by saying this formula reminds me of Barrister's Reserve by Barrister and Mann in a few ways... Loading for one, is easier. The soap is harder and doesn't turn gooey at all. And rather than loading less than usual like with the former - I actually had to load more... I went with 40s over my usual 25-30s (I tend to go for 30s with new artisans). Yet even that was just enough for three passes. In all fairness, I don't know if it's due to the formula - or a new Yaqi brush that I used (more on that below).

Generating the lather in my scuttle, the proto-lather behaved in a manner similar to the aforementioned Barrister's Reserve... It struck me as an emulsifier-rich formula, the way it stuck to the inside of the scuttle, yet wiped away as the brush made its revolutions. Hard to describe, but you'd recognize it if you compared them side-by-side. The lather itself was very nice; creamy and dense, with excellent primary and secondary slickness. Was it better than Volume Two in those terms? The lather was definitely... Different. Both creamier and denser, so a win there. How about slickness? Volume Two is already outstanding, but this one was perhaps just a bit better on both primary and secondary slickness. I think it would make a nice upgrade to the existing soap formula.

A brief note on the scent of this soap - as mentioned, it was thrown in because it was handy. But if you're curious about the Essentials line, it's apropos. The scent of Sage and Sweet Birch is nice - it's fresh and invigorating. Sage, known as salvia officinalis has a strong, spicy, clarifying and uplifting aroma. Sweet Birch, known as betula lenta (also known as black birch, cherry birch, mahogany birch or spice birch) has a sweet, sharp, minty, fresh, camphoraceous aroma. Between the two notes, the scent strength is a healthy medium.

Hardware today consisted of the #TimelessRazor #TRBR38 bronze razor with a #PolSilver blade on shave five and the usual #GTP scuttle for lather making. Now for the brush, which hails from #Yaqi. It's a black and white resin, supposedly "marbelized." But as you can see, it's less marble and more just... Black with white flecks. The Yaqi product page warns of variations, and between mass production and luck of the draw - I ended up with a fairly boring example. The brush is fitted with a 24mm Tuxedo knot. This is where it gets interesting.

It's a 24mm diameter knot and the loft is stated to be 60mm - while most artisans tend to use 50-54mm. This has two effects. First, the typical Tuxedo knot brush has a good bit more backbone and second, appears denser. This brush is just the opposite - as it's floppier and appears less dense. You'll note that the knot has a wider spread than usual in the photo, which is why it appears less dense. When the knots are squeezed, they're about the same diameter. This may have contributed to the loading "anomaly" I had with the soap. This isn't a slight against the brush; it performed well, has a nice heft to it and it's nice to experience the Tuxedo knot in a softer ("floppier") form.

A very nice shave today at any rate. The new Volume 3 formula is better than the previous version; by a good amount in some ways, to a lesser degree in others... I believe it would make a worthy successor!