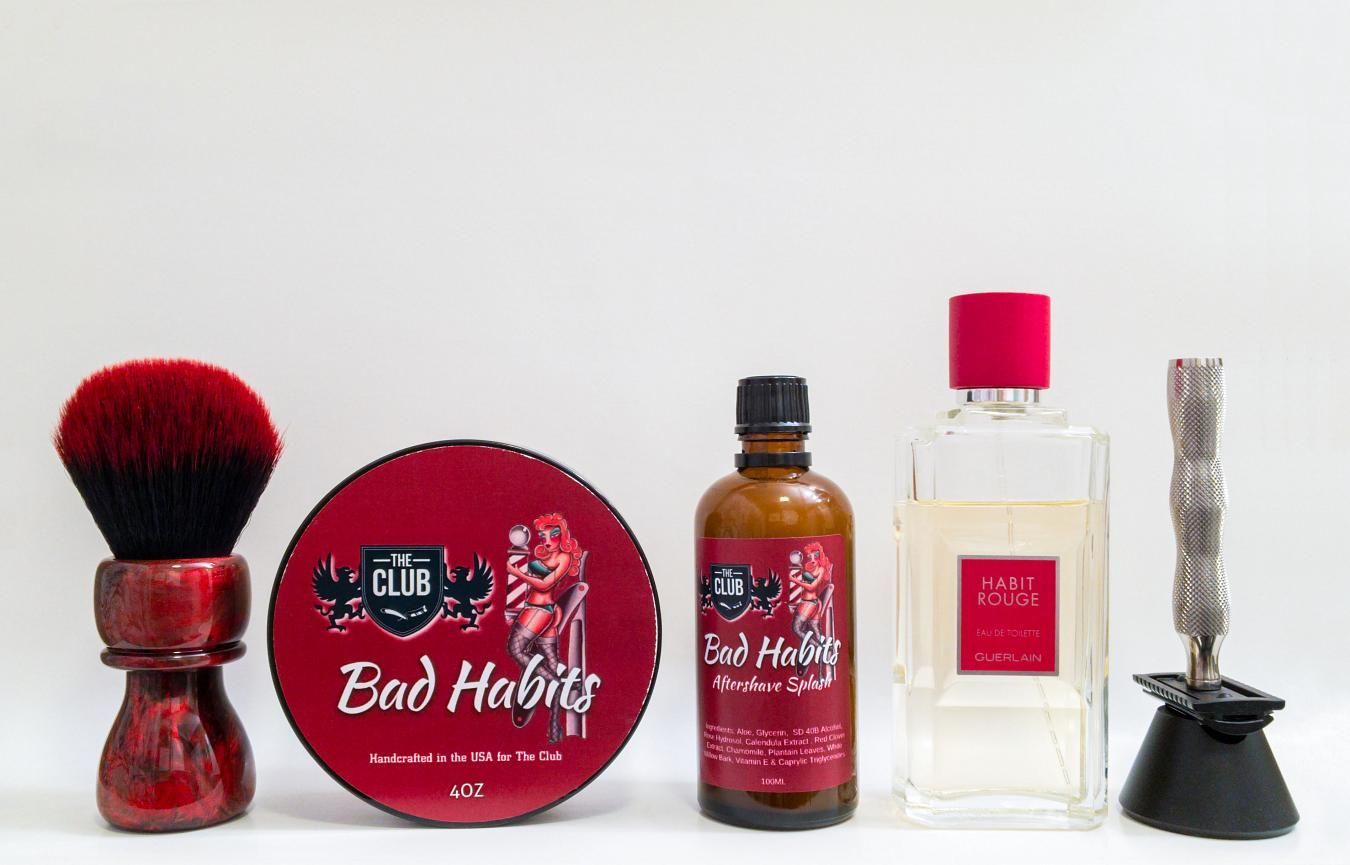 Fans of Guerlain Habit Rouge will find this The Club Bad Habits offering in a #soap and #aftershave a great companion to the original #aftershave and #EdT.

Bad Habits is somewhat conflicted. At first, it has a very aristocratic, elegant type scent. It has this elite, upper-class equestrian vibe that I love. The leather, citrus and vanilla become wonderfully balanced in this soap. As classy as it smells, there's also a 'Rock Star' quality to this scent. In fact, Keith Richards said that women went crazy for him once he started wearing the inspiration to this soap (Guerlain Habit Rouge). There's a citrus and smooth leather entrance with a powdery quality that is amazingly close to it's inspiration. Rose, carnation and jasmine form one of the forces that hold it together. There are some woody notes, spices, vanilla and as mentioned, a very slight leather tone to this soap. Nothing like El Gaucho, which is more of a unique and complex leather forward soap. I know you'll love it.

Today's product is technically a product of The Club rather than Ariana & Evans. However, I'll kind of lump it in just the same (especially considering some changes forthcoming). For a background on #ArianaEvans check out the appropriately named article; What is Ariana & Evans? Also check out my earlier review of Vetiver Magnifique which is a sort of kindred product - a #Guerlain inspired scent. Unlike the more upscale Ariana & Evans offerings, this one is of the older variety with decidedly more fragile labels and artwork that belies the upscale nature of the scent; more Keith Richards than aristocratic or elegant. Hopefully both will be addressed in a future release.

One problem with Habit Rouge is that unlike some other offerings (e.g. Vetiver or Pour Homme) which have at least a deodorant in their lines... This one does not. Naturally, none of them have a shaving soap, let alone better than a simple alcohol-n-glycerin aftershave offering. So I really appreciate this and Vetiver Magnifique. They provide an upgrade and/or some of the missing pieces to my Guerlain addiction.

Habit Rouge is a classic fragrance for men which was launched in 2003. This is a reorchestrated version of the original from 1965; the nose behind it is Jean Paul Guerlain. Habit Rouge has top notes of bergamot, lemon, rosewood (oud), basil, pimento; middle notes of sandalwood, carnation, patchouli, cedar, rose and cinnamon; and base notes of vanilla, amber, moss, leather, benzoin, labdanum and olibanum (frankincense). It marked the first use in western perfume-making of oud wood, a very precious scented resin with a warm and woody smell.

You might notice from the scent notes alone that they're nearly identical (forgiving the odd order of notes in the former). They should smell identical, yes? They do not. Bad Habits is definitely in the neighborhood, punctuating the "inspiration" of the original... But goes in different directions. Bad Habits opens citrusy and herbaceous; slightly floral as the carnation and rose creep in from the oncoming middle and a hint of woodiness further along. When the middle fully develops the woodiness from the rosewood, sandalwood and cedar are prevalent, grounded by the earthy patchouli - underlined by a light cinnamon. On the base, the woodsy vibe remains but is consumed by a warm, vanillic leather - ever so slightly green. The labdanum adds the glue, figuratively and literally (it's a fixative) with its spicy-sweet, somewhat dry, musky, somewhat leathery vibe... Tying in prior notes.

It's outstanding in its own right and clearly inspired by the original - but a clone it's not. Habit Rouge is much brighter, citrusy and floral throughout with a spicier finish. Bad Habits has a darker, more leathery overall vibe, especially on the base. It has a higher medium scent strength in the soap and splash while the original is decidedly lighter. Sillage for both is light and longevity at 3-4 hours.

Unlike the Ariana & Evans soaps, this one from The Club utilizes an older formula, lacking the "goat milk and lanolin" (two of the standout features) of the new. Performance wise, it's a notch down in density and glide, but not terribly so. It made for a damn fine shave either way. For completeness, here are the ingredients:

Hardware today consisted of the same combo as the last shave - a titanium #Stork RWD/Ti handle with a #Yaqi head with a #Feather blade on shave five. The razor head seems to have a slight centering issue, in that you have to pay more attention to tightening down the handle. One side had more blade feel than the other, necessitating some mid-shave fiddling. Even when centered, I feel it has a bit more blade feel than really necessary. While it's a Mühle R89 inspired clone, it's no more efficient in the end. Perhaps it's due to either the Feather blade (which can be real finicky sometimes) or the fact that it's essentially done at this point. Will try a fresh PolSilver next time. The stand is from #StandardRazors. The brush had to be the Vlad from #GrizzlyBay with its stark, shocking Blood Knot in 26mm. Naturally, the #GTP scuttle, the unsung hero of every shave, did its thing.

Not quite up to Ariana & Evans latest soap formula (for now) it's still a fine shave... But the raison d'être here is the excellent interpretation (not clone) of Guerlain Habit Rouge. Do I wish it were a closer match? Sure... But I don't mind its own unique vibe. They pair perfectly together and I appreciate each for what it is. Now all I need is a deodorant - but that's not happening.