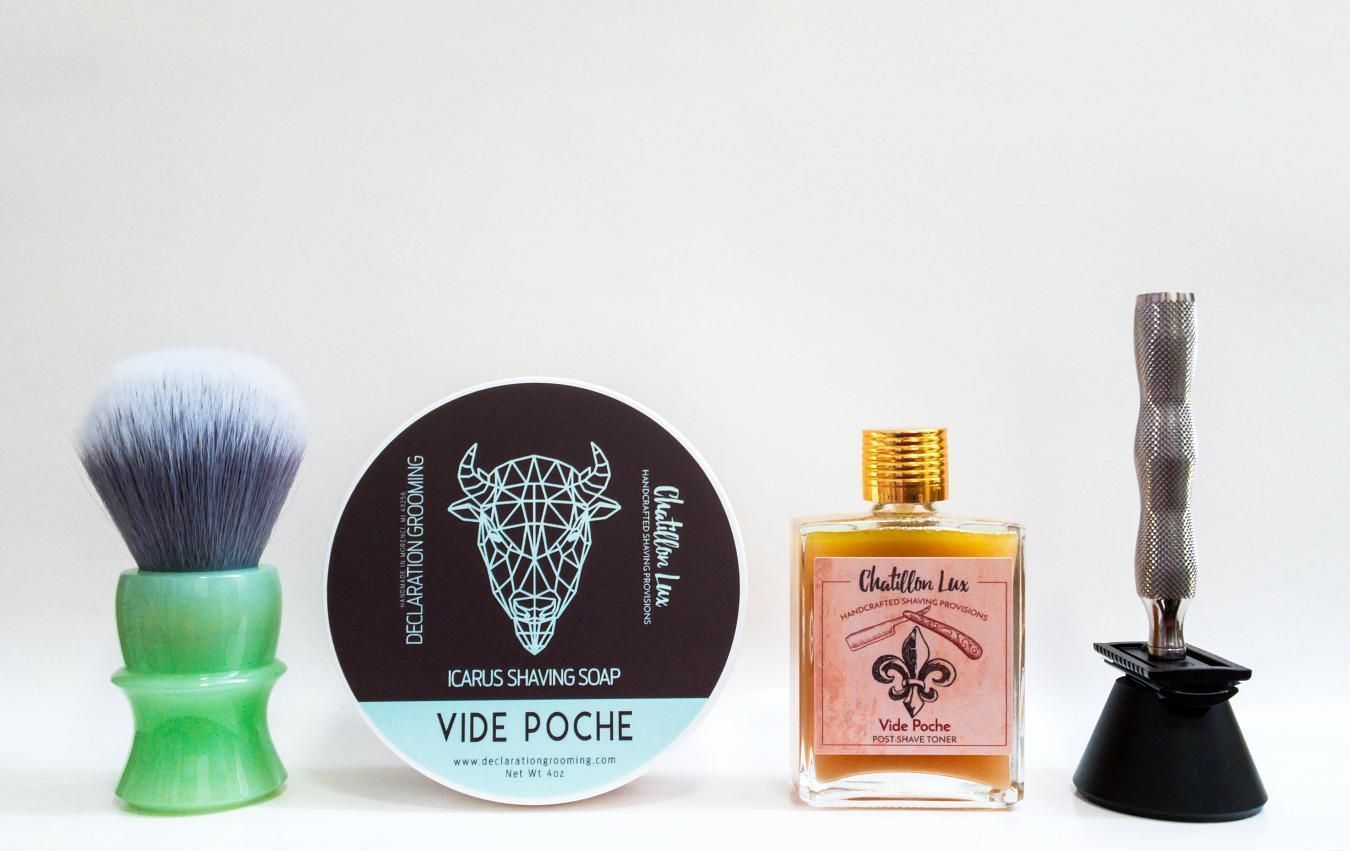 A scent from Chatillon Lux called Vide Poche in an #aftershave (toner) with a matching Icarus base #soap by Declaration Grooming - back for one run only (now sold out)!

In the early days in the trading village of Carondelet, what is now part of South Saint Louis where Chatillon Lux is headquartered, the residents of Saint Louis proper referred to the neighboring trading hamlet as Vide Poche, French for "empty pockets."

The industrious spirit and underdog mentality both inspire the artistic renaissance currently taking place in South City, as well as this scent, titled Vide Poche. This is a straightforward and simple floral blend: the type you might find on a dinner table in the Carondelet home of Henri Delor de Treget. Simple and unique, familiar yet not reminiscent of any one particular thing.

I've reviewed a lot of both #chatillonlux and #declarationgrooming (formerly #landlgrooming) here (click on any of those hashtags to see them all). What's new with today's offering is the matching Declaration Grooming soap in the Icarus base in the scent of Vide Poche. Released on August 1, 2018 together, the scent is actually a prior favorite of fans. To go with the soap, Chatillon Lux offered the usual provisions... Aftershave, Post-shave Toner and Post-shave Salve (balm). All of it was a one-time run and quickly sold out in about a week's time.

Performance of either artisan's offerings shouldn't come as a surprise (nor be unknown) to most. I will add a little below regarding the soap, but first let's talk about the scent of Vide Poche. It's a floral heavy scent with notes of honeysuckle, freesia, lavender, orange, bergamot and amber. On open you get the sweet, pungent floral of honeysuckle and fresh, green freesia with a light, slightly tart and orangey undertone to mellow out the florals a touch. The latter comes on especially towards the back-end of the top notes, gently introducing the lavender middle. The lavender slowly makes way for the resinous, warm and slightly smoky amber base while the original florals come and go in the background before ultimately leading the amber. It's a beautiful note pyramid with gentle transitions and a fantastic finish. The scent strength of the soap, either out of the tub or lathered as well as the toner is a fair medium. Sillage of the latter is subtle as is the longevity of 2-3 hours. This is a great warm weather scent.

The first Icarus based soap I've reviewed in-depth was Santal Auster when it came out. If you've been living under a rock and/or wondering just what this soap base is, check out What Is Project Icarus?" over on the Declaration Grooming site. Unlike that first release in Santal Auster the base has been slightly tweaked to downplay the "gamey smell" and used in a trio of releases on June 29, 2018. While there's still a slight smell, it's markedly better now. Not the only soap to do this; my review of Mickey Lee Soapworks Drunken Goat noted that the goat's milk was an issue there as well. To vanquish any wayward smells, leave the tub open a few hours and/or just lather it.

Regardless of version, one thing has remained the same... Absolutely top-notch shaving performance. This base is squarely in the top tier. Easy loading and lathering, cushion, slickness for days and excellent skin feel. It's better than the Wholly Kaw donkey milk soaps, easier to load and lather than Barrister and Mann Reserve, easier to lather in hard water than Saponificio Varesino Beta 4.x and slicker than Talbot Shaving. I'd peg this, overall, for the number one spot or at the very least, high in the top five.

Hardware today consisted of a #Yaqi Matte Black Color Safety Razor Head w/o Logo (costing a whopping $3 USD quantity one!) fashioned from zamac atop a titanium #Stork RWD/Ti handle. With recent expansion of my head and handle options aside from complete razors, mixing and matching is pure joy of late. Pleased to say that this combo performed amazingly well. The head is a bit of an offshoot/clone of the Mühle R89 head (likely one of the most common heads out there today)... It's got a bit more blade feel but the end result is fairly similar. The blade was a #Feather on shave four. The brush is from #ThatDarnRob in his popular Milkglass resin (technically closer to sea glass). Most choose a natural badger brush but I thought the novel SilkSmoke knot in 26mm size would complement the light pastel and washed-out theme nicely.

This is some seriously good software, all around. The Vide Poche scent, light and beautifully delicate, is much like Santal Auster in that I wish both the scent strength and longevity were better. As for the soap, the gamey smell remains but it's so light as to be of no concern, and the performance is outstanding by any measure. Regardless of any concerns, which are truly minimal, this stuff is among the best in the business.