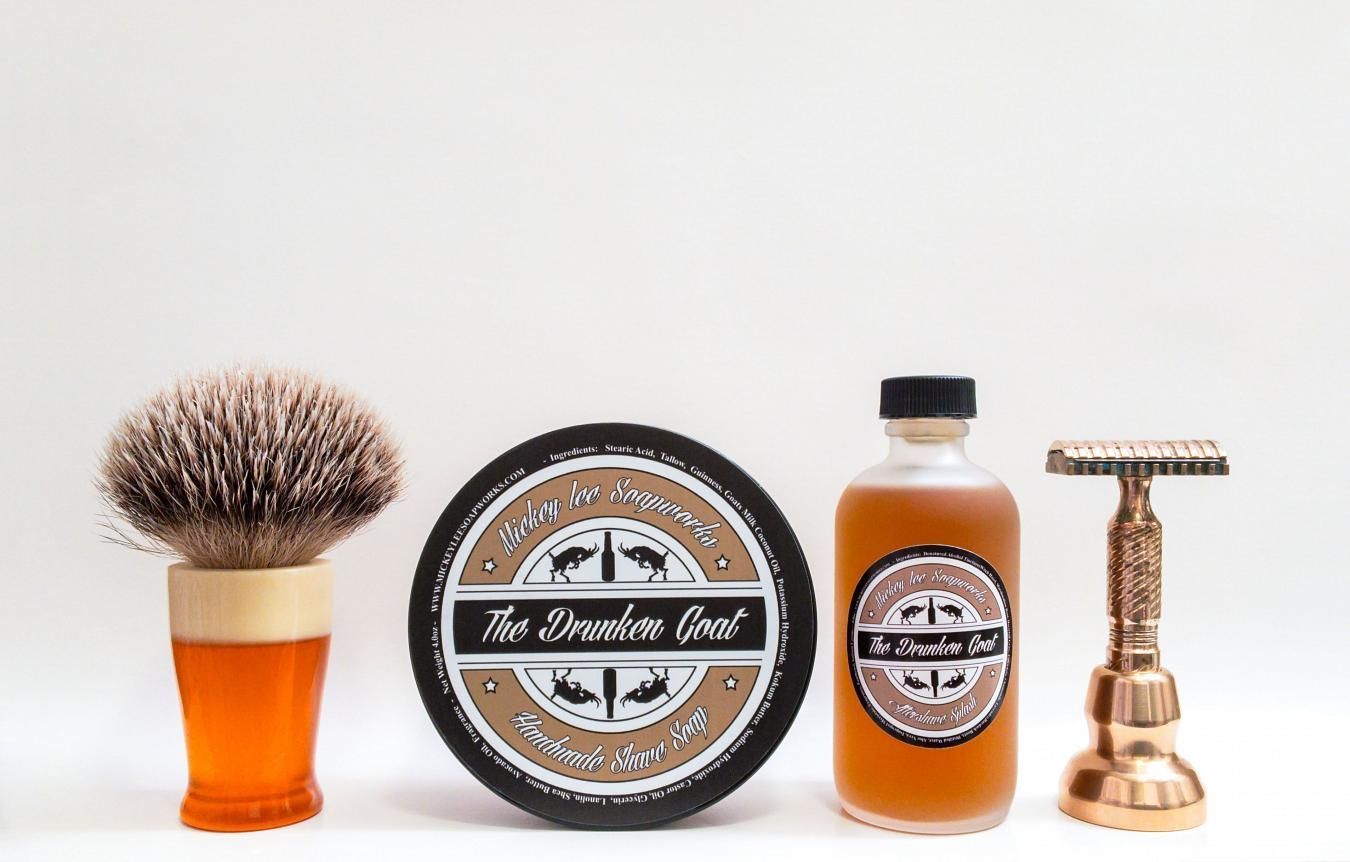 Top o' the mornin' to ya - ya ol' drunken goat! Drunken Goat by Mickey Lee Soapworks in a #soap and #aftershave that is - and a first look at a bronze Timeless Razor with verdigris!

I've done extensive reviews of countless #mickeyleesoaps (click the hashtag to browse them all) - so check them out for more information as far as performance goes. Today I'll just talk about the scent and difference in performance over their other soaps. It's actually the first and oldest soap in their lineup and made its debut (first on Reddit) in late summer of 2014. Drunken Goat is an interesting scent; it's a semi-sweet and gourmand, yet not what you might expect. It has notes of chocolate, oats, molasses and chestnut.

Overall you get a good hit of chocolate, but it's tempered by the oats and chestnut. Indeed, a bit like a cookie. The molasses sweetens things up a notch - but in more ways than one... As does the actual Guinness beer that's used in the recipe (though it doesn't add too much to the scent) and the goat's milk - all making the soap behave a bit differently from their other soaps. The reason is... Sugars. Which can make for a creamier/stickier lather and more bubbles (fluffier). I talked to Sam about it, and she adds this:

Here's a bit of trivia, I didn't know about this until after I had started making Drunken Goat... There's a small percentage of people that can pick up on the ammonia that cooked goat's milk gives off that can make it smell rancid or like barf. This is due to milk sugars in the soaping process increasing the heat of the product. Usually, this scent goes away within a few days of curing, but some people with very sensitive scent receptors can pick up on it regardless. Kind of like how some people's pee smells bad after asparagus consumption, not everyone gets it, but some do...

So back to the difference in performance. As mentioned, all the sugars make the lather creamier - yet fluffier as well. It's not quite as flat as the other soaps (which isn't a bad thing in this case) as it's minimal and boosts the cushion. The goat's milk is also unique to the Drunken Goat. Because of the chance of off-putting scent involved, it won't be used in the other scents... But it's well masked and works with Drunken Goat. I know I didn't smell anything "off." The benefit of course, is the skin food and feel it adds. It makes this a wonderful soap for people with dry or sensitive skin, and it's also perfect for healthy skin that wants to stay that way. It won't dry out your skin like other soaps and adds moisturizing qualities. It contains alpha-hydroxy acids (such as lactic acid) which help remove dead skin cells. It also has many vitamins, but is particularly high in Vitamin A, which is necessary to repair damaged skin tissue and maintain healthy skin.

Overall, if you want the best performing soap from Mickey Lee Soapworks this is it. Not that the others are lacking in any way; they just substitute coconut milk for the goat's milk and lack the additional sugars. But because of them, Drunken Goat just goes a step further, and it is noticeable (or at least, I did - having about a dozen of them)! A sweet gourmand scent might not be everyone's cup of tea, but I find it wonderfully done. More for the cooler days. While the scent strength is a relative medium, the longevity is a good 6+ hours.

Let's talk about the hardware! This is a standard #TimelessRazor #TRBR78 in bronze, rocking an #Astra blade on shave three... However, I've begun forcing a patina on the bronze. You'll see the general darkening of it along with a blue verdigris especially on the base plate in the photo above (click it for larger) and below. This is the result of a chemical reaction to the copper in the bronze. Soon, the entire razor and stand will look like that! The latter is what it looks like when left to patina naturally (it slowly darkens a bit and may develop spots that are darker still). Once it's all finished, likely this weekend - I'll post again with more details. This makes the razor look like an ancient relic fresh off a dive off the coast of Greece - or something... I dig it. 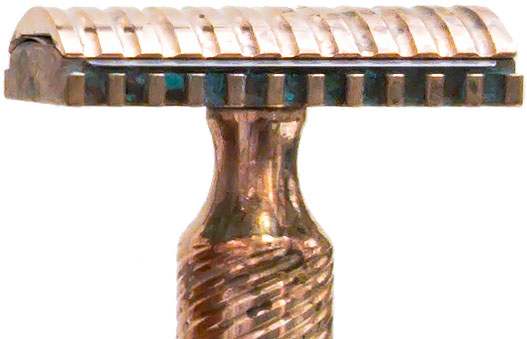 The process is not damaging to the metal as it's just a coating, and can be polished off with something like Nevr-Dull (which I use on all my polished razors). I preferred this look, as it's more complex and interesting. There are other patina processes that you can use that simply darken the bronze - even to near black; also a very cool look. Stay tuned!

The brush is a classic (and unique) offering of #ThatDarnRob resembling a beer... Fitting for a Friday and for software called Drunken Goat I would say! It sports a 20mm silvertip badger knot (that's more like a 22mm and in a 24mm hole). It certainly feels like a 22-24mm knot; it's a bushy sucker, and oh-so-plush. The #GTP scuttle played its part again today.

Killer Friday shave here, people! Loving the 'Goat both in scent and performance. For Mickey Lee Soapworks fans that know how the soaps handle, you should be able to pick up the slight differences with this one. I don't know why it took me until now to finally pick it up. I wish I'd done it sooner!