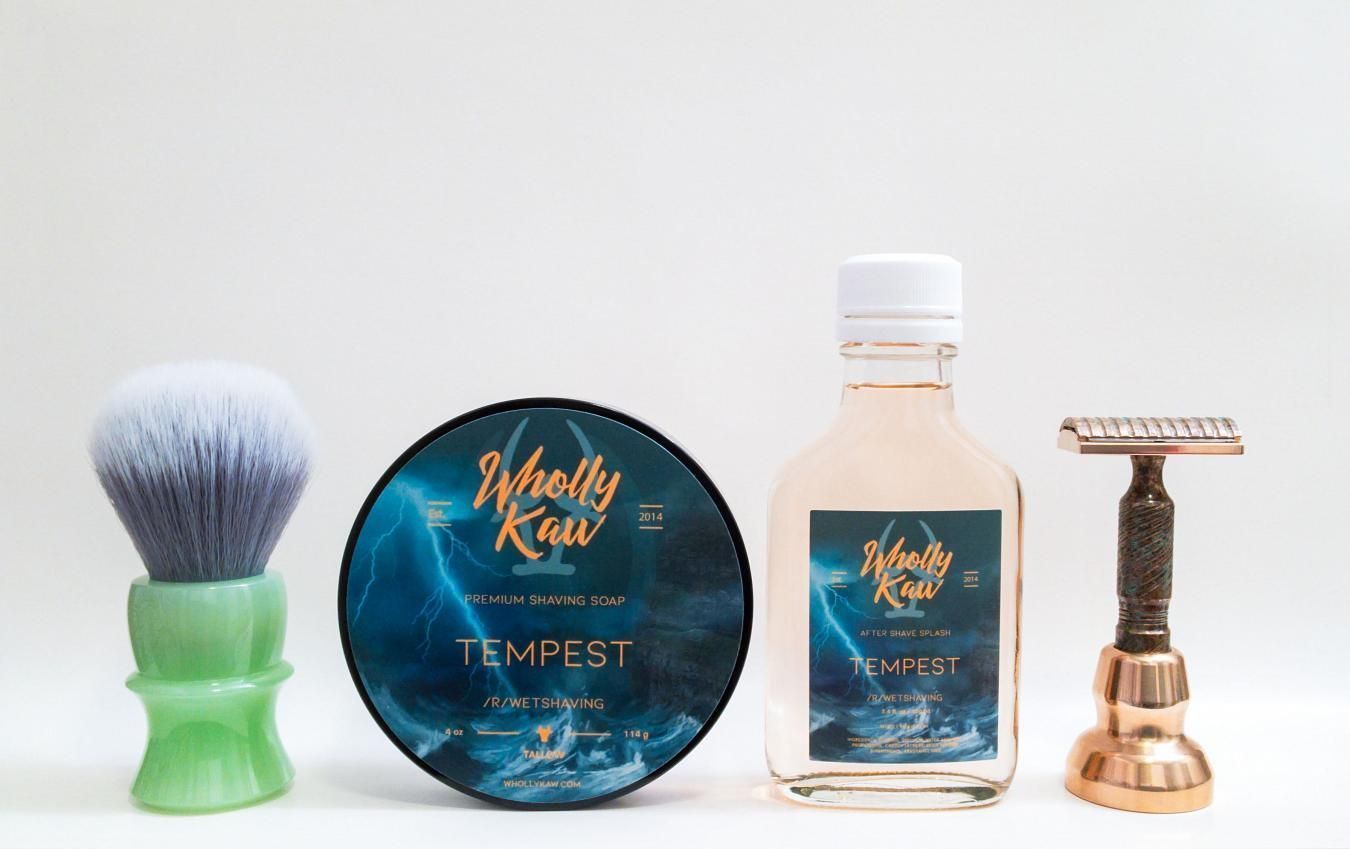 A polarizing scent in this Limited Edition release by Wholly Kaw called Tempest in a #soap and #aftershave combo. Is it aquatic - or not?

Straight from the throne of Zeus himself, comes Tempest, a mix of Ozone, Rain and Birch Tar. This is the how we imagine the air around the King of the Sky and Thunder smells like.

Immerse yourself into the aquatic scent of the rain, walk through while the lightning strikes all around you, scorching the damp earth beneath your feet, and emerge smelling like the true King of the Gods

I've reviewed several of the latest "donkey milk" releases from #WhollyKaw (click the hashtag to browse them) as well as reviewed Merchant of Tobacco specifically, so I won't get into any of that today. I'm of the opinion that it's arguably among the best bases on the market right now. It's a fairly "hard" soap, so easy to load and drama-free, has excellent performance in terms of lather generation, cushion, both primary and residual slickness and finishes off with a great face feel. The alcohol-based aftershave is no slouch either, providing some measure of healing and moisturizing properties, but nothing like the toner. The packaging is in the Wholly Kaw tradition, yet somewhat different. The labels feature more visible artwork behind the text and the aftershave bottle is more like those of other artisans, rather than the usual round amber bottles.

So let's talk scent. First, this was a limited Limited Edition for a Reddit group, with the pre-order open from March 26 - April 6, 2018. They just began shipping late last week. Tempest was billed as an aquatic fragrance and while some say it is... I believe they are mistaken. First off, the notes include ozone, rain, birch tar and dirt. That's right - dirt. This note was not listed officially, but it's in there. And looking at these notes, there's nothing outside of ozone that supports a traditional aquatic fragrance... Which is what? Essentially one that contains one or more "marine notes" including sea water, ocean breeze, algae, sea weed, drift wood, sand or yes, ozone. They're usually citric or floral if they're male or female oriented, but not necessarily. Some even lean towards "suntan lotion" or coconut, etc.

Of course, it should be noted that if you ignore the artwork a moment and read the description carefully that "aquatic" is only mentioned in relation to the rain note; perhaps being implied somewhat for the ozone. But neither birch tar nor dirt have anything to do with the sea or aquatic fragrances and to my nose, they're the strongest notes.

That is the polarizing part. The soap in the tub and lathered smells like petrichor and wet, dank earth - and is perhaps the strongest one I know, including Barrister and Mann Petrichor which is fairly "pure" and more like the dirtier Mickey Lee Soapworks Réunion but without the green components. Others add more flavor to it in either direction; for example, Chiseled Face Summer Storm is more grassy while PAA La Tierra Mojada is more floral. This one is somewhat ozonic, earthy and wholly geosmin. Let's look at each of the scent notes; ozone is unique - sharp and somewhat fresh. Rain is essentially petrichor/geosmin and where some of the "damp earth" comes from. Birch tar is strong, phenolic and somewhat smoky with a sweet, ambery-balsamic-resinous undertone. Finally, there's dirt. It smells... Like dirt. Combined with the rain, you get the aforementioned wet, dank earth smell.

So where is the dichotomy coming from? I suspect that some people aren't as sensitive to "dirt" (which can be smelled in parts per trillion) or petrichor/geosmin, don't know what they're talking about when it comes to scents or are basing their opinion purely on the fresh application of the aftershave... Which contains a decent amount of menthol. When freshly applied, the menthol does brighten up the fragrance considerably and at first glance, may indeed come across as slightly aquatic... But it's quite fleeting, as once the menthol burns off, it's straight back to wet, dank earth. That said, the aftershave scent is overall lighter than the soap. Sillage is very slight and longevity fairly short at 2-3 hours. If there's any doubt, in the past week I've seen no less than half a dozen people immediately post their combo for sale on various forums without even using it. Personally, I love the scent! I'm a fan of petrichor, and this one rocks it - hard.

Hardware for today consisted of the #TimelessRazor #TRBR38 with an #Astra blade on shave three. I swapped out the more aggressive base plate of the TRBR78 which is why it's shiny and bronze looking, rather than the heavy patina and verdigris look of the rest as detailed here. The brush is a lovely milk glass piece from #ThatDarnRob with a SilkSmoke knot in 24mm. I was going for a sort of "ghostly" look to match the handle and I think it worked out perfectly; and it's a fine knot! For a comparison, check out the Understanding Synthetic Knots article. The #GTP scuttle did its thing.

So yeah... Aquatic, no - wet, dank earth - yes. I suppose if you focus purely on the ozone (which is used in some aquatic scents) or base your assessment of the fragrance on the freshly applied aftershave, which is colored heavily by the (fleeting) menthol... Then maybe. But when dried down, even a little (or the soap outright) it's petrichor/geosmin all the way. It's possible some noses just don't register these notes (usually accompanied by a complaint that the scent is weak, when it's really not). Again, personally - I love it; as should any fans of this genre. But it seems more than a few do not.

Great review! I love petrichor too.

Thank you! Yeah, huge fan of it myself.