In the past few years, synthetic knots have really come into their own. While companies like Mühle (and by extension, Edwin Jagger) really started pushing the envelope early on - they're widely available now from countless sources. Perhaps the one brush that really ignited the movement was the Plisson brush. Shortly after, and seeking to address early complaints (e.g. lack of backbone or "floppiness") came knots such as the Gamechanger and BOSS but it was the Tuxedo that really piled fuel on the fire. All of these latter knots are essentially sourced (fairly) direct from China.

Below you'll find a handy table to help identify the various synthetic knots and their characteristics. A lot of questions concerning them come up repeatedly on various forums and social media... So hopefully this will "shed" some light on them!

Coincidentally, you can find a serious amount of shaving brush artisans on the Wet Shaving Links page, under the "Hardware & Misc." section (lower left of the page).

For most of shaving history, people have used natural fiber brushes made from badger, boar or even horse. The biggest complaints are expense, delicate nature, time to soak and dry, funky smells (at least when new) and the fact that they're not vegan friendly. Synthetic brushes overcome all of those issues, offering:

Of course, it can be argued that no synthetic brush, regardless of specification, can match the true luxury of a real silvertip badger brush. In a lot of ways, this is true. It's up to each individual to weigh the pros and cons of each variety and hopefully try at least some of them - and come to their own conclusions. But that's beyond the scope of this article.

NOTE: This chart is a work in progress - suggestions welcomed!

Still to be added, are the obvious commercial offerings including Mühle Silvertip Fibre & Black Fibre (Edwin Jagger uses these) and Kent/Simpson but also the likes of Whipped Dog, The Golden Nib, Wolf Whiskers/Nathan Clark (Envy Shave) Timberwolf & Übersoft which essentially all source from Yaqi, Oumo and both Alibaba and AliExpress at large... But these are the most commonly seen to start off with. Each vendor/artisan likes to name these knots their own way; while the names differ, they're invariably the same and from the same manufacturer. They just don't want you to know from whence they came.

Recent new additions include the Motherlode, Synbad, Ghost and SilkSmoke. The Motherlode knot is the densest, plushest, softest knot out there, bar none - but... It is actually a modified makeup brush knot rather than a purpose-built shaving knot. Thus the somewhat odd coloring (which is improved in v2) and the dense, super fine fibers, which are meant for powder - not lather. The Synbad combines characteristics (e.g. the backbone of a Tuxedo with the soft face feel of a Cashmere). The Ghost is all white (countered by an as-yet unnamed all-black version). These both have a ton of backbone and heavy, deeply crimped fibers... Think of them as "boar plus" in that regard. These look the most (obviously) synthetic. Not to be confused with the all-white/black knots used in The Holy Black and Satin Tip brushes, which are much, much softer. Then there's the Silksmoke knots with a silver/grey and white instead of the similar looking black/white Tuxedo (or the reverse) knots. It's purported to be a little bit softer, however.

Speaking of the Tuxedo knot - the color options have since grown. There's the relatively new Blood knot in red/black... But in fact, there are now four colors altogether; the other three are just newer and currently less popular. The thing to keep in mind is that they're all essentially a Tuxedo knot as far as characteristics - merely in different colors. Here's a sampling, with cool matching handles (via Leo Frilot): 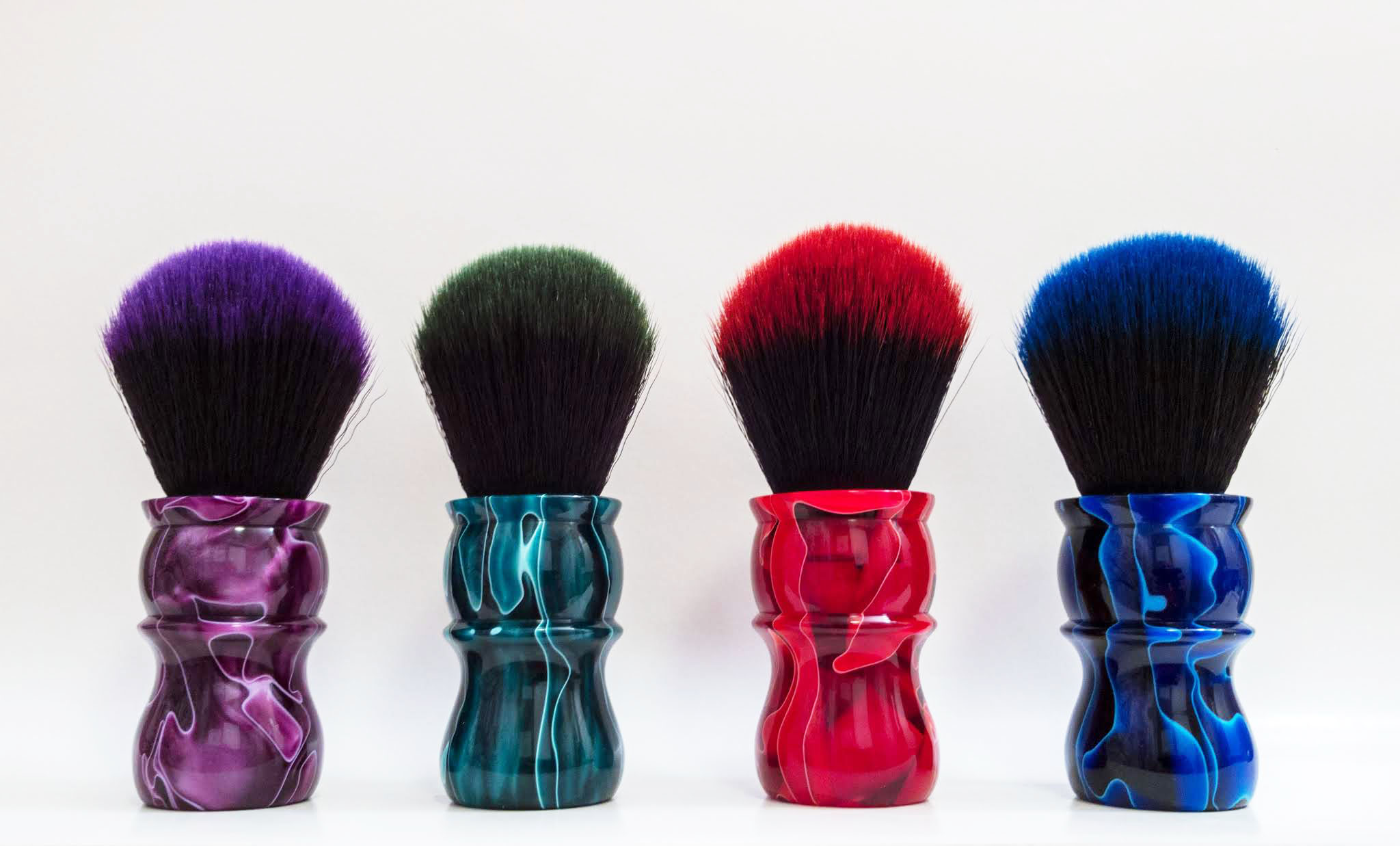 METRICS:   Density is a measure of how many fibers there are in the knot; how packed it is. Backbone is a measure of how stiff the knot is (generally) but is subject to the loft height set by the brush maker. Softness is a general measure of face feel and is affected by backbone, loft height and actual fiber specifications (width and taper) - in the context of this chart, it is more a means to compare one knot against another.

The knots are generally made of Taklon fibers. It's actually an interesting synthetic fiber... It's polyester and tapered to a point (much like what Mühle has been doing with the Silvertip Fibre or more especially, the Black Fibre "Rytmo" brushes) ranging from 0.08 mm to .15 mm, which mimic hair, to .20 mm which is closer to a boar bristle and what I suspect these are closest to (because of the backbone I mention above). The variation in diameter creates more space between the filaments, allowing the brush to carry more liquid, and of course makes it more life like and in fact, it was designed to mimic sable. Naturally, its synthetic nature has the same benefits as others; it's animal friendly, more hygienic and dries much faster, requiring no soaking or having a funky smell. Interestingly, it is generally available in white or gold colors, with white Taklon being considered the most pure form and usually displaying qualities superior to dyed. While originally invented by DuPont, the rights and process were later acquired by Toray Chemical Co. of Osaka, Japan.

Some overseas purveyors of knots are saying their knots (like the Tuxedo) are BASF synthetic fibers. While this hasn't been corroborated, it's highly likely that it's BASF Ultradur - which is made of PBT (polybutylene terephthalate), a thermoplastic, semi-crystalline polymer, and a type of polyester. It's used in a huge variety of products (including filaments); check out this brochure (PDF). The Omega HI-BRUSH (badger effect) and S-Brush (boar bristle effect) synthetic fibers on the other hand, are definitely made of this PBT material... So it's quite possible. These filaments are corrugated as to improve the performance of the brush in terms of holding and releasing the lather during the shave and are chemically tapered to give a soft touch on the skin.

Finally, there's one more thing that synthetic knots offer that natural hair does not... A huge variety of colors in addition to all the various characteristics. As alluded to above, they come in black, white, grey, red, green, blue and purple, somewhat reddish/brown, cream colored... The list goes on, and new ones are being developed by the (primarily) Chinese manufacturers all the time. Here's a sample showing a variety of knots and an equally dazzling bunch of colored handles (it just so happens the handles are all a "3D resin"):