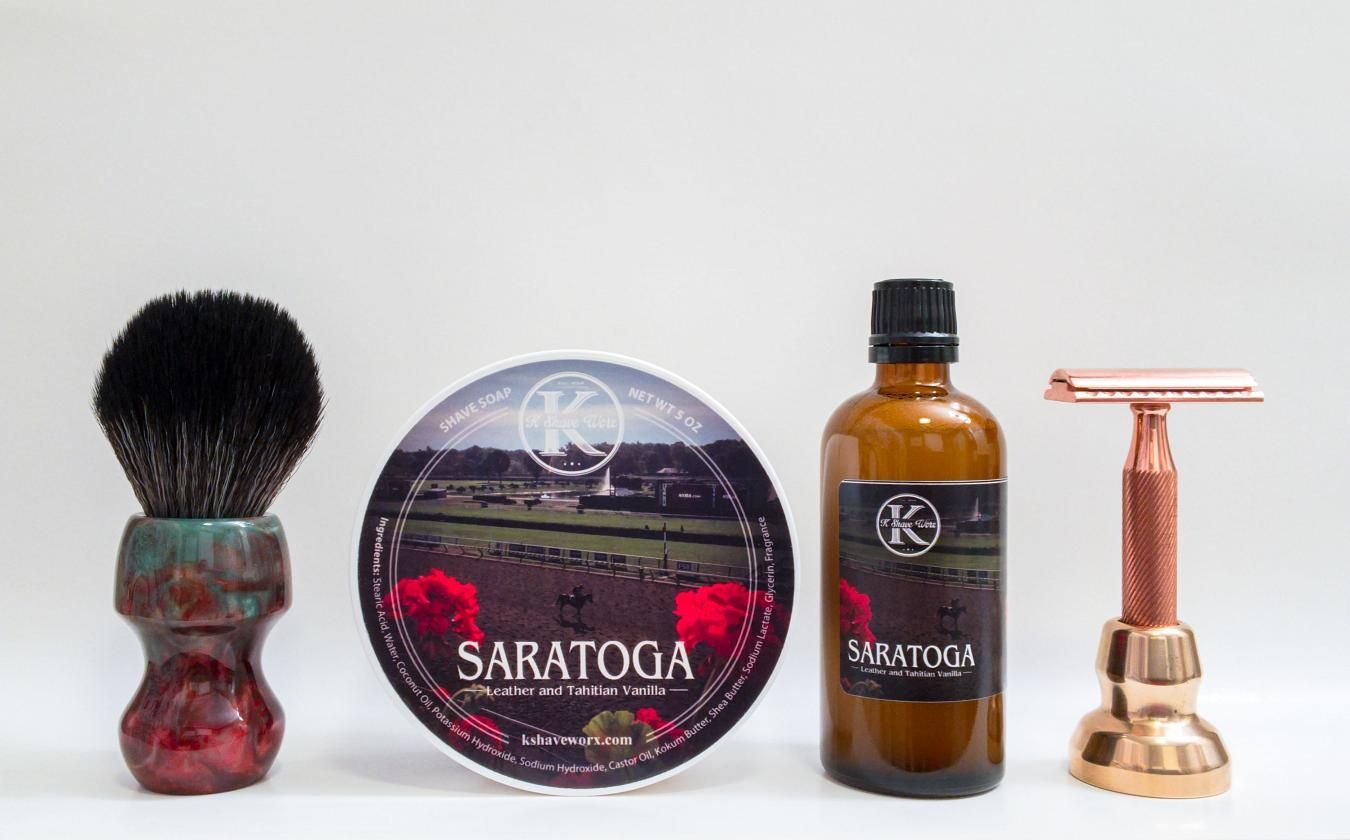 Totally feeling a horse town vibe with K Shave Worx Saratoga #soap and #aftershave combo - inspired by none other than Saratoga Springs, NY.

With the pivotal battle of the Revolutionary War in the fall of 1777, famous horse racing since 1863, and the healing mineral springs, Saratoga has a lot going for it. Add in that Kevin and Kelly met and later were married in Saratoga and reside only one town over in Ballston Spa. With the city's motto of "Health, History, Horses" we'd like to add one more thing to it... "Home". This awesome scent is a blend of Tahitian vanilla was notes of rum and coconut and a great leather scent.

I've had this soap on my radar ever since the K Shave Worx Spring 2017 Releases. I even snuffed the tub at Pasteur Pharmacy numerous times but never quite took the bait. With an actual move to Saratoga Springs, NY on the horizon - it was time to take the leap. How could I not?

Officially, Saratoga has notes of Tahitian vanilla, (butter) rum, coconut and leather. That seems deceptively simple and three of the four notes have you wondering what they could possibly have to do with horses or Saratoga Springs, NY (you might say it's a horse town). Yet oddly, taking in a good huff of the fragrance and I'll be damned... It smells like a cross between a paddock and a tack room (in a good way)! I immediately got the sense of horses; obviously the leather - but the other notes somehow give you a sweet hay/straw and wood barn vibe. It's weird, it doesn't make sense... But if you're not familiar, you probably wouldn't make the connection. I had to know for sure - and in speaking with Kevin, he confirmed my suspicions and says of it:

When I was experimenting with the leather to find a pairing I tried it and loved it. For me it was the leathery smell of the tack room and the clean elegance of the vanilla reminded me of maybe a drink or perfume that maybe one of the high rollers may have had. I couldn't quite put my finger on it but it had a familiarity that hit it for me.

The first thing to hit you is the rum and coconut. But the notes blend so well together that it essentially remains homogeneous rather than distinctly tiered. Underneath the top notes of rum and coconut, you get hints of the leather, but it's warmed and colored by the Tahitian vanilla. Slowly, the latter two notes trade places with the top two - making a base of vanilla and leather. Sillage is light, but longevity is good at 6 hours.

Performance is interesting, and I offer this note - beyond the usual I post in #KShaveWorx reviews. Between this shave and my last (with K Shave Worx made Tampa Shave Company E&J Vanilla) there's something about the lather density and glide. I'm pretty sure I've mentioned this before, but a lot of soaps really benefit from overloading, even a bit. Soaps like MdC and Proraso but also K Shave Worx. The lather today was wonderfully thick and slick... But especially slick. I was tempted to think that perhaps they had tweaked their formula, but while E&J Vanilla is fairly new - Saratoga isn't. In fact, this soap is of the K Shave Worx Spring 2017 Releases vintage.

Hardware today was the #AboveTheTie #Windsor razor rocking a #Feather blade on shave two. Like my first shave with the Windsor it was sublimely smooth and efficient. This razor shines with fresh(er) blades for sure. Perhaps that contributed to the feeling I got with the soap... Either way - it was smooth as glass. The brush, also in matching colors for today's theme is from #WildWestBrushworks and called Holly (technically a "Christmas brush") with a 24mm BOSS knot. Finally, the #GTP scuttle did its thing, which ironically, in its "hamada" (reddish brown) glazing also fit the theme.

Awesome shave today! Everything performed wonderfully and I got a really nice, close shave without any drama - as it should be. The scent of Saratoga is an interesting one. It's like surrounding yourself with quintessential tropical scents but then taking an interesting turn with leather. To me, it definitely reminds me of horses. It shouldn't work - but it does.