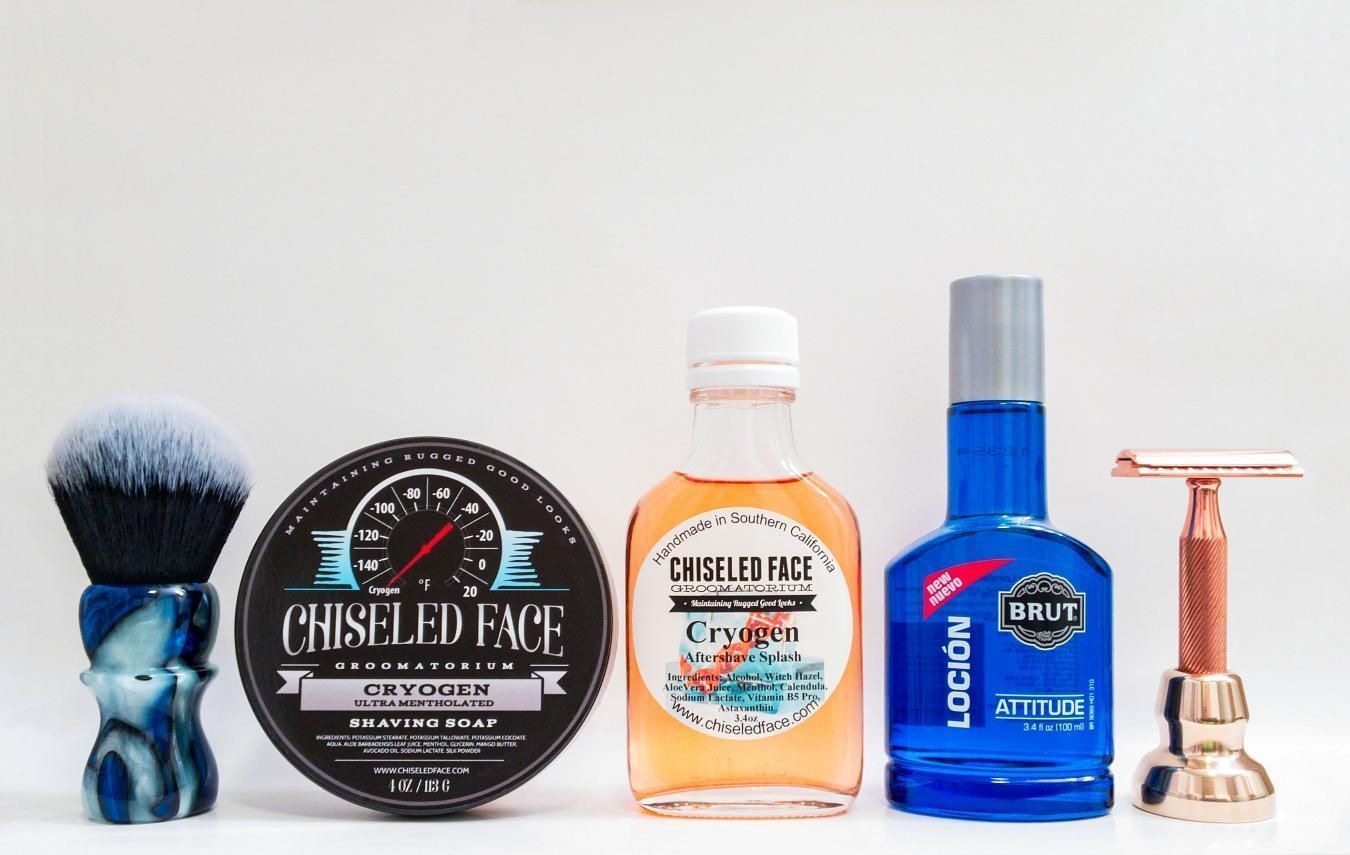 This IS the chill you're looking for... Chiseled Face Cryogen #soap and #aftershave with a Brut Attitude chaser. Wusses need not apply.

This is not your average aftershave. This is Cryogen. We took the comfortable level of menthol in our other aftershaves and multiplied it by eleven. This will sting and make your eyes water. Some say it is not even usable, but we like it...

This is not your average soap. This is Cryogen. We put a ridiculous amount of menthol in here. So much menthol, that no other scent could be added – the soap recipe just couldn’t take any more additives without breaking down. This will sting and make your eyes water. It might even make your lips go numb. Some may say it is not even usable, but we like it...

We believe this is the coldest stuff on the market, but if it isn’t – someone out there is crazy…

I've actually done extensive reviews of Cryogen here and here previously, so I shant repeat. Suffice to say that this is more than likely the coldest soap and aftershave out there (with perhaps the exception of Barrister and Mann Arctique which is fairly close). This offering from #chiseledface leaves nothing to be desired... Except maybe scent - there isn't one. You wouldn't smell it anyway. While Arctique has some, the menthol pretty much puts it not only in the background, but the back of your mind. The chill is front and center. This stuff rocks!

Just a brief note on the rating chart above. The packaging got a mixed review, as you can see in the photo - the soap is the new packaging whereas the aftershave is the old. The new packaging and branding is outstanding. So while I took a point off here, all the new stuff gets a full above average rating. Also the scent... I couldn't rate the quality or the longevity as there simply is no scent. This is menthol, the whole menthol and nothing but the menthol. Plan to use another scent when you're done shaving. In fact, I went with Brut Attitude which is not reflected in the chart.

You need to load this soap a bit heavier than usual because of the menthol. The soap loaded up easily and produced copious amounts of somewhat lighter density lather, providing a nice cushion and outstanding glide and secondary lubricity. That said, the high menthol content makes it a bit unstable. You'll need to whip it up again between passes if using a scuttle, or work it a bit more on your face if not. Other Chiseled Face Groomatorium soaps don't have this issue; it's purely the menthol in this case. Seriously, you can see the crystals on it when it dries. The face feel of both the soap and aftershave is at the high-end of average but it really teeters on above average.

Since Cryogen has no scent (there's no room for it!) I decided to follow up with Brut Attitude aftershave, which was manufactured in Mexico - it's unfortunately discontinued... Thus the Spanish on the glass bottle in a 3.4oz./100ml size. I'm disappointed that you can't get it anymore; it was dirt cheap (<$6) and better smelling that most OTC aftershaves (but my real love is the green classic). What does Attitude smell like, you might ask? Clean and fresh, somewhat aquatic - think Mennen Skin Bracer. The scent strength is impressive at a high medium with a surprising longevity of 4+ hours. It has just a bit of menthol to keep the party going. Here are the ingredients for posterity - they're fairly simple:

Hardware for today included the #AboveTheTie #Windsor in Tellurium Copper 145 with a CR1 baseplate and a #PolSilver blade on shave three. The brush is an appropriately themed piece from #WildWestBrushworks sporting a 26mm Tuxedo knot and finally, the #GTP kept the ice cold lather sublimely warm. Quite the dichotomy.

This software combo really doesn't get enough play. I'm sure I've shaved with it more times than indicated... Just one of those things when you've got way too much software. But now that the weather's heating up (with an equal rise in humidity) we'll need to fix that situation. Be sure to check out #MentholWeek for more of the chilly stuff, albeit slightly dated.