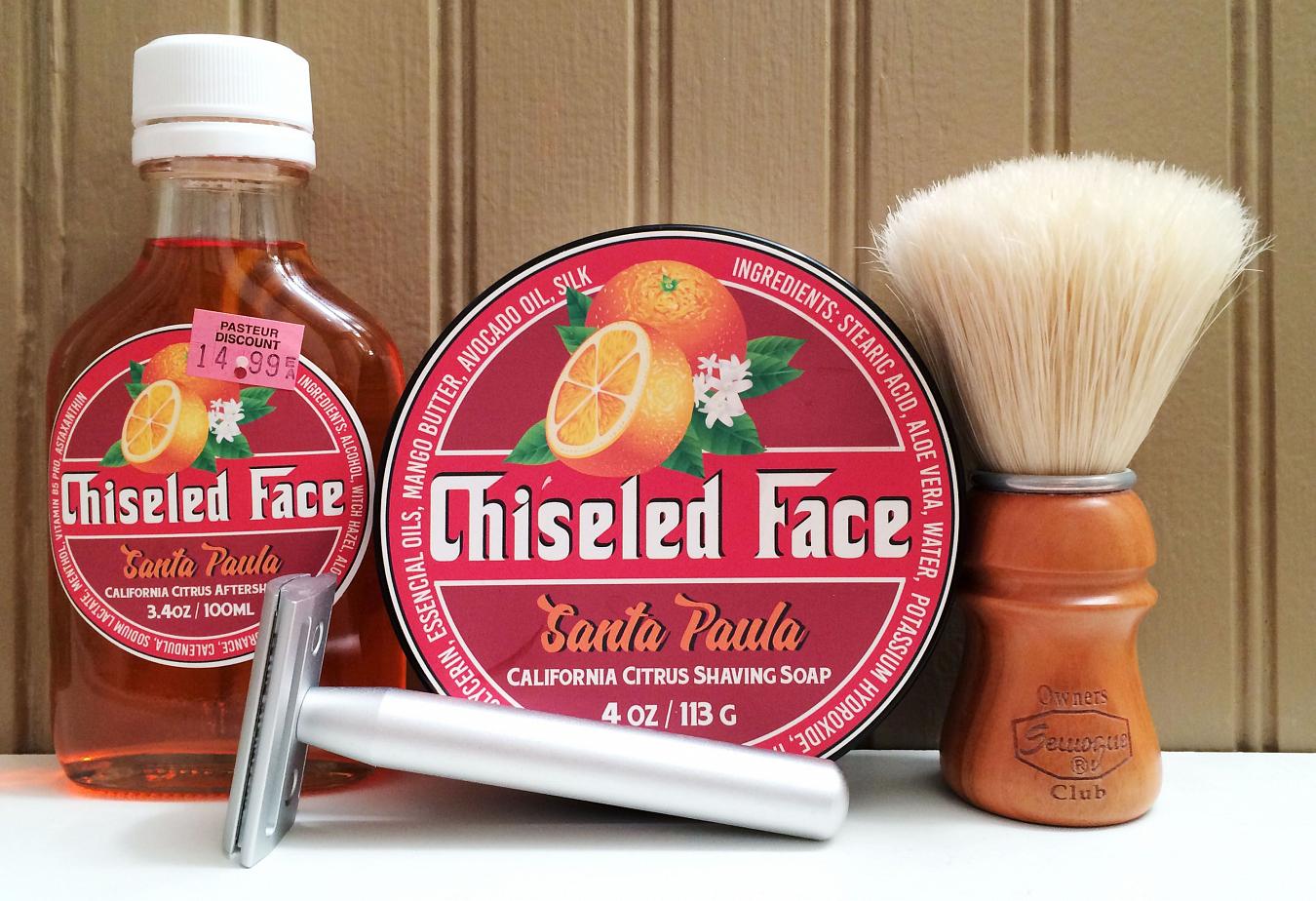 Today's SOTD is brought to you by the latest addition to the den... Chiseled Face Santa Paula Citrus #soap and #aftershave! Bringing the orange grove to your bathroom...

I missed out on the re-release of Orange Creamsicle recently - a scent which honestly, really tickles my fancy. I've never tried it, but from what I understand it's not the best version of this scent. For that, you might want to try The Holy Black Trading Company Ramos Gin Fizz - which I have tried - and yes, they totally nailed it! So I don't feel quite so bad having missed out... In fact, it gave rise to this happy accident. While at Pasteur Pharmacy in NYC last week, I struck out on my main quest - but deciding not to leave empty handed, went for the #chiseledface Santa Paula Citrus combo. I remember when it was released and being a sucker for citrus software, it immediately caught my attention. I never did get it - until now. And I'm glad I did! I already have Summer Storm so I knew what to expect performance-wise.

The soap performance is typical of Chiseled Face; it loaded up easily and produced copious amounts of somewhat lighter density lather, providing a nice cushion and outstanding glide and secondary lubricity. Really a nice performer. It left my face feeling soft and moisturized - the scent strength is on the lighter side of medium, but lovely... In the tub it's deceivingly light, but blossoms once lathered. Some of the ingredients are quite choice, and explain the face feel - such as aloe and glycerin, mango and avocado as well as silk. Overall, the ingredients are fairly simple though:

The aftershave was also a treat. It went on nicely; no tackiness whatsoever. My skin felt truly smooth and soft, and the menthol was a nice bonus. I also appreciate the fact that there's no alum in it, which was novel "back in the day" but really doesn't belong in an aftershave, IMO. It only makes the skin feel a bit dry and tight. The scent strength is a solid medium, maybe even a touch more. The full ingredients are:

The big question then, is how's the scent? The scent is described as having notes of petitgrain, siberian fir, bitter orange, clary sage, litsea cubeba, siam wood, and cedar. On a higher level, it's an inspired scent:

Santa Paula, CA is a beautiful little town, known as the Citrus Capital of the World. Several years ago, I spent a couple months there and fell in love with the orchards that stretched in all directions. This is my ode to them.

...which I would say is pretty accurate. While I've never been to Santa Paula, I've spent a fair bit of time in and around the orchards in Florida. The scent definitely transports you there. On open you get the full bouquet of citrus; not the bright, sugary orange you might think of, but rather more of the peel; the zest. Thanks to petitgrain and bitter orange, which as you might expect - is on the bitter side, while the litsea cubeba sweetens things up again a bit. A nice interchange of related notes. The citrus is further balanced by the siberian fir, siam wood and cedar which give it that woodsy feel and thus the "orchard" accord vs. a simple citrus medley. On the dry down, the clary sage adds to the warm, balsamic siam wood and comes out more as the citrus fades away. Being quite volatile, citrus oils generally don't stick around for long. Indeed, the fragrance of Santa Paula Citrus therefore has a relatively short longevity. I got a couple of hours out of it.

The hardware for today consisted of my now standard... #StandardRazors razor which was fitted with a fresh #PolSilver blade today. Good thing, as it made cleaving the four days of Labor Day weekend growth effortless. The #SOC brush seemed a fitting choice to mirror the woods in the scent, and the lather was whipped up in my trust #GTP scuttle.

Overall, I'm very happy with the Santa Paula Citrus combo! The performance one can expect from Chiseled Face in lather and scent. The value is high as well, as both the soap and aftershave run you $14.99 each. If you're a citrus fan, I'd definitely suggest giving it a try; samples are available and generous in size.