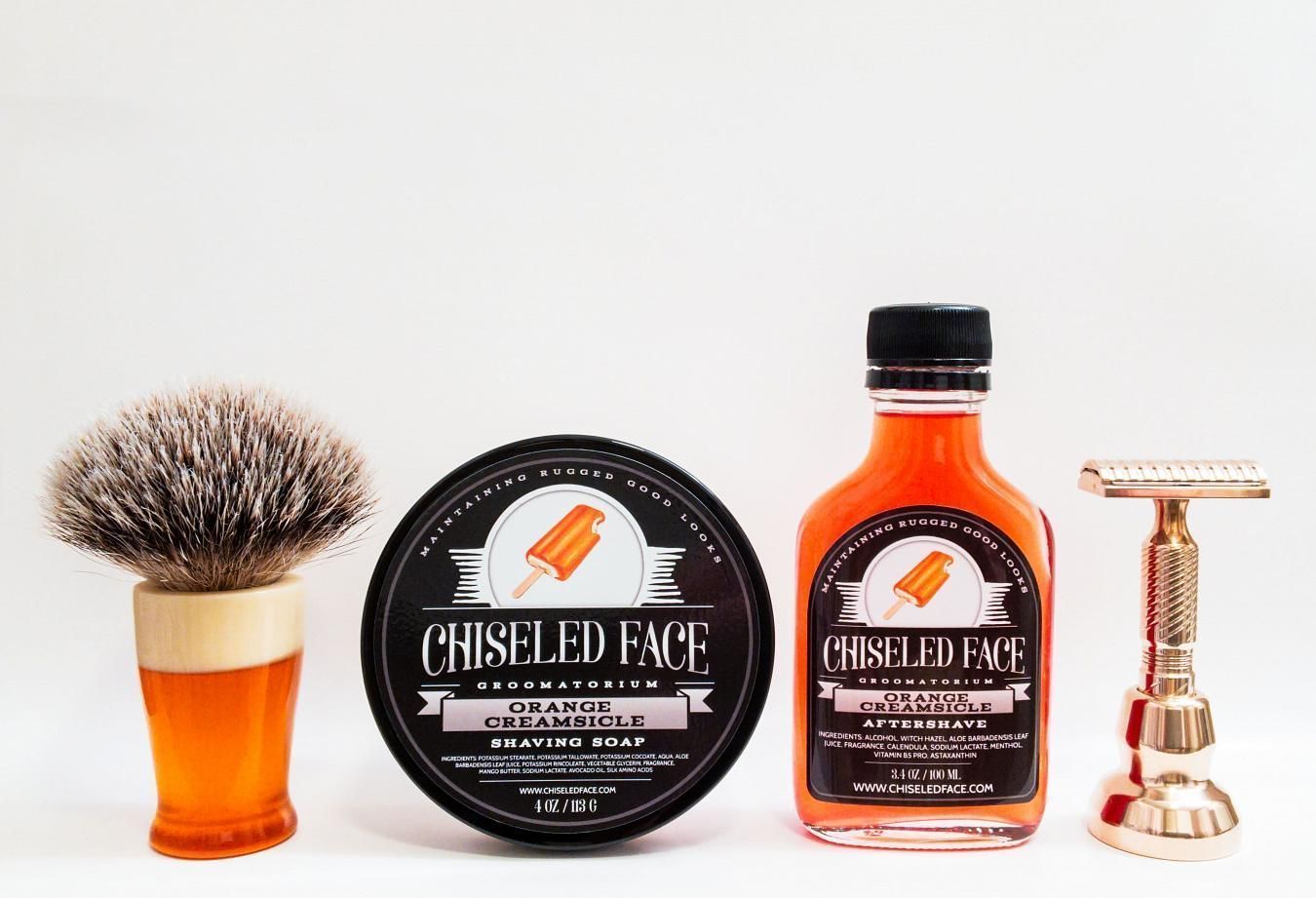 Software based on a true summertime classic, melding orange and cream with a hint of chill - Chiseled Face Orange Creamsicle #soap and #aftershave!

Perfect for any hot summer day – or any day you wish was summer. This one is simple. This is the scent of an orange creamsicle with some menthol added to provide the cooling power of a popsicle.

I've done a large number of reviews on #chiseledface products here, so I won't get into the performance much today. Click that hashtag to check 'em out for more info. This review won't be too different from the most recent review of the new Chiseled Face Bay Rum. But to summarize, the lather is abundant, somewhat dense and very slick on both primary and residual with a nice resulting face feel. It's a fine lather, especially for the money - performing well above its price point. The aftershave is a little more average, with so-so healing and moisturization properties, but a lovely face feel.

The scent is exactly as the name implies... Orange Creamsicle. Combining notes of orange and cream there's also a nice splash of menthol to complete the illusion. Overall scent strength of the soap is a light medium, but the aftershave kicks it up a notch to a medium. The scent itself is a dead ringer for the tasty summertime treat. It's a little lighter on the orange and a little heavier on the cream. It's not altogether different than The Holy Black Ramos Gin Fizz which adds just a hint of juniper to the mix. Adding even more complexity but still in the same vain, you're closer to Chiseled Face Santa Paula Citrus.

I've waffled on Orange Creamsicle ever since it first debuted a couple of years ago. It's such a nostalgic scent - who can resist - and for how long? It was last year when it was announced that it would come back, at least temporarily. When the Chiseled Face Bay Rum was released on January 20, 2018 it was a no-brainer to grab a set of it finally... Seeing as how it was still available - almost mocking me for daring to continue resisting. What I really want is a Dole Whip scented software combo but that's a story for another day.

Hardware was my go-to this week - the #TimelessRazor #TRBR38 (which will become the TRBR78 tomorrow) with a #PolSilver blade on shave three. The brush that seemed almost made for this shave (at least in color) is a lovely #ThatDarnRob "beer" brush with a 22mm silvertip badger knot in it. Funny story; it fits the hole for a 24mm knot and blooms like a 26mm knot (and then some). It's exquisite. Soft, pillow like. I've been really into synthetic knots lately, that it's nice to use a real badger knot every now and then to remind you of the luxurious feel. The #GTP scuttle did its usual business.

Man, what a throwback! The smell of Orange Creamsicle is spot on, and the menthol really brings it home. The aftershave even lingered for a good while (though I might suggest a more "proper" scent to head out with). Really looking forward to using this combo again... I'm a sucker for anything citrus. Also, stay tuned for tomorrow's report on the new .78mm gapped open comb baseplate!