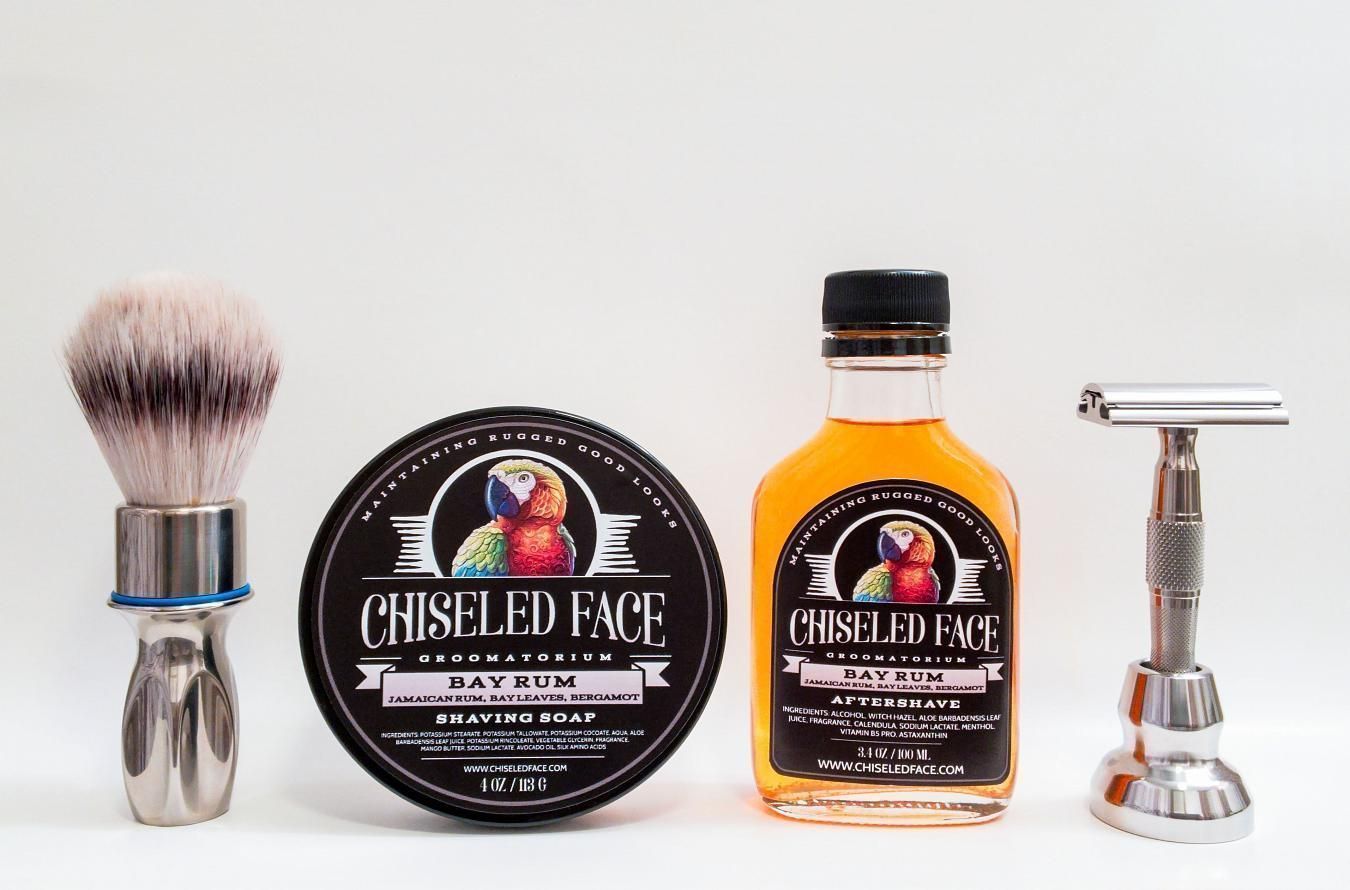 Come meet the newest bay rum on the block! One that's true to the classic yet unique enough to warrant a spot on the shelf - Chiseled Face Bay Rum #soap and #aftershave!

We've wanted to do a bay rum for years, but it took a while to get things the way we want.

This is a tropical bay rum - quite different than most bay rums on the market today - this one actually has a bit of a rum kick to it and is spiced up with ginger and lime to give it a lighter more tropical feel.

I've done a large number of reviews on #chiseledface products here, so I won't get into the performance much today. Click that hashtag to check 'em out for more info. But to summarize, the lather is abundant, somewhat dense and very slick on both primary and residual with a nice resulting face feel. It's a fine lather, especially for the money - performing well above its price point. The aftershave is a little more average, with so-so healing and moisturization properties, but a lovely face feel. Released on January 20, 2018 it made some waves simply owing to the fact that it's a new scent from this artisan...

The official notes include Jamaican rum, bay leaves, bergamot, lime, clove, cinnamon, ginger, black pepper and vanilla. On the surface, it's not altogether different than a lot of bay rums, but a few notes stand out. There's obviously the bay leaves (pimenta racemosa) that gives them all that prominent bay twang. Then there's variations on citrus. Traditionally, clove is part of the bay rum scent, but more artisans than not decide to forego it. Some use allspice, here it's cinnamon. Either way, these add that "spice" kick. There's also a black pepper here, which is nice and somewhat different. But with the Chiseled Face take on this classic, it's the ginger and vanilla that really set it apart.

Indeed, if you were to snuff the tub, you get an overwhelming hit of ginger. As I always say; don't judge a scent by the tub. This is a perfect example. In the tub, dry - it smells a bit... Weird. But once water hits it, or you go straight to the aftershave... Is when the scent really comes together. Yes, there's a strong ginger influence up top, but it mellows nicely throughout the dry down. The vanilla kind of binds it all together and adds warmth. While I'm generally not really "into" clove, I think it's refreshing to see this quintessential ingredient represented. It goes with the bay leaves and the overall bay rum theme.

As a bay rum, Bay Rum is an excellent take on this staple of shaving scents. Does it stand out or go in a different direction as claimed? A little. But not as much as say, Dr. Jon's Anne Bonny or Tallow + Steel West Indies which isn't even so much a bay rum as it happens to have bay leaves in it, or Tallow + Steel Grog which strays even farther from the norm. My favorite not-bay rum though, remains Chatillon Lux Blackberry Blossom Bay. I think this is a little closer to the traditional interpretation, like Wet Shaving Products Bay Rum or Barrister and Mann Bay Rum - and that's not a bad thing. It's different enough to merit having for several reasons...

If you're a fan of bay rums, that goes without saying. It's also unique enough so as not to feel like you're just doubling up on another bay rum. Then there's the fact that it's a Chiseled Face product; an excellent performer and at $14.99 each for the soap and aftershave, excellent value. I've been a fan of their products ever since I got Chiseled Face Summer Storm (and perhaps still my favorite of theirs specifically). Surprisingly, the longevity is an impressive 6 hours or so! Well above average for bay rums. Bay Rum is a lovely rendition of the classic and all the metrics tick the right boxes!

Hardware for today was the #TimelessRazor stainless steel, .68mm gapped straight bar and smooth capped "mild edition" as I like to call it, with a #Stork titanium handle and a #Voskhod blade on shave three. The last two shaves, something didn't seem right; the blade a bit "draggy" or tough in cutting (not so much tugging). My first pass today really highlighted that, and the feel wasn't the same on both sides. I re-seated the blade/head twice and it finally felt normal and even - but oddly (and overly) mild. I've also tried these blades in the Mühle R41 and Tatara Razors Masamune with similar results. I don't think I care for them. At any rate, the #BSB Shaving Brush with its 25mm Mühle Silvertip Fibre knot did a fine job whipping suds in the #GTP scuttle.

A lovely shave with a classic, yet somewhat unique take on bay rum. I really enjoyed it and I'm sure you will too. Solid performance and excellent value make this one a no-brainer, especially if you're a fan. The hardware did its thing, despite some oddities with this Russian blade. I'm happy... Happy Friday!