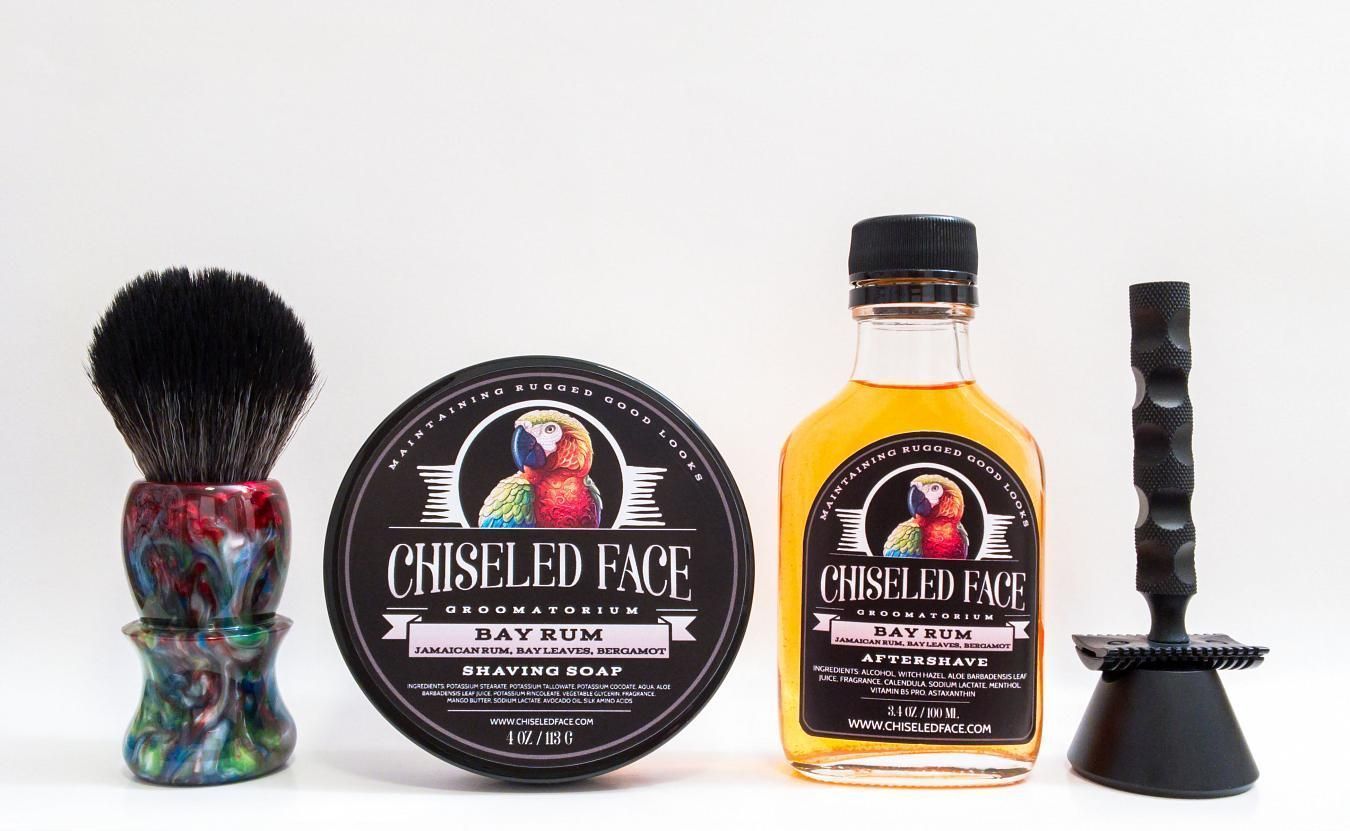 A bay rum that's true to the classic - yet unique enough to warrant a spot on the shelf - Chiseled Face Bay Rum #soap and #aftershave!

We've wanted to do a bay rum for years, but it took a while to get things the way we want.

This is a tropical bay rum - quite different than most bay rums on the market today - this one actually has a bit of a rum kick to it and is spiced up with ginger and lime to give it a lighter more tropical feel.

I've done a large number of reviews on #chiseledface products here, and reviewed Bay Rum specifically - so I won't get into that much today. Check both out for more info. But to summarize, the lather is abundant, somewhat dense and very slick on both primary and residual with a nice resulting face feel. It's a fine lather, especially for the money - performing well above its price point. The aftershave is a little more average, with so-so healing and moisturization properties, but a lovely face feel. Released on January 20, 2018 it made some waves simply owing to the fact that it's a new scent from this artisan...

The official notes include Jamaican rum, bay leaves, bergamot, lime, clove, cinnamon, ginger, black pepper and vanilla. On the surface, it's not altogether different than a lot of bay rums, but a few notes stand out. There's obviously the bay leaves (pimenta racemosa) that gives them all that prominent bay twang. Then there's variations on citrus. Traditionally, clove is part of the bay rum scent, but more artisans than not decide to forego it. Some use allspice, here it's cinnamon. Either way, these add that "spice" kick. There's also a black pepper here, which is nice and somewhat different. But with the Chiseled Face take on this classic, it's the ginger and vanilla that really set it apart. There's a strong ginger influence up top, but it mellows nicely throughout the dry down. The vanilla kind of binds it all together and adds warmth. While I'm generally not really "into" clove, I think it's refreshing to see this quintessential ingredient represented. It goes with the bay leaves and the overall bay rum theme.

As a bay rum, Bay Rum is an excellent take on this staple of shaving scents. Does it stand out or go in a different direction as claimed? A little. But not as much as say, Dr. Jon's Anne Bonny or Tallow + Steel West Indies which isn't even so much a bay rum as it happens to have bay leaves in it, or Tallow + Steel Grog which strays even farther from the norm. My favorite not-bay rum though, remains Chatillon Lux Blackberry Blossom Bay. I think this is a little closer to the traditional interpretation, like Wet Shaving Products Bay Rum or Barrister and Mann Bay Rum - and that's not a bad thing. It's different enough to merit having for several reasons...

The hardware for today consisted of the Frankenrazor that is a #Yaqi matte-black Mellon head, a Shaving Shop Assassin razor handle and a #StandardRazors stand with a #PolSilver blade on shave four. The #LowbornSupplies brush sports a 24mm BOSS knot; the picture doesn't do the dazzling colors of the resin handle justice. It's amazing, and goes perfectly with the guacamayo (macaw) of the artwork. And yup, the #GTP scuttle did its business as well.

A truly classic scent, bay rum stands out from the usual crowd... Just like pirates did back in the day when they wore it. It's also fun to see how each artisan interprets the scent, and for the fans - this one's unique unto itself. The performance is a given and the price is very reasonable. High marks all around for this software!