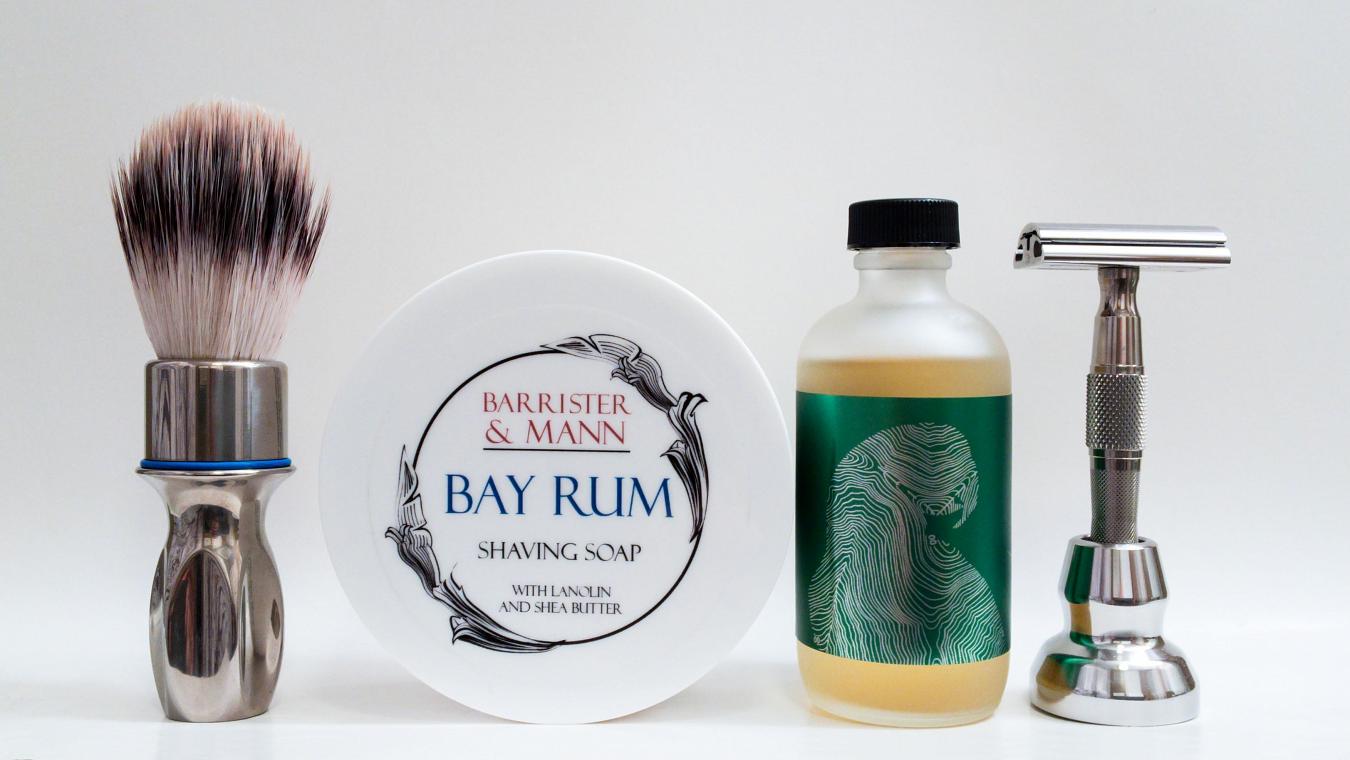 Avast, me hearties! Anchors aweigh and hoist the sails - it's time to haul wind as a storm's a'brewin! A fittin' #HumpBay shave by way of Barrister and Mann Bay Rum #soap and #aftershave, aye.

Way back in the glory days of salty sea dogs, sailors used rum tinctures of West Indie bay and spices as disinfectants, fragrances, deodorants, and aftershaves. Over time, many famous fragrance and shaving houses adopted the custom and offered their own versions of the classic scent, which proved to be extremely popular with barbers as well.

Barrister and Mann is proud to offer our own version of a classic Bay Rum. Dispensing with the modern custom of using large amounts of clove, we instead blend real black strap rum with West Indie bay, sweet orange, cinnamon, and benzoin (a vanilla-like resin). Our Bay Rum is a warm, masculine classic, a piece of history, and a favorite for winter, but is well-suited for any time of year.

First off, I'd like to take a moment to offer my thoughts and good vibes to my Floridian (and Caribbean) friends and family... Hopefully Hurrican Irma will be a kind wench to ye.

Not too much to report today, save for the aftershave. I've already reviewed Bay Rum a while back, being of the earlier "white label" variety. Alas, back in the day there was a matching aftershave, albeit in the long since discontinued Kyovu variety. A long time coming, the Tonique version, complete with updated artwork and packaging finally arrived on July 7, 2017. It features... What else? But a parrot!

The aftershave is typical for Barrister and Mann Tonique - it's a solid performer in terms of healing and moisturizing, the penultimate juice, bettered only by Barrister's Reserve which fares better across the board. The scent of course, is the well-known and excellent quality you'd expect from Barrister and Mann with ample sillage and longevity. This particular scent, Bay Rum suffers the same fate as most all others, however; longevity is somewhat short-lived. Nature of the beast... It's hard to make a bay rum last as the pimenta racemosa is fleeting. The other notes serve to carry it a little while longer, but in the end... It's a fairly standard bay rum as far as longevity. As for the accord overall, it's a very nice take on the classic bay rum but doesn't break the mold too much. It's a kinder, gentler bay rum - suitable for everyday use. No worries for the clove haters out there; there is none here. It's a warm, spicy and vanillic affair with an orange rather than a lime citrus - and of course, bay.

Hardware befell the #TimelessRazor with a #Stork handle, a #PolSilver blade on shave four. The #BSB Shaving Brush was dusted off, as it's been feeling left out as of late - and had its way with the lather in the #GTP scuttle, generating gobs of warm lather.

A great bay rum, which sadly doesn't last that long... As is the case with 99% of them. Somewhat standard in its take - but different enough to warrant attention and ownership. It's not as far out on a limb as say, Dr. Jon's Anne Bonny or the more recent Tallow + Steel West Indies (which technically, isn't billed as a bay rum). But classic performance and worth getting a hold of... Especially come September 22, 2017 when the new Glissant version makes its appearance, complete with new packaging and artwork, befitting of the new aftershave.